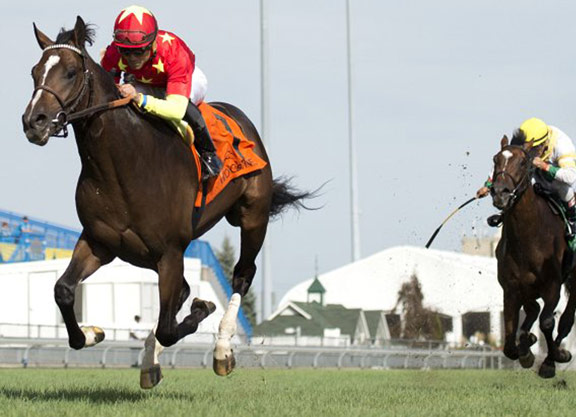 Good Samaritan took his record to a perfect two-for-two Sunday, following a professional debut graduation with his first graded tally in this “Win and You're In” event for the GI Breeders' Cup Juvenile Turf. Breaking sharply, the bay was rated back to trail the field early as 60-1 shot The Craic (Sidney's Candy) and fellow New York invader Harlan's Harmony (Spring At Last) duked it out through early fractions of :23.21 and :46.01. Patiently handled by pilot Joel Rosario, Good Samaritan was inched closer on the backstretch and swung out six wide to launch a bid turning for home. Powering down the center of the course, the juvenile swiftly inhaled his rivals and cruised clear under a hand ride to win as he pleased.

“He's very professional,” said Rosario, who also was aboard for Good Samaritan's debut win. “When he starts running he's very focused–when I rode him last time he was the same way. He's shown that he had a lot of talent. He may have a good future.”

Overlooked at 9-1 in his 1 1/16-mile unveiling over the Saratoga lawn, Good Samaritan raced three deep early before tucking in to save ground near the back of the pack and closed strongly in the lane to get up just in time for a head success. He was one of three juvenile winners at the Saratoga meet for the partnership between China Horse Club and WinStar Farm, which started with GI Champagne S. winner Daredevil (More Than Ready) last year. They were also represented at the Spa by the Todd Pletcher-trained duo of “TDN Rising Star” Theory (Gemologist) and One Liner (Into Mischief). The powerhouse partnership have been steadily expanding their stable at the still ongoing Keeneland September sale with nine yearlings purchased so far for a total of $3.935 million (Click here for sale story).

Bred by co-owner WinStar Farm, Good Samaritan hails from the family of MGSWs Wiseman's Ferry (Hennessy) and Caress (Storm Cat), the sam of GISW sire Sky Mesa (Pulpit). He is the third foal out the stakes-placed Pull Dancer, who has since produced a yearling colt by Pioneerof the Nile and a weanling filly by Tiznow. She was bred back to Bodemeister.