Click here to watch the Fasig-Tipton Midlantic Under Tack Show.

Hard Road After Brexit Can Still Be Eased 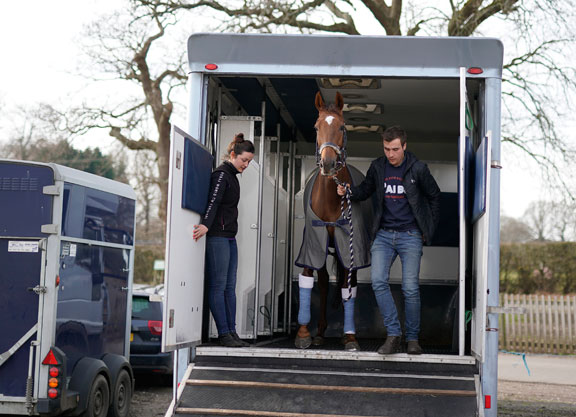 There is a species of fish called the Atlantic Horse Mackerel. Maybe we could generate due political attention and energy if we started racing them, instead of Thoroughbreds. As it is, the relative economic footprints of the fishing industry and equine sport appear wholly immaterial when it comes to the emotional imperatives of Brexit.

Across the political spectrum, and across the world, we have become bleakly accustomed to the increasing puerility of political discourse. Complex policy dilemmas are contorted into their most provocative form, with the shallow volatilities of social media cynically harnessed to ideological agendas.

Fishing has become a notoriously literal adaptation of the insularity that coarsened so much of the Brexit debate. And now that the debate has moved on, to what happens next, the same gusts of childish territorialism are enabling hijackers and pirates–the political captains addicted to gesture and bravado, rather than the diligent and patient business of sealing leaks or repairing torn sails and nets–to drive us all towards the rocks of no deal.

This is not the place to highlight the hazards that actually loom, as a result, for British trawlers (which export the majority of their catch). But what our own industry does need to understand is how governments are meanwhile setting adrift the ferries transporting our horseboxes from December.

How many of us are truly aware of the consequence of a hard Brexit, followed next spring by the 2021 E.U. Animal Health Law? Certainly I had no real sense of the catastrophic impracticalities ahead until the publication, this week, of a dossier compiled by a Task Force representing a variety of international industry federations.

They have been convening weekly since May. One of the most elementary premises of their analysis was to compute, for the first time, the collective economic value of racing, breeding and equestrianism in Europe. At €52.1 billion per annum, with a payroll of 210,000 direct jobs and over 500,000 overall, it far exceeds the fishing industry.

Apparently, however, that is not enough for the British, Irish and French governments to prioritise a replacement for the tripartite agreement that has long facilitated the free movement of elite horses. Evolved over 50 years, that exemplary agreement both verified and streamlined the health status of horses, applying international codes of practice for the control of equine diseases, including such virulent conditions as CEM, EVA and EIA.

Absolutely fundamental as these precautions are, the three relevant governments have apparently manifested a staggering fatalism about the agreement lapsing with Brexit. As things stand, the routine but priceless traffic of Thoroughbreds–traffic predicated, whether for competition or breeding or sale, on certification of the highest status of health and welfare–is going to be drastically affected.

If no trade deal is agreed, Britain will in December assume default “third country” standards for trade. That will entail isolation and residence requirements, disease testing, export health certification, and E.U. entry through designated Border Inspection Posts. Next April, however, still more stringent restrictions will be enforced by the E.U. Animal Health Law. You could certainly forget the “walk-in” mare crossing between the U.K. or Ireland to visit a stallion.

Already from December we can look forward to horseboxes joining queues of freight held up at ports and frontiers. Moreover the construction of Border Inspection Posts, hitherto unnecessary for the movement of horses, has been suspended in response to the latest Wild West exhibitionism from those directing the British negotiating strategy.

And, by the way, you can see the Machiavellian calculations behind legislation that deliberately flouts international law. Having flushed out nearly all the parliamentarians of old-fashioned principle and honour from the party of government, those holding the tiller now just need the House of Lords to make a stand instead. Then, perhaps, we will again hear the disingenuous, incendiary hue-and-cry about “elitist” obstruction of the popular will.

Even if such inspection points were ready for use, however, no layman could begin to grasp the terrifying risk to highly-strung mares with foals at foot; or a yearling on its way to a sale where it might be valued in millions; or a champion travelling for a race dependent for its Group 1 status on international competition.

More than half the horses sold at the principal Tattersalls sales, remember, have either arrived from an E.U. nation or will be sold to one. And of the Thoroughbreds sold by Irish vendors, at an estimated annual value of €438 million, 76% were exported to Britain in 2019.

Nor are the problems confined to traffic in and out of Britain, which also serves as landbridge for thousands of horses annually travelling between Ireland and France, and all points of the European continent beyond. The unusually dynamic working life of the racehorse can be measured by 20,892 cross-border movements, temporary or permanent, recorded between France, Ireland and Britain in 2017.

Then there are the tariffs likely to arise from the UK's new status as a “third country”; and VAT differences between the UK and E.U. But the real runaway train, hurtling down the tracks, is the E.U.'s new Animal Health legislation, which stipulates residency requirements prior to travel.

Think of the nightmares created for sales consignors and auction houses, if you have to accommodate all stock on site for the critical 30 days leading up to its appearance in the ring. Conversely, a maximum residency of just 90 days is ordained for mares visiting stallions. Ninety days! For a pregnant mare to arrive safely in advance of her due date; to deliver her foal; to return to a coverable oestrus, and potentially require repeat covers; and to be verified as in foal after a reliable interval.

The Task Force wants to spread awareness of these appalling challenges. But it also wants to meet them. Perhaps the most instructive utterance of the whole Brexit saga was that Britain “has had enough of experts.” But the assiduous example of these far-sighted and public-spirited horsemen could be usefully borrowed by those too busy brandishing flags or sabres to devote themselves to actually recognising and solving problems. As things stand, unfortunately, the solution proposed by the Task Force has yet to be embraced by governments and regulatory authorities.

That solution, self-driven and self-funded by the industry, already exists: the digital passport. The Task Force dossier elaborates its real-time efficiency and reliability in terms of integrity, biosecurity, traceability and welfare. Told that the paper passport system must continue, its authors have suggested a compromise. (Quaint notion! Can they please take over the broader negotiations, once their work is done?) They now urge a dual system, in which paper and electronic passports can operate in tandem.

It is not too late; not quite yet. The calamitous hobbling of international equine traffic is still preventable. A comprehensive Free Trade Agreement would maintain uninhibited movement of both “high health” horses and temporary movements of their essential, skilled companions, from grooms to veterinarians to jockeys. But every restriction on that fluid ecosystem will cause grave economic damage to an industry that already operates on precarious margins.

The Task Force is not looking to cause panic. But it does need us all to heed its warnings, and assist its lobbying. Because time is running out. And if you think all this is too difficult, wait until you have to put a saddle on a fish.