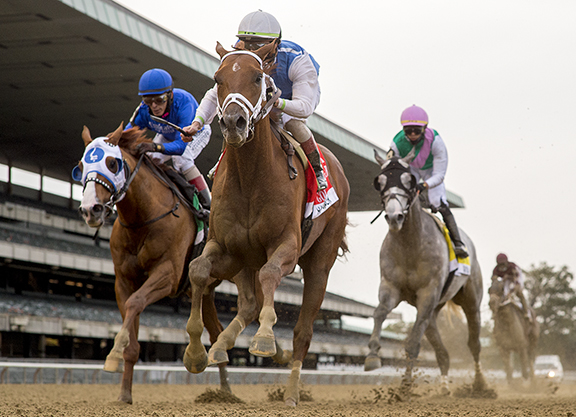 Away on top from his rail draw, the chestnut settled in along the fence as July's track-and-trip GII Suburban S. winner Tacitus showed the way and Mystic Guide tracked outside of Happy Saver. Happy Saver required some energetic handling to keep pace as Mystic Guide ratcheted up the pressure on the leader past six panels in 1:13.61. Tacitus came off the fence a path while preoccupied with Mystic Guide to his outside, giving Happy Saver just enough room to make his move. Happy Saver kicked his way through by midstretch after Mystic Guide had already taken over, and lowered himself gamely from there to outstay his competition.

“We were OK with [not having the lead],” said trainer Todd Pletcher, who was celebrating his first Jockey Club Gold Cup win after Vino Rosso (Curlin) was taken down 12 months ago. “I told Irad [Ortiz, Jr.] in the paddock that usually I have a little idea of a plan, but this one was tricky to me. Everyone has the same style and I don't think anyone really wants to be on the lead, but someone is going to inherit it, so just play it by ear.

“Watching the race, I thought he was a little uncomfortable inside there. He was in a tricky spot. Johnny [Velazquez, aboard Mystic Guide] had first run on him and was able to keep him in there. To his credit, that was a pretty game performance to come up the inside there in his fourth start and first time against older horses going a mile and a quarter. To do that after breaking his maiden on June 20th is hard to do.”

Ortiz offered: “He has a big heart, like I told Todd in the paddock. He's a fighter. Every time he has a horse in front of him and when you ask him to go, he passes the horse and then he puts his ears up. He still had something after he went by Johnny's horse.

“It was emotional. I wanted to win it so bad. Last year, I got DQ'd and that was for Todd, too. He's a cool horse, a special horse. I rode him first time out and we knew he was a nice horse. Todd has always liked him.”

Pletcher added, “I was very proud of the horse and his performance. I'm happy for the connections, the Wertheimers have been loyal supporters for many years and I'm appreciative of that. It's great to get a Grade I win for them. He's by a Derby winner we trained, so it's fun all the way around.”

As for whether Happy Saver would take the next logical step and contest the Breeders' Cup Classic, the conditioner said, “First and foremost we'll see how he bounces out of this race. It was a tough race and he's still a lightly raced horse. That's part of the reason we decided to come here instead of going to the [GI] Preakness [last Saturday]. We'll enjoy this for the moment and talk to the Wertheimers and come up with a plan. I wouldn't say we're definite for it, but I wouldn't rule it out either.”

He is the 15 Grade I winner (47 graded) out of a mare by top broodmare sire Distorted Humor. Dam Happy Week was a $600,000 KEESEP yearling purchased in 2018 who was multiple stakes-placed for these connections in addition to being taken down from third in the GII Shuvee H. at Belmont in 2011. She produced a Candy Ride (Arg) filly in 2019 and a full-sister to Happy Saver Feb. 3 before being bred back to Sky Mesa. Happy Saver's third dam is Weekend Surprise, the blue hen dam of A.P. Indy, Summer Squall, et al.