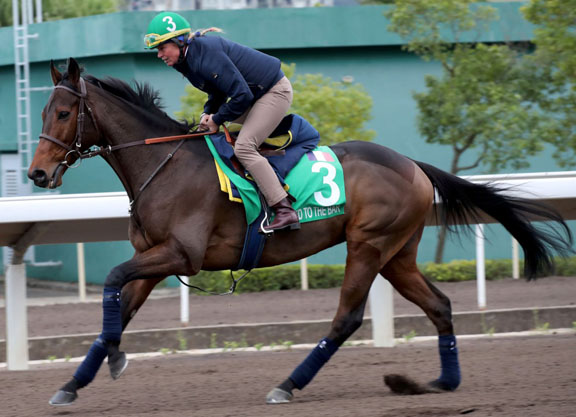 Called To The Bar | HKJC photo

HONG KONG–In 1976, owner Sven Hanson exceeded his budget by 6,000gns to acquire a then-yearling filly by Petingo (GB) for 13,000gns at the Tattersalls Houghton Yearling Sale. It was his very first purchase of a racehorse.

Named Fair Salinia (Ire) and turned over to Michael Stoute, the daughter of Fair Arabella (Chateaugay) was runner-up in the 1977 G1 Cheveley Park Stud S. and would go on to victories in the G1 Epsom Oaks (final 300 metres), G1 Irish Oaks and G1 Yorkshire Oaks.

Not an entirely bad way to get into the business.

Some four decades later, Hanson and his wife Carina remain as active as ever and the couple returns to Hong Kong this week with Called To The Bar (Ire) (Henrythenavigator), looking to add to the considerable success they have already achieved in the jurisdiction.

The 5-year old will mark the fourth appearance at the international meeting for the Swedish couple, who now reside full time in Switzerland after selling their French property at Haras de Vieux Pont in May 2016. They purchased the former dairy farm in Normandy in 1992.

The Hansons made their first visit to Hong Kong in 2005 with the Alain de Royer-Dupre-trained Pride (Fr) (Peintre Celebre), who tipped the scales at a whopping 932 when facing the likes of local hero and reigning Hong Kong Derby hero Vengeance of Rain (NZ) (Zabeel {NZ})–who outweighed her by 247 pounds–in the 2005 G1 Hong Kong Cup. Piloted that day by Christophe Soumillon, Pride switched out wide and came after Vengeance of Rain in the final 50 metres, but her dive fell just short (video). Kept in training for a 6-year-old campaign, Pride made the return trip to Sha Tin the following December and made amend–albeit just–holding off a late challenge from Japan’s Admire Moon (Jpn) (End Sweep) to close her career on a high note (video).

“It was, of course, wonderful to win that as her last race,” Carina Hanson said. “The year before she had been beaten by a nose and then she beat a good horse the next year, so we were one and one. It was great to have her finalize her career that way.”

Pride’s son One Foot In Heaven (Ire) (Fastnet Rock {Aus}) brought the Hansons back to Hong Kong following a brilliant 4-year-old season in 2016 which saw him land a trio of group races at home. The bay did his family proud, rallying from far back in the field to finish a meritorious third in the Vase to Satono Crown (Jpn) (Marju {Ire}) and Highland Reel (Ire) (Galileo {Ire}).

The Hansons bred Called To The Bar’s first two dams, including G3 Prix Penelope winner and G1 Prix Saint-Alary third Perfect Hedge (GB) (Unfuwain), who had been responsible for the stakes-placed runners Stand My Ground (Ire) (Cape Cross {Ire}) and Defrost My Heart (Ire) (Fastnet Rock {Aus}) prior to producing Called To The Bar in 2014. The 5-year-old gelding is co-owned by the Hansons along with trainer Pia Brandt. Sven Hanson explains that the colt was imperfect, but perfectly so.

“He isn’t totally correct in front,” he explained. “Normally we try to sell the colts and keep the fillies, but he was not a sales prospect.”

“And he’s by Henrythenavigator,”Carina interjects.

Added Sven: “He’s been sound all the time in spite of being quite incorrect and we have been very careful with him and with the vet and farrier and so on, to keep him sound.”

Sven explained that the aforementioned Fair Salinia also had her conformational flaws.

“She was very, very offset, and that’s why I could buy her at a reasonable price,” he said. “But she never, ever had training problems because she was very athletic and just put her feet down correctly. They can adapt. If they are intelligent and athletic, they adapt.”

Consistent As The Day Is Long…

Speaking of adapting, Called To The Bar has done just that, having missed the top three just twice in his 16-race career at trips up to 3100 metres. A good third to recent G1 Prix de l’Arc de Triomphe hero Waldgeist (Ger) (Galileo {Ire}) in last year’s G3 Prix d’Hedouville over Sunday’s distance, the bay won the G3 Prix Gladiateur and was a strong runner-up in the G1 Prix Royal-Oak in his final run of the season. He added this year’s G2 Prix Vicomtesse Vigier at ParisLongchamp, was well-beaten by Stradivarius (Ire) (Sea The Stars {Ire}) in the G1 Gold Cup in unsuitable ground and most recently resumed with a successful defence of his title in the Gladiateur. He was an intended runner in the Royal-Oak, but was withdrawn on raceday when the ground once again turned too heavy.

“He’s a very consistent horse. He’s down to 2400 metres this time, but we think he likes that,” Sven Hanson said. “He’s not really a two-mile horse. I would think between 2400 metres and two miles is his ideal distance. But he hasn’t run for three months and I would say that is my only concern.”

Citing the hospitality of the Hong Kong Jockey Club based on their previous experiences, Carina Hanson admits that they’ve been hoping for a horse good enough to take them back to Hong Kong. Though he’ll need to produce something that approaches a career best this weekend, Carina isn’t ruling that out.

“He’s a wonderful horse, very full of life,” she said. “He’s a very happy horse, he loves to run. I’ve been in this game for many, many years and I’ve never seen a horse that is so happy. He wants to run every time.”