Half to Justify Crushes His Competition in 'Rising Star' Fashion 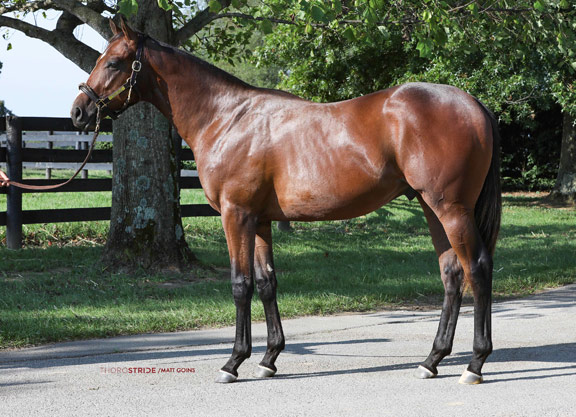 Stage Raider (Pioneerof the Nile), a half-brother to undefeated Triple Crown hero Justify (Scat Daddy), took one more try than his brother did, but followed in that Horse of the Year's hoofprints with a 'TDN Rising Star'-worthy graduation at Keeneland Saturday. Runner-up to another impressive 'TDN Rising Star' in Prevalence (Medaglia d'Oro) in his seven-panel debut at Gulfstream Jan. 23, the bay was hammered down to 9-5 favoritism to get the money this time. Breaking on top, the Gunther homebred was overtaken by a pair of foes just before the first quarter went up in :22.70. Keeping close tabs from third through a half-mile in :45.75, Stage Raider charged up three wide turning for home and stormed clear in the lane, splashing home to a 10 3/4-length victory. Harvard, who is a full-brother to a champion in Classic Empire, was best of the rest in second, making it an exacta for the late Pioneerof the Nile.

Fellow Gunther homebred Stage Magic's first foal was the ill-fated GSW The Lieutenant. Her second foal Holiday Music (Harlan's Holiday) was privately purchased by Jane Lyon's Summer Wind Farm prior too Justify's Triple Crown sweep to begin her new career as a broodmare. Third time was certainly a charm for Stage Magic was two-time Eclipse winner Justify was foal number three and he was followed by Egyptian Storm (Pioneerof the Nile), who was purchased by David Ingordo for $750,000 carrying her first foal by Quality Road at the 2019 FTKNOV sale. Her 4-year-old colt One More City (Will Take Charge) RNA'd for $1.75 million just months after Justify's retirement and is still unraced. Stage Raider was also a big RNA, leaving the ring unsold at $950,000. Stage Magic lost her Quality Road foal in 2019, but had a Curlin filly in 2020 and was bred back to that Hill 'n' Dale stallion.