Half Ours Colt Zips Fastest Quarter of the Week at OBS 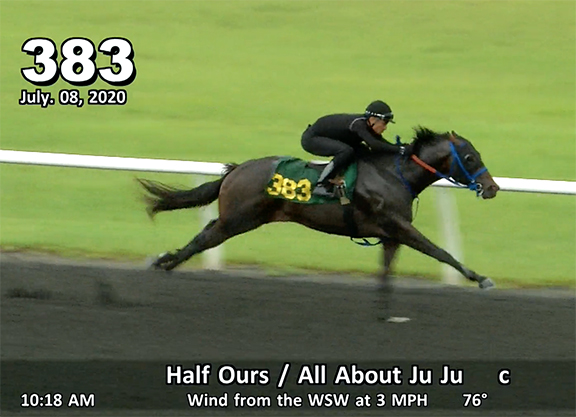 The under-tack show for next week’s Ocala Breeders’ Sales Company’s July 2-Year-Olds and Horses of Racing Age Sale reached its midway point Wednesday in Central Florida and a colt by Half Ours (hip 383) turned in the week’s fastest quarter-mile so far, covering the distance in :20 1/5. The bay colt is consigned by Sergio Centeno’s Blue River Bloodstock and is out of All About Ju Ju (Into Mischief).

“We started training him a little later because we didn’t expect to take him to an April Sale,” Sergio Centeno said. “So we were breaking him a little late to go for the June sale, but then the coronavirus moved all of the sales. But he always showed he had the talent.”

Centeno is also excited about the prospects of a filly he will send out to work Friday at OBS, a daughter of Palace who is catalogued as hip 839.

A colt by Shackleford (hip 492) turned in the week’s second fastest quarter-mile breeze so far when covering the distance in :20 2/5 Wednesday. The gray colt is consigned by Fabian Garcia’s Fabian Sales.

“I was thinking of :21 flat, but he got more than that,” Garcia said with a chuckle. “The track has been pretty slow and it’s been raining all week. This morning it was kind of slow, but he just did what he had to do. Since the first time that I breezed him, he showed that he could do it.”

Hip 492 is out of the unraced Capri Song (More Than Ready) and his third dam is multiple Grade I winner Dispute (Danzig). Garcia purchased the youngster for $3,500 at last year’s Keeneland September sale.

Garcia has been consigning under the Fabian Sales banner for the past four years, but is no stranger to the business.

“I’ve been in the horse business for a long time,” he said. “I’ve been an owner for almost 20 years. But I always put it under someone else’s name. I was working with Nick Zito for a long time. I was a groom for him. And now I work for Eddie Woods. It all came together and here we are.”

During his first three years consigning as Fabian Sales, Garcia was selling his own horses, but his seven-horse consignment at the July sale includes juveniles he will offer on behalf of clients.

Asked if Eddie Woods had given him any advice heading into the sale, Garcia said, “He tells me some good things that I could do to be better every year. I listen to my boss every time. I try to do good like he does. I want to bring in more clients and pinhook more on my own and have people trust me. And to have people know I can do it.”

A filly from the first crop of sprint champion Runhappy (hip 428) worked in :10 flat for Hartley/DeRenzo Thoroughbreds LLC. The bay is out of Bamboo Dream (Finality) and was purchased by Randy Hartley and Dean DeRenzo for $70,000 at last year’s Fasig-Tipton October Yearling Sale.

Hip 473, a daughter of Palace Malice, worked in :10 flat for Hoppel’s Horse and Cattle Co. Out of Breech Inlet (Holy Bull), the bay is a half-sister to stakes placed Merveilleux (Paynter). Pat Hoppel purchased the youngster for $80,000 at last year’s Keeneland September sale.

A daughter of Midshipman (hip 502), consigned by Vargas Sales, also worked in :10 flat. Out of Cat Ten (Greatness), a full-sister to graded placed Flashstorm, she was purchased for $5,000 by Sky High Stables at last year’s Keeneland September sale.

Gene Recio sent out a filly by Maclean’s Music (hip 525) to share the :10 flat bullet time. The dark bay is a daughter of Chokonni (Arch) and from the family of Grade I winner Aldiza. Bred by John Liviakis, the juvenile RNA’d for $37,000 at the 2018 Keeneland November sale and for $14,000 at last year’s Keeneland September sale.

A filly by Not This Time (hip 510) was the last of the day’s :10 flat workers when hitting the track late in Wednesday’s third and final set. Consigned by Oscar Brown Stables, the dark bay is out of the unraced Champagne Sparkle (Street Boss) who is a full-sister to Grade I winner Danza and a half to Grade I winner Majestic Harbor (Rockport Harbor). The April foal was purchased by Lewis Lakin for $95,000 at last year’s Keeneland September sale.

Sixteen horses have now turned in co-fastest :10 flat works this week at OBS.

The under-tack show continues through Saturday with sessions beginning each day at 7:30 a.m. The July sale will be held next Tuesday through Thursday with bidding commencing at 10 a.m.