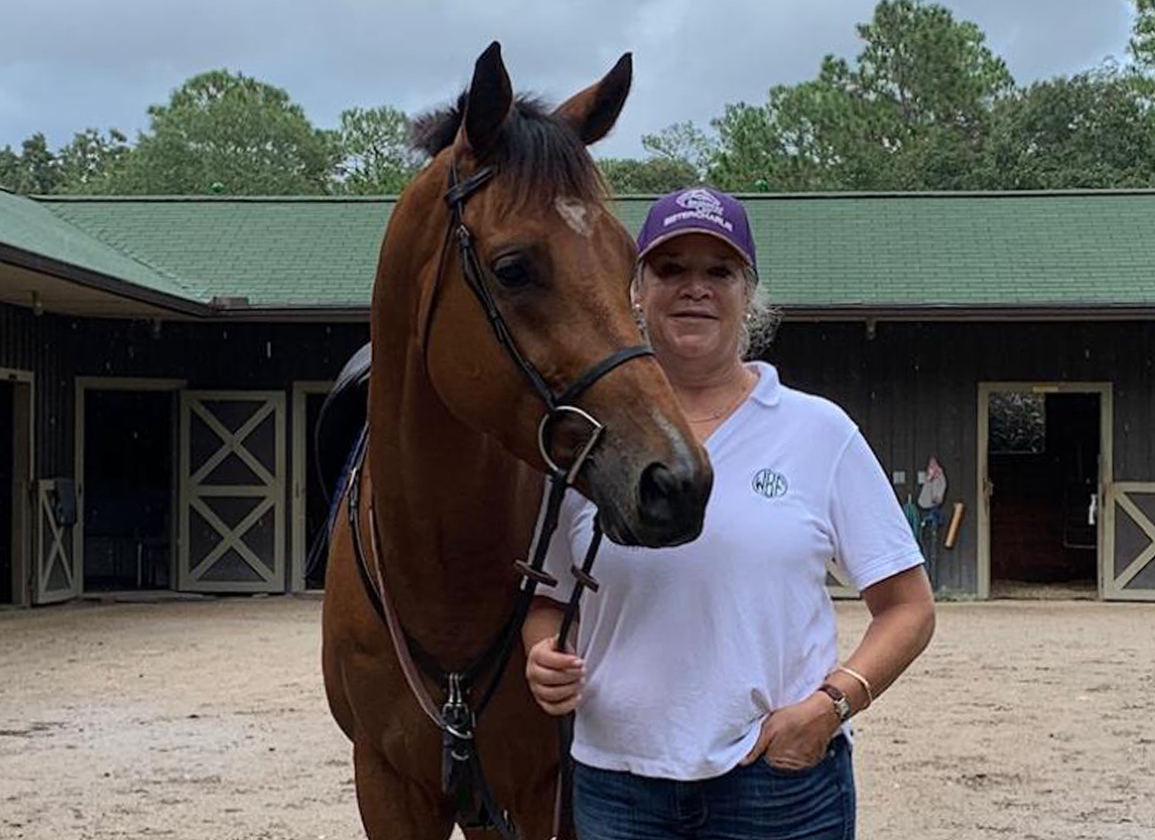 Nearly 200 Thoroughbreds competed in The Jockey Club Thoroughbred Incentive Program (T.I.P.) Championships held earlier this month in Aiken, South Carolina. There were classes covering seven disciplines and there were 26 divisions spanning hunters, jumpers, dressage, combined tests, Western dressage, English pleasure and Western pleasure. That meant a lot of variety among the competitors, all of them with a unique story. There was a 27-year-old horse and a 2-year-old horse. There were horses that didn't accomplish much of anything during their racing careers and then there was one, Two Notch Road (Partner's Hero), who made $536,139 on the track and had two stakes wins. It was a testament to the versatility of the Thoroughbred,

Then there was Radiant Child (Ire) (Charm Spirit {Ire}). He is as well-bred as a horse can be.

Radiant Child's story didn't start well as he never made it to the races. But it will end well. He was placed in a loving home and is now enjoying his second career as a show horse. It shows that any horse, even one who is a half-brother to the winner of the GI Qatar Prix de l'Arc de Triomphe, as well as to an Eclipse Award winner, can be in need of a soft place to land once retired.

Out of the dam Starlet's Sister (Ire) (Galileo {Ire}), Radiant Child was purchased for €400,000 at the 2018 Arqana August Yearling Sale by Peter Brant's White Birch Farm and comes from a family that has been very good to the owner. Brant also owned his half-brother, 2020 Arc de Triomphe winner Sottsass (Fr) (Siyouni {Fr}), and his half-sister, Sistercharlie (Ire) (Myboycharlie {Ire}), the 2018 champion turf female. There's also another talented half-sister that Brant owns, My Sister Nat (Fr) (Acclamation {GB}), the winner of this year's GIII Fasig-Tipton Waya S. for the second time. She has been pre-entered for the GI Breeders' Cup Filly & Mare Turf.

Even when a horse has a superstar pedigree, everything must go right for the horse to be a success on the racetrack. In this case, it didn't. It turned out that Radiant Child had a problem with a tendon in his left hind hock. The Brant team tried everything, including stem cell treatments and gelding the horse, to get him to the races, but, in the end, it was decided that it was in his best interests to retire him without his having had a start.

Brant is one of the most successful owners in the business, but even he will have horses that don't work out. Jean Bickley, Brant's racing manager, said he makes it a priority to find a good home for each and every one. In this case, Brant didn't have to look far. Bickley decided to adopt him.

“When the [2020] season at Payson was ending, the team didn't think he'd ever have the push behind to stay sound so the decision was made to rehome him,” Bickley said. “I'd always loved the horse since we got him, and always said if he ever needed a home I wanted  him. Mr. Brant offered Radiant Child to me because the family is very important to him and he knew the horse would have the best of everything. I've worked for him for 34 years and he's been aware of many of my horse pursuits over the years.” 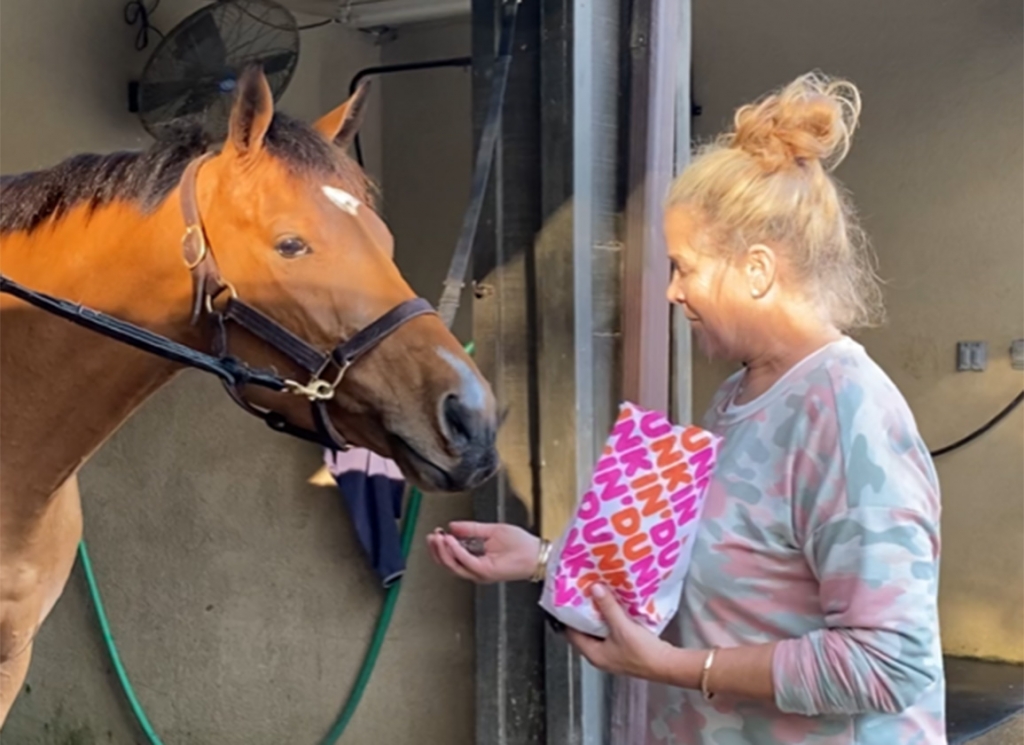 Bickley was looking for a horse she could spend some time with and enjoy.

“My other Thoroughbreds are both older and I was looking for an all-around horse,” she said. “I bought a home in Aiken three years ago so that I could ride out, do a little bit of showing. At this point in my career, I just want to enjoy my horses and maybe show a little. I wanted to have an all-around horse and I thought he fit the bill.”

Radiant Child is now “Dudley,” the barn name given to him by Bickley.

“Dudley is the angel in the film “The Bishop's Wife,” which was my mother's favorite Christmas movie, and Dudley was played by Cary Grant,” Bickley explained. “He's handsome and funny, just like the horse, and charming and everyone liked him. It is the perfect name for him.”

It seems that Dudley has quite the personality. He loves donuts and gets glazed donuts from Dunkin' Donuts every day but Sunday. On Sundays, he feasts on donuts from Krispy Kreme. He's smart and friendly and likes people and other horses. Bickley says he's a dream to own. 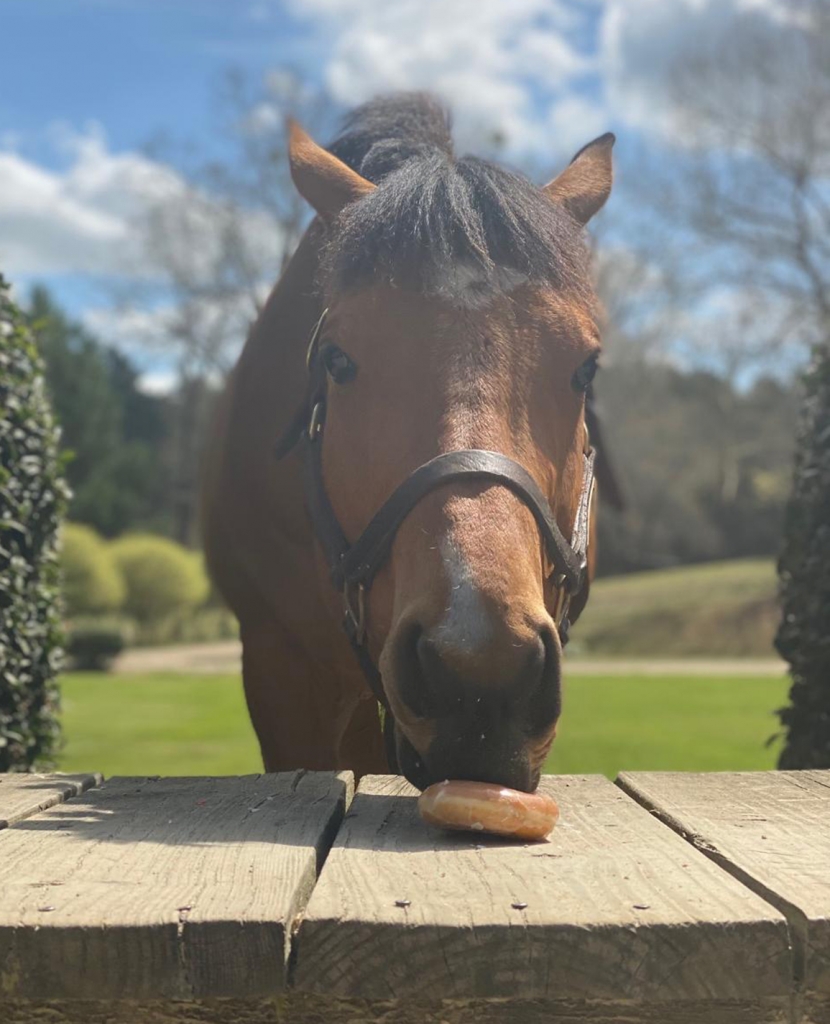 “Everyone who had him said he was just the kindest, sweetest, smartest horse,” she said. “He's very unique because he's probably the most chill Thoroughbred you will ever see. He is beautiful and he comes from a really good family, so, because of that, he gets a lot of attention. He loves all horses. My other horses are quirky, but he doesn't have any quirks. He's just friendly and fun. He's a good ambassador because he's not at all like what some people think of when they think of the Thoroughbred. He has a laid-back personality and is kind. People have misconceived ideas that these horses come off the track and they are all crazy. He is a very good ambassador for Thoroughbreds and how versatile they are and the variety of things they can do if people just take the time to transition them into new careers.”

Radiant Child is a rookie when it comes to his new career, but he's showing promise. Bickley said she will only enter a few shows a year, ones like the T.I.P. Championships, where Radiant Child won the In-Hand Class for 2-year-old to 5-year-old geldings and colts  out of 20 horses and was third in the Championship In-Hand Class.

Bickley would like to see Dudley excel in the show ring, but it's more important to her that he have a good home and a good life. So far, so good.

“He loves this,” she said. “He eats donuts and he hangs out with dogs. He's as happy as a clam.”