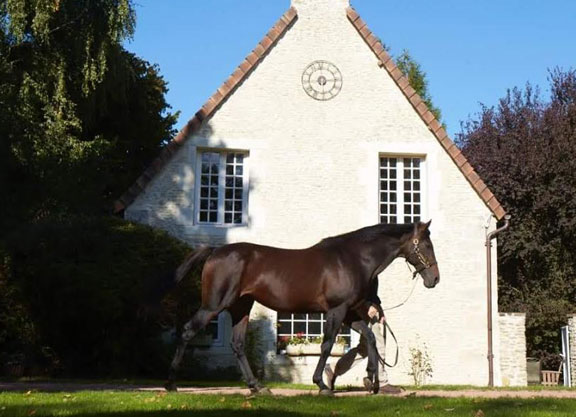 Last September, we reported on the first winner for Tiberius Caesar (Fr), whose 'day job' is to act as the teaser at Haras du Logis. His reward for that frustrating effort comes when he is allowed to cover one mare every year.

The Group 3-winning son of Zieten gave the first hint that he might be due a promotion when his first foal, Tiberian (Fr), won twice as a 3-year-old and finished runner-up in last season's G2 Qatar Prix de Chaudenay. The Alain Couetil-trained Tiberian, who has subsequently been listed-placed this year and wasn't beaten far when fourth in Sunday's G3 Prix d'Hedouville, holds an entry for the G1 Ascot Gold Cup next month.

Now, Tiberius Caesar's second foal, Magnentius (Fr), has maintained his sire's 100% winning strike-rate with victory on Tuesday at Strasbourg for trainer Rodolphe Collet, after finishing second on debut at Chantilly on Apr. 24.

“We were surprised by how quickly Magnentius won after his debut, but we decided to drop him down in class a bit and it was a demonstration, really,” said Julian Ince, who added that the gelding will likely be seen next in stakes company.

He continued, “Magnentius is a pure homebred. Both his sire and dam were rasied here, and both his grandsires stood at Logis.”

The profile of Tiberius Caesar is rising steadily. In addition to the respective solitary members of his first two crops, he now has two juveniles in training––one with Couetil and another in Belgium––and one yearling on the ground.