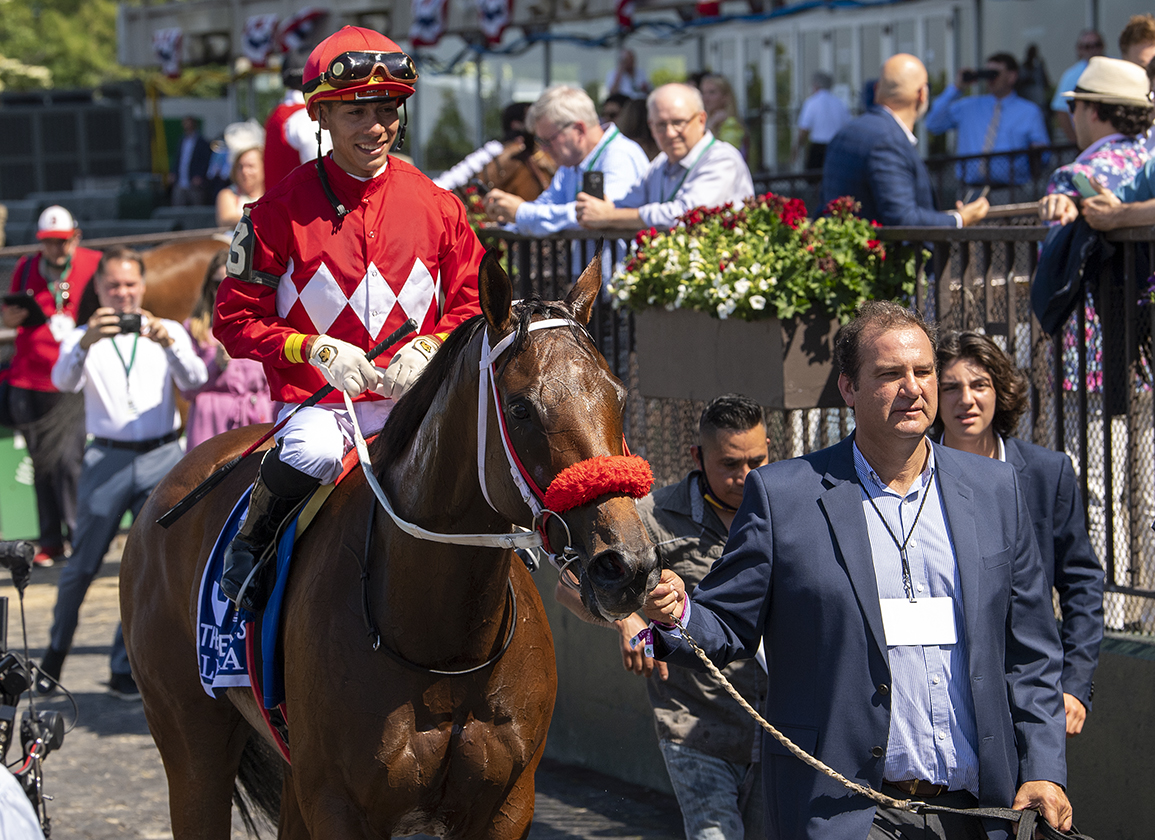 The Personal Ensign S. is probably next for star mare Letruska. From there, the possibilities abound. |     Sarah Andrew

Fausto Gutierrez can remember staring up at the television two years ago watching the GI Apple Blossom Handicap. He was back home in Mexico as Mike Smith piloted Midnight Bisou into the winner's circle with Steve Asmussen looking on. Midnight Bisou would go on to claim championship honors that year, joining the impressive list of Stellar Wind, Forever Unbridled, Untapable, Close Hatches, Havre de Grace, Zenyatta, Azeri and Gourmet Girl as Apple Blossom heroines of this century to also hold an Eclipse title.

Gutierrez knew it was a race exclusively for stars, both equine and human, and while he was a dominant trainer in Mexico at the time, perhaps couldn't help feeling a bit like he was on the outside looking in.

“I never imagined running in that race,” he said. “It's one of the most famous races for mares.”

But on that day, a filly in his barn at Las Americas Racetrack who had gone undefeated in her first three starts was not too far from showing off her true potential. And two years later, that feisty bay named Letruska would win the Apple Blossom for her trainer in one of the most epic stretch battles in the race's history.

Letruska, a daughter of the expatriated stallion Super Saver, was purchased in utero for $100,000 in 2015 by St. George Stable, a massive racing and breeding operation in Mexico owned by mining tycoon German Larrea.

Bred in Kentucky, Letruska was one of six St. George-owned juveniles to ship down to Gutierrez in 2018. She was never a standout in her early training and didn't make her first start until late October of her juvenile season. There, she ran against three other stablemates that had accompanied her on the trip south. Gutierrez said that at the time, he wasn't sure which of the four he would have placed his money on to win.

“In general, all the horses had worked very similarly,” he said. “But come the day of the competition, she won that race and showed something special. After that race, she just kept improving.”

Letruska knocked off five more consecutive wins at her home track, including the G1 Clasico Esmeralda and G1 Clasico Diamante. It was in that last race that Gutierrez said he knew it was time to give the 3-year-old some stronger competition.

“She went the first quarter in :22 flat,” he said. “:22 in Mexico is very, very fast, and maybe it is in the U.S. too. When I saw that time during the race, normally a horse would stop, but she never stopped running and she won very easy. That day I started to understand that she was a very, very special horse.”

Letruska won the Copa Invitacional del Caribe S. against males at Gulfstream, a stepping stone into her foray in the States as a 4-year-old. After claiming another stakes win at Gulfstream in June last year, she stepped up to graded company for the remainder of the season, taking the GIII Shuvee S. and GIII Rampart S.

The pride of Mexico was coming off a win in the GIII Houston Ladies Classic S. and second-place finish in the GII Azeri S. when she entered the starting gate for this year's GI Apple Blossom. It was supposed to be a battle between champions Swiss Skydiver (Daredevil) and Monomoy Girl (Tapizar), but Letruska stole the show, fighting back against Monomoy Girl to get the nose at the last moment and give her trainer his first stateside Grade I win. 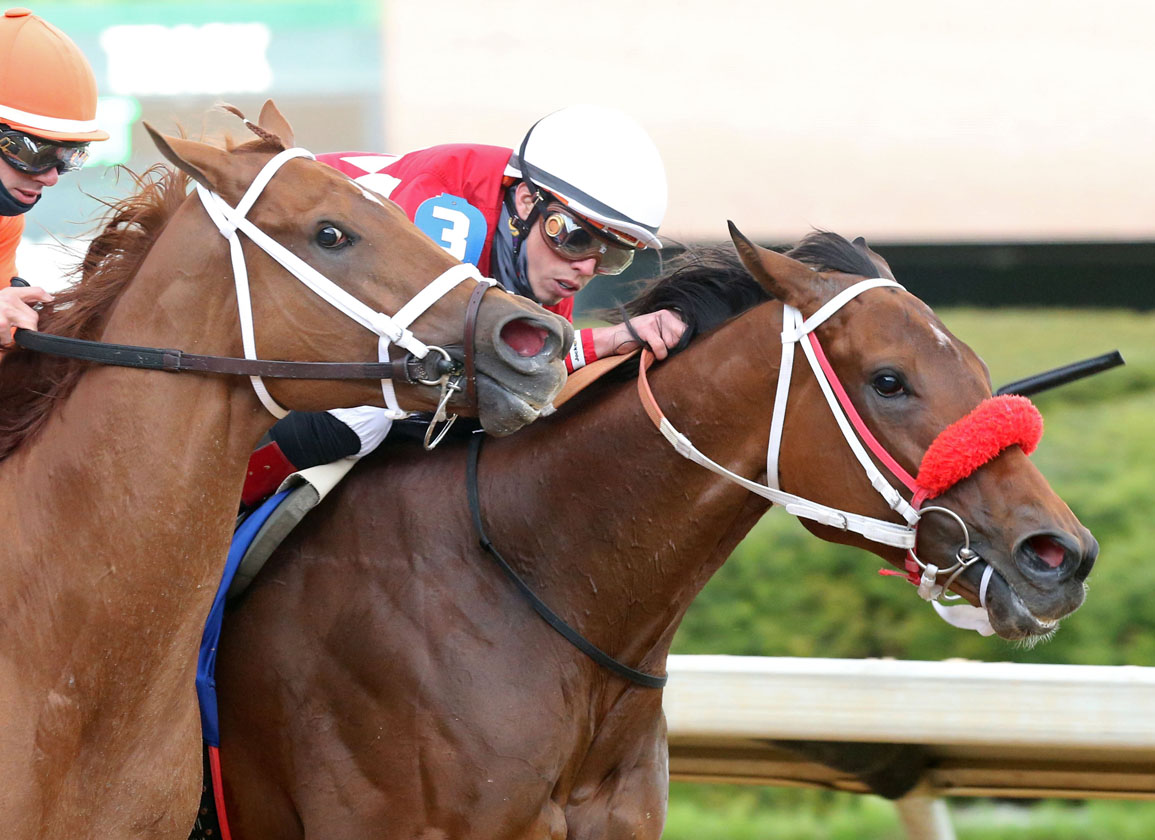 “History put us in a special place in the right moment for that very important race against those two,” Gutierrez said. “Monomoy Girl gave a big, big effort and I'm a big fan of hers. She's been a real champion over the past few years. That day we had the honor to run with her and win.”

When Letruska returned to the winner's circle soon after with a powerful wire-to-wire victory in the GI Ogden Phipps S., earning a career best 103 Beyer number, no on expected to see her in the entries for quite some time. But according to Gutierrez, the 5-year-old mare had other ideas.

“She has a lot of stamina,” he noted. “After the races, she wants to run again. She's not a horse that wants time to recover after a big race. After the Apple Blossom, she felt like she had won something important and so we made the decision to run at Belmont, but we needed to confirm what happened there. When she came back to Keeneland, I started to have problems in the morning because she wanted to gallop and gallop.”

So, Gutierrez nominated Letruska for the GII Fleur de Lis S. at Churchill Downs, set to run three weeks after her Grade I victory at Belmont.

“I thought to myself, 'It's easier to run her than it is to fight with her every morning,'” he recounted. “So we decided to run and I was nervous for that race because I had to be correct and I had more critics. But finally, I knew the horse and I knew what she liked. I understood that she wanted to run all day.”

Gutierrez's gut feeling proved correct when Letruska stamped herself as the leader of her division with an impressive 5 3/4-length score in the Fleur de Lis.

“She ran very well and now we are in a position to make a plan for the second half of the year,” Gutierrez said.

Letruska has remained in training at Gutierrez's base at Keeneland and returned to the work tab on Wednesday with a blazing four furlongs in :46 flat (1/55).

“I think she is just now in the position to give the best she has,” Gutierrez said. “She's very sound and you never know what is possible with a horse like this because she makes it easy and she understands what she's doing and who she is.”

Letruska is unquestionably the queen of the Gutierrez barn at Keeneland, holding court with a traffic cone in front of her stall, a signature item for equine athletes who aren't reserved about asserting their dominance over passersby. Her groom, Jose Diaz, caters to her every need and knows her favorite grazing spots around the barn.

“She's a horse with a very strong character,” Gutierrez said. “If she can beat you, she'll beat you. If she has the chance to kick you, she will. Each racehorse has a different personality, like humans, but she has something special. I think that strong character is what she uses for competition.” 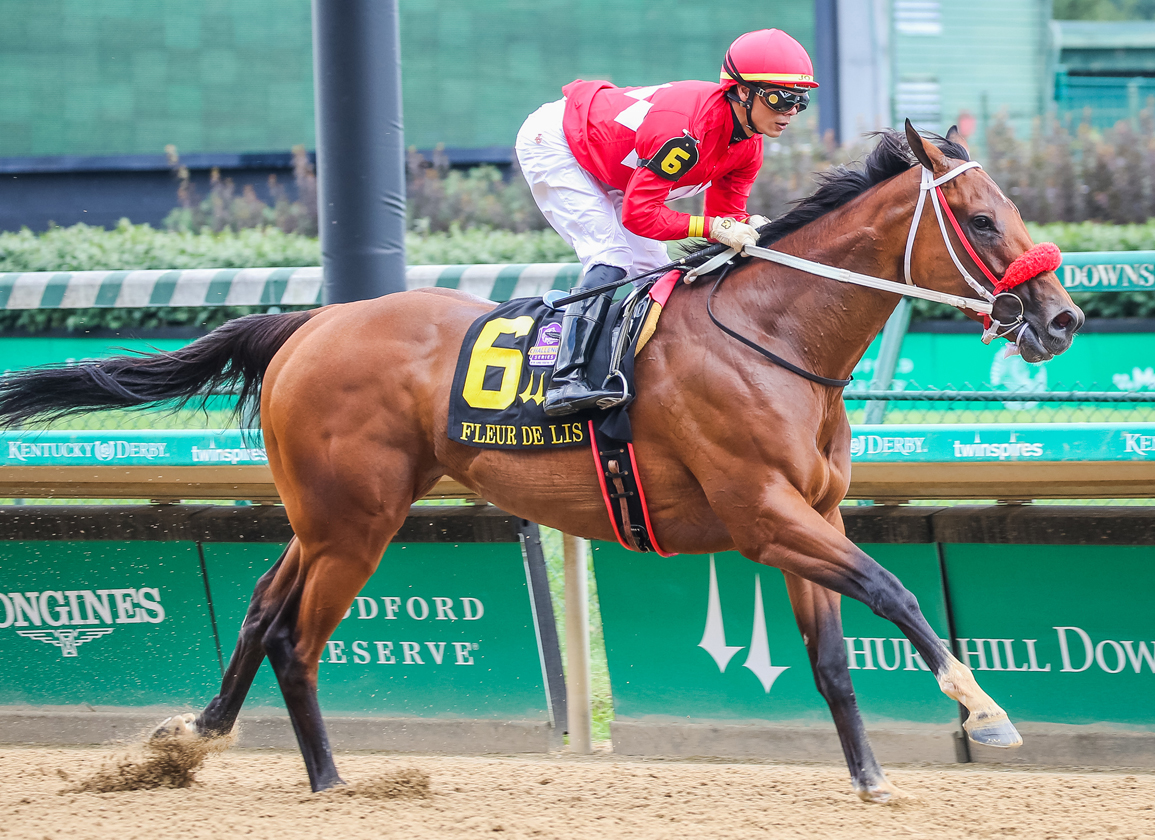 Over the past three years, Gutierrez has learned how to best handle Letruska's big personality and knows when she might need a bit of extra time and space.

“I like to work with her a lot in the previews for the races so she knows the place,” he explained. “She will go to the paddock and school maybe three, four or five times because sometimes she starts to be nervous or active. But now she's five years old and has run at seven different tracks, so she's not like she was when she was two.”

Even so, Gutierrez said his star pupil is starting to get antsy for her next start.

That next race will probably be a return to Saratoga for the GI Personal Ensign S. on Aug. 28, according to Gutierrez. But the conditioner says this summer, they will be taking a more reserved approach with the mare while keeping their eye on the final target for the season.

“The Breeders' Cup is the goal,” he said. “But you start to dream about what is possible next. I have the idea that if everything goes well she could go to Saudi Arabia or why not Dubai? I think that would be the perfect point to run with the boys internationally, so why not?”

Letruska has taken Gutierrez a long way from their home track in Mexico City where she made her debut back in 2018. Before this star mare came along, the trainer had seen some success in the U.S., but nothing compared to the ride Letruska has taken him on.

“She's a horse that changes everything because when you come to a new country and have this kind of horse, you can open some doors and win important races,” he said. “Before the start of the pandemic, I never imagined winning six graded races with her. It's like a movie because she's running in the races I used to watch on TV and now I'm in the middle of it.”