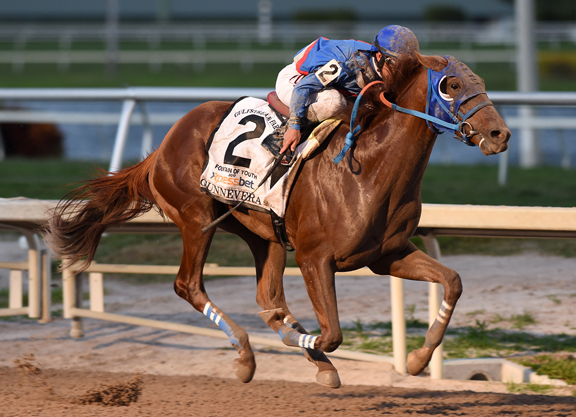 Multiple graded stakes winner Gunnevera (Dialed In-Unbridled Rage, by Unbridled) will stand at Pleasant Acres Stallions near Morriston, Fla., for the 2021 breeding season. The Salomon Del Valle colorbearer goes to the breeding shed with a record of 21-6-5-3 and earnings of $5,561,800. It was announced earlier this month that he had been retired from racing.

“Helen and I, and the entire team at Pleasant Acres Stallions, are thrilled to have Gunnevera begin his stallion career at our farm,” said Joe Barbazon, owner of Pleasant Acres and syndicate manager. “He has had a very exciting career–earning more than $5.5 million–while beating multiple Grade I horses like Always Dreaming (Bodemeister), West Coast (Flatter), Practical Joke (Into Mischief), and Classic Empire (Pioneerof the Nile) on the track.”

Winner of the 2017 GII XpressBet Fountain of Youth S. as well as the 2016 GII Saratoga Special S. and GIII Delta Downs Jackpot S., Gunnevera was perhaps better known for the races he didn't win over a career that spanned four seasons. In 2018, he was second to eventual champion Accelerate (Lookin At Lucky) in the GI Breeders' Cup Classic after finishing in the runner-up spot to Yoshida (Jpn) (Heart's Cry {Jpn}) in the GI Woodward S. The year prior, the Antonio Sano trainee was also second to eventual champion West Coast in the GI Travers S. In addition to being runner-up in some of the country's biggest races, he also placed in the 2019 G1 Dubai World Cup in what would be his final start. Overall, he won or placed in 11 black-type events, 10 of which were graded.

Plagued by foot problems throughout his career, Gunnevera had overcome the loss of his dam and was a bottle-fed orphan from the time he was 10 days old. He goes to stud as the highest earner to ever stand in Florida.