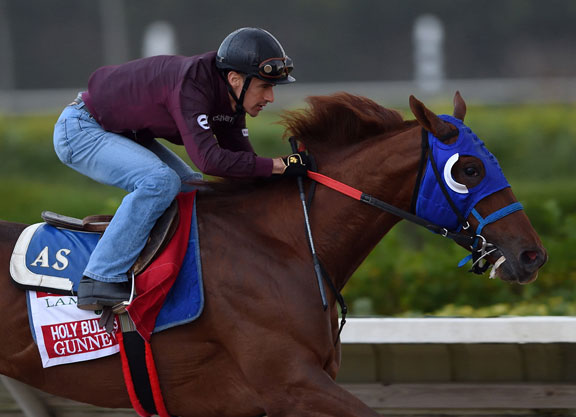 Salomon Del Valle's Gunnevera (Dialed In–Unbridled Rage, by Unbridled), a winner of a trio of graded stakes and runner up in a quartet of Grade I/Group 1's through a career that spanned four seasons, has been retired from racing. Stud plans have yet to be determined.

Victorious three starts at two, including the GII Saratoga Special S. and the GIII Delta Jackpot, the Antonio Sano trainee took the next season's GII Xpressbet Fountain of Youth S. before finishing third in the GI Florida Derby. Later that summer, he won Gulfstream's Tangelo S. ahead of a runner-up effort behind West Coast (Flatter) in the GI Travers S. During his 4-year-old season, he was third in the GI Pegasus World Cup Invitational before collecting a win in a Gulfstream optional claimer later that summer. Runner up in the GI Woodward, he filled the same position behind Accelerate (Lookin At Lucky) in the 2018 GI Breeders' Cup Classic. Third in his second attempt at the Pegasus World Cup, he made what would be his final start in the 2019 G1 Dubai World Cup, finishing third behind Thunder Snow (Ire) (Helmet).

The 6-year-old, who has faced foot issues, throughout much of his career–including a fracture last summer–retires with six wins from 21 starts and earnings of $5,561,800.