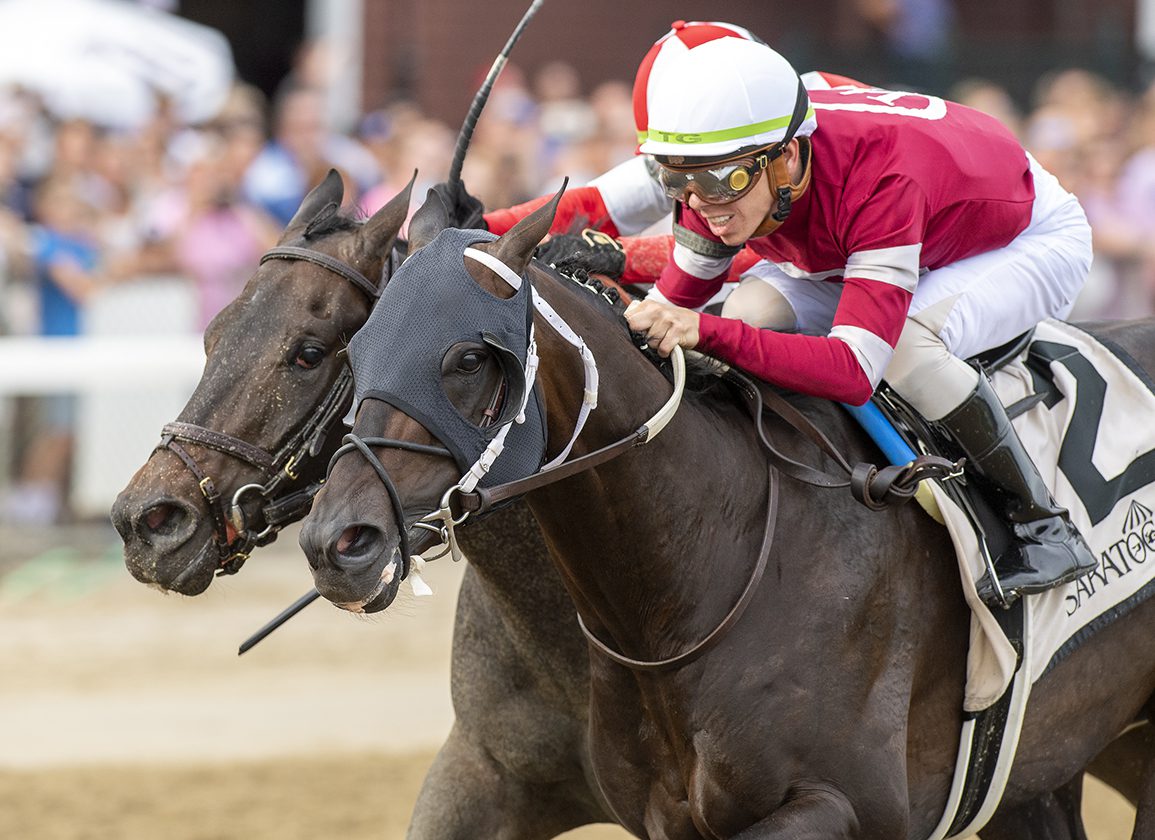 Gunite (inside) holds on | Sarah Andrew

While all eyes were on returning champion Corniche (Quality Road) who faded to last, Gunite (Gun Runner) completed a big weekend at Saratoga for Winchell Thoroughbreds and trainer Steve Asmussen with a gritty victory in the GII Amsterdam S. in upstate New York Sunday. Sent off at 7-1, last year's GI Hopeful S. winner battled Pinehurst (Twirling Candy) through fractions of :21.78 and :44.60, while Corniche sat in stalking position behind the dueling leaders. As the champ backed up on the turn, Gunite strode to the lead into the lane before bravely holding off Accretive (Practical Joke) to win by a neck while completing the 6 1/2 furlongs in 1:15.75.

“It's just nice to come back to where he won his Grade I last year and have another win in a Grade II,” said owner Ron Winchell. “He was training great. He was training like he wanted to go on from his 2-year-old year and do exactly what he did. Sometimes, you never know if they move on and continue to win graded stakes, but he got it done today.”

Of Corniche, jockey Luis Saez said, “He broke good and was in a good position. He was right there. He probably needed the race.”

Winchell Thoroughbreds was in the Saratoga winner's circle Saturday with GII Jim Dandy S. winner Epicenter (Not This Time), while Asmussen made the trip with both Epicenter and GI Alfred G. Vanderbilt H. winner Jackie's Warrior (Maclean's Music).

“We've been blessed with some extremely nice horses and they make it all possible,” Asmussen said of his Spa weekend.

Gunite, who captured his maiden at Churchill Downs last June, finished second in the Aug. 14 GII Saratoga Special before romping home by 5 3/4 lengths in the Sept. 6 GI Hopeful S. He went to the sidelines following a fifth-place effort in the Oct. 2 GI Champagne S., but showed he had improved with the time off when he returned to action with a runner-up effort in a Churchill optional claimer June 3. He prepped for this return to graded action with another gritty victory in the July 3 Maxfield S. in Louisville last time out.

“In his last race, he wasn't away cleanly and it put him in a different position,” Asmussen said. “I thought that was a similar race to the horse we ran here last year, just handy and in a good spot, tenacious to the wire. Extremely good win and obviously we're on to the [Aug. 27 GI] Allen Jerkens from here.”

Gunite was one of three first-crop juveniles by Gun Runner to win graded stakes at Saratoga last summer and is one of the Three Chimneys sire's five Grade I winners to date. The stallion was represened last weekend by GI Haskell S. winner Cyberknife and runner-up Taiba.

Gunite is the first foal out of Winchell homebred and stakes winner Simple Surprise, who has an unraced 2-year-old full-sister to Gunite named Surprise Attack who sold for $400,000 at last year's Keeneland September sale. The mare also has a yearling filly by Copper Bullet and a weanling filly by Tapiture. She was bred back to Gun Runner this year.