Gun Runner Settling in at Gulfstream 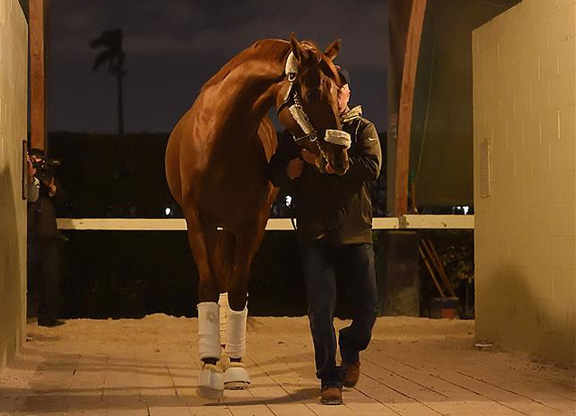 Taking to the track at approximately 5:50 a.m., more than an hour before sunrise, Gun Runner “just had an easy day, going straight off a mile,” assistant trainer Scott Blasi said.

Gun Runner, a winner of four straight Grade I events, including the Breeders' Cup Classic, shipped into Gulfstream Thursday evening from New Orleans.

“He's in such good condition right now, and he's so fit, when you get him off that van, off an airplane, he knows where he's at and what he's getting ready to do,” Blasi said. “He's just such a champion. He takes everything in stride. Never had a problem shipping, I think this is his 12th or 13th different racetrack he's run at. It's kind of old news to him. It's probably more stressful on us than him. We expect him to settle in and train, get a little work over the racetrack, and school in the paddock a time or two.”

In his final major breeze for the Pegasus World Cup, GII San Antonio S. winner Giant Expectations (Frost Giant) went five furlongs on Santa Anita's fast main track at 7:45 a.m. Friday morning in a bullet :58 flat under exercise rider Pepi Aragon. It was the fastest of 53 drills at the distance. “He went well,” said trainer Peter Eurton. “I couldn't be happier. We'll know more as he goes along. We're taking it one day at a time.”