Gun Runner Puts on a Show in Woodward 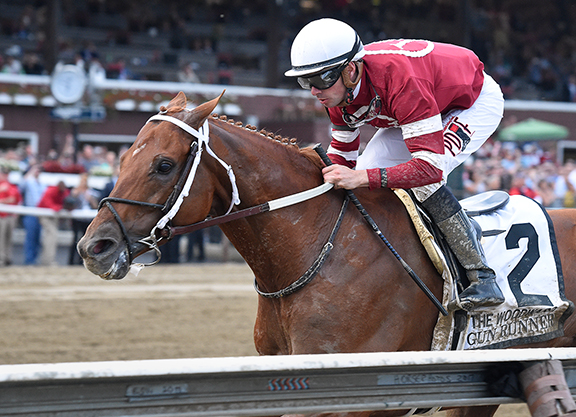 The ultra-consistent Gun Runner (Candy Ride {Arg}) became the first horse since Lawyer Ron in 2007 to complete the GI Whitney S./GI Woodward S. double with yet another dazzling performance at Saratoga in Saturday's Woodward. Hammered down to 1-5 favoritism in this five-horse affair, the chestnut was content to stalk from second as G1 Dubai World Cup third-place finisher Neolithic (Harlan's Holiday) clicked off opening fractions of :23.20, :46.56 and 1:10.45. Sweeping past that rival to take control entering the far turn, Gun Runner instantly surged clear of the field and sailed home to a spectacular 10 1/4-length success. Rally Cry (Uncle Mo), winner of the Alydar S. here last out, overtook stablemate Neolithic late to be second.

“This was our last race heading into the [GI] Breeders' Cup [Classic] and I thought it went as well as we could have hoped,” trainer Steve Asmussen said. “If we can get out to California in good shape we'll hope to finish off the year. He increased his margin to the wire and proved his worth. The game plan was to leave him in Florent's hands. We worked him off many a horse in the mornings, knowing that he's very comfortable in that position, but with Todd having two talented horses in there, you did expect him to send one. It was expected and Gun Runner handled it like he's supposed to, and with his experience at this level proved dominant.”

“That was better than the Whitney,” Florent Geroux said. “Stronger. Faster. Overall, he is just getting better and that was four weeks and he is doing good on the track. And I don't think he is 100% cranked up yet. I really do think he has another step forward with him.”

Geroux added, “He did [swap leads] on his right lead. He always swaps onto his right lead, but sometimes, when he gets distracted, he sweeps back onto his left. HE does not really get tired. He just has so much energy, he is looking at everything, and the little things just turn it on and he switches back and forth, not because of tiredness but because he is just playful and feels good.”

Capturing both the GII Risen Star S. and GII Louisiana Derby last term, Gun Runner finished third to Nyquist (Uncle Mo) and Exaggerator (Curlin) in that term's GI Kentucky Derby and returned to winning ways next out with a decisive score in Churchill's GIII Matt Winn S. Off the board for just the second time in his career when fifth to Exaggerator in a sloppy renewal of the GI Haskell Invitational S., the chestnut was third behind a record-setting performance from champion Arrogate (Unbridled's Song) in the GI Travers S. at Saratoga last summer. Missing by just a half-length when second to subsequent GI Cigar Mile hero Connect (Curlin) in the GII Pennsylvania Derby last September, the Asmussen pupil was run down late by Tamarkuz (Speightstown) to be second again in the GI Breeders' Cup Dirt Mile.

Closing out his 3-year-old campaign with his first top-level score in the GI Clark H. at Churchill Downs Nov. 25, Gun Runner was forced to miss the inaugural $12 million GI Pegasus World Cup Invitational due to an EHV quarantine at his Fair Grounds base, but romped by 5 3/4 lengths in Oaklawn's GIII Razorback H. Feb. 20. A game second behind an unbelievable performance from Arrogate after setting the pace in the G1 Dubai World Cup Mar. 25, Gun Runner sailed home to an effortless seven-length victory in his stateside return beneath the Twin Spires in the GI Stephen Foster H. June 17 and won the Whitney with similar ease last time Aug. 5.

Gun Runner is the first foal out of the 10-year-old mare, whose now 2-year-old filly by Tapit summoned $1.4-million from Mandy Pope at last term's Keeneland September sale. Quiet Giant produced another Tapit filly in 2016 and foaled a full-brother to Gun Runner May 17 of this year.