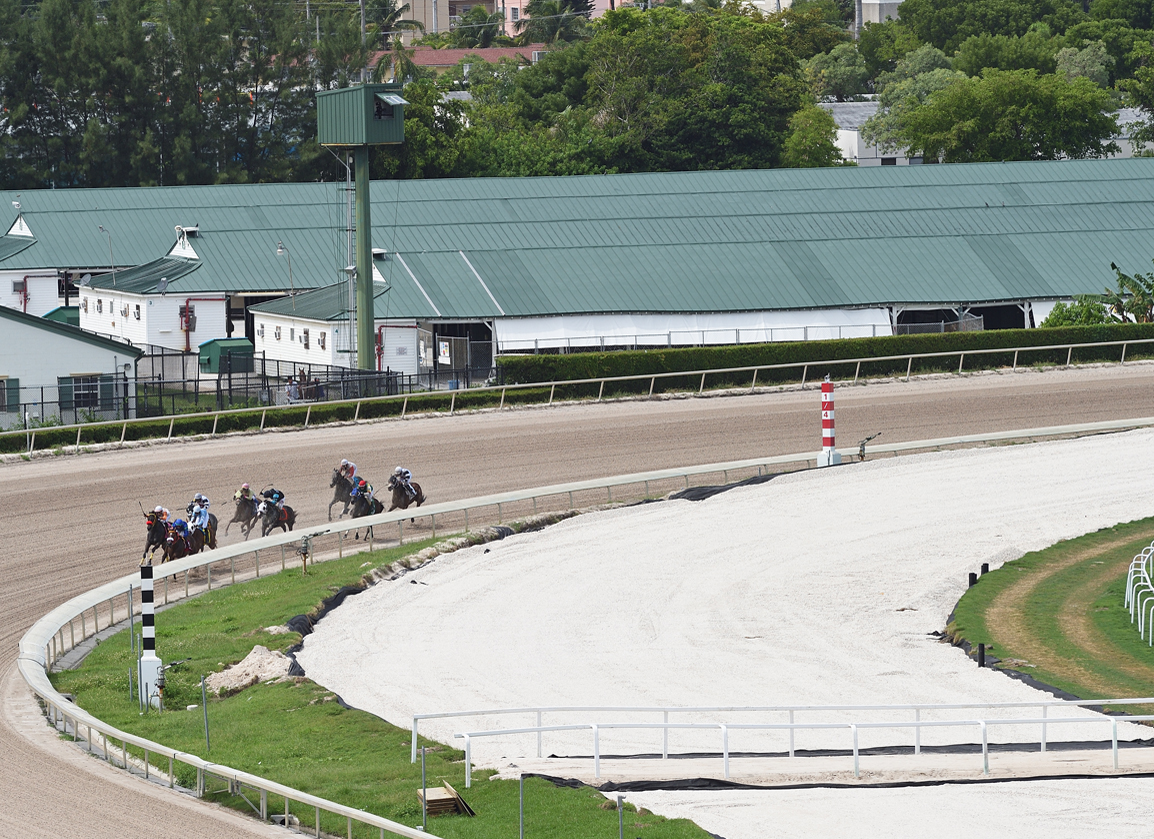 A new era at Gulfstream Park is set to begin Sept. 23 when the track will hold its first ever races on a Tapeta synthetic surface. Including two substitute races, there are three races in the condition book scheduled for that day on Tapeta along with three grass races that will instead be run on the synthetic surface.

The Gulfstream grass course will be given a break after the card of Sept. 19 and will not be used again until the Championship meet begins. Once that happens, Gulfstream will be the first track in the world to use three distinct surfaces–dirt, grass and a synthetic track. The Tapeta surface was built over what used to be the outer portion of the turf course.

Training has yet to begin on the Tapeta surface as Gulfstream is awaiting the arrival of a new rail that is set to be shipped in from Great Britain. According to Bill Badgett, the executive director of Florida racing operations for the Stronach Group, the new track should be open for training on Sept. 21.

Having a Tapeta surface means that Gulfstream will no longer have to move races to the dirt when inclement weather makes it is impossible to use the turf course. Whenever that happens, there are usually a number of scratches with the end result being a race with a small field that does not attract a lot of handle. Moving a race from the turf to Tapeta ordinarily does not result in a lot of scratches.

“When you start putting all the positives together, it was a plus, plus, plus for everybody,” Badgett said of the decision to install a Tapeta track. “Last year we had 100-something races taken off the turf. Obviously, when you go from having a 12-horse field scratched down to four horses it depletes the handle immensely. We are always working to try to raise purses and it hinders that when your field size falls to pieces.”

“For the last six years we have gone to Gulfstream Park West and October and November was the time we used to renovate the turf course,” Badgett said. “We run on it 10 months out of the year and somewhere along the line it needs a break. If we didn't have Tapeta and if we tried to run on the turf this time of year we would have to use the turf course very sparingly.”

Badgett also raised the possibility that some dirt races could be moved to the synthetic track.

“If there is a monsoon or a torrential downpour, that's another reason why putting in the Tapeta track is a plus,” he said. “Especially down here, you can get hurricanes and severe weather at any given time. Moving races from the dirt to the Tapeta is something to definitely think about.”

Once turf racing returns, the Tapeta track will take on a new role. While races will be regularly carded on the surface, they, for the most part, will be for cheaper horses. The plan will be to reserve the turf course for stakes, allowances and for other higher level races.

“We will be saving the turf course for the better horses,” Badgett said.

But Badgett said that a time may come when Gulfstream will look to card top-level races and, possibly stakes races, on the Tapeta surface.

“Down the road, having a stakes on Tapeta is a possibility,” he said. “It is a learning experience for everybody right now and we're kind of waiting to see what happens. Once the horses get their sea legs underneath them so far as running on it and who likes it and who doesn't we'll have a better idea of what we will be doing. We're going to start out having some starter series on it and will build up from there.”

Though racing on Tapeta will be a new wrinkle for Florida horsemen, Badgett said he has gotten nothing but positive feedback from that group.

“We just had a meeting with horsemen and they are all are extremely upbeat,” he said. “Everybody is looking forward to it. The meeting went really well and there was no negativity whatsoever.”