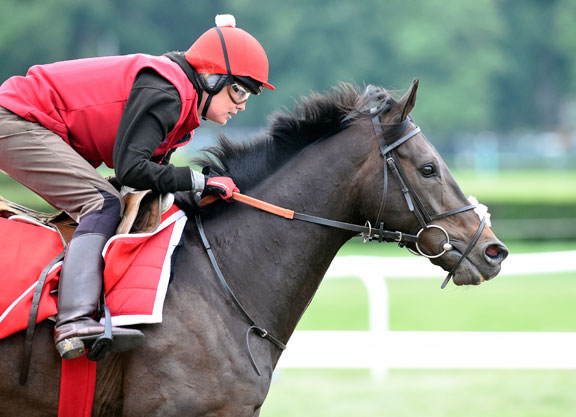 NEWMARKET, UK—This week would normally be one of Newmarket's finest. Top-class racing, the Tattersalls July Sale, stallion parades and parties.

As Britain reawakes from lockdown, the business end of the bloodstock world has managed to operate almost normally and racing has been back in action since early June behind closed doors, meaning that we have a July Week of sorts, albeit one without all the fun.

It's been a long haul for the majority of the breeze-up consignors who left Ireland almost three weeks ago and have been on the move between sales in Newmarket and Doncaster since then. Generally, the breeze-up market has held up better than most dared to dream, and, naturally, the hope is for that trend will continue on Wednesday when trade gets underway for the single session at Park Paddocks.

After withdrawals, around 120 2-year-olds will be offered including a full-sister to the G2 Lancashire Oaks winner Lady Tiana (GB) and listed-winning stayer Blakeney Point (GB), both of whom are by Sir Percy (GB). The filly is offered as lot 25 through Tally-Ho Stud and is fairly typical of the profile of horse usually found in the Guineas Sale, which tends to include a later-maturing type. Indeed, the sale's most famous graduate is the Gold Cup winner Trip To Paris (Ire) (Champs Elysees {GB}), who was sold by Mocklershill to Federico Barberini for 20,000gns back in 2013. A durable and talented individual who raced until the age of six, earning more than £800,000 during his career, he was however out and winning as early as July of his juvenile season.

On Thursday and Friday the action switches to the mixed fare of the July Sale and it was from here that Golden Horde's dam Entreat (GB) was sold by Cheveley Park Stud four years ago for just 14,000gns. The dams of fellow Group 1 winners Fairyland (Ire), Ten Sovereigns (Ire) and Watch Me (Fr) have also been sourced from this sale in recent years and breeders are likely to make a beeline for sizeable drafts from Cheveley Park Stud, Godolphin and Juddmonte among others.

Barton Stud consigns the French mare Damdam Freeze (Fr) (Indian Rocket {GB}), who has already produced the stakes winner Kendam (Fr) and Kenfreeze (Fr), both by Kendargent (Fr), and the family has received a further boost this season via Kendam's son Kenway (Fr) (Galiway {GB}), the winner of the G3 Prix Eclipse. The 15-year-old Damdam Freeze is in foal to Showcasing on a June 3 cover and is offered as lot 373.

The dam of one of the toughest horses currently in training, Prince Of Arran (GB) (Shirocco {Ger}), is also included in Thursday's session and she is the 14-year-old Storming Sioux (GB), a daughter of Storming Home (GB). Selling through Jamie Railton as lot 229, she is carrying a foal by Elwick Stud's Mondialiste (Ire) and was last covered on May 18.

Wednesday's session for the Guineas Sale begins at 12 noon and for Thursday and Friday the July Sale will start at 10am. Live internet bidding is available via the Tattersalls website and prospective buyers are asked to register for this service in advance of the sale.