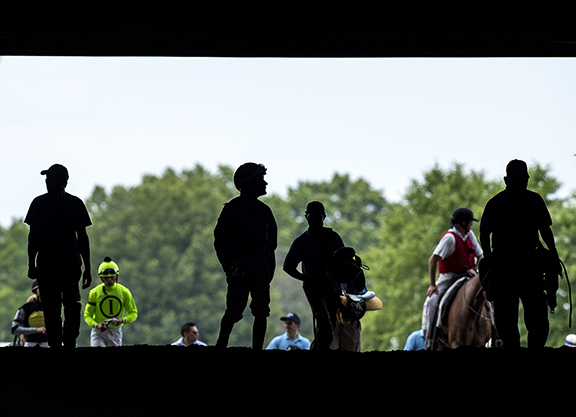 An attempt by The Jockeys' Guild to get the New Jersey Racing Commission (NJRC) to hold off on implementing the most restrictive anti-whipping rules in the nation until an appeal gets decided in court failed Wednesday when the NJRC voted that the Guild couldn't show that not imposing a stay would create irreparable harm or hardship to riders, horses and the public.

So when the Monmouth Park meet opens May 28, whipping a Thoroughbred will not be allowed by any New Jersey jockey or exercise rider except for the express purpose of ensuring the immediate safety of the horse or rider.

Back on Sep. 16, the NJRC voted 4-0 to implement three new rules that made the state the first in the nation to ban whipping beyond protection in an emergency situation. It was decided at the time to hold off implementing them until the start of the 2021 season.

If a jockey or exercise rider uses the riding crop in a manner contrary to the new rules, he or she will be subject to a fine, suspension, or forfeiture of the jockey's share of the purse “if, in the opinion of the stewards, the unauthorized use of the whip caused the horse to achieve a better placing.”

On Nov. 5, the Guild filed a notice of appeal in Superior Court of New Jersey, Appellate Division, based on the position that the Guild's comments and concerns were not considered during the rulemaking process. The Guild also claimed that the NJRC rushed through adopting rules that are unsafe for the horses and jockeys while creating a “dangerous precedent” that is inconsistent with any other jurisdiction in America.

“This is, indisputably, the harshest restriction in the nation. It's more restrictive than the racing crop rules in neighboring states,” said Nancy Del Pizzo, a New Jersey-based attorney representing the Guild, during the Mar. 24 NJRC teleconference meeting. “This rule is like no other rule in the nation regarding abuse of the crop.”

Del Pizzo said that implementation of the new rules could trigger a “domino effect” of economic harm based on jockeys and horse owners not wanting to race at Monmouth. She claimed that Monmouth might not even be able to fill 12-horse races because so few jockeys will be based in New Jersey this year, and that the adverse financial effects that stem from not being able to whip horses will trickle down to farms and agricultural businesses. She expressed a belief that racing might even have to shut down over the new whip rules.

Del Pizzo said that in terms being able to differentiate between a jockey's use of the whip for safety (which is allowed) or for encouraging a horse to run faster (which is not), “there's just no way the stewards will be able to comprehend these instances.”

Del Pizzo contended the NJRC voted in the new rules contrary to a state law on quorums because only four members are seated on the commission instead of the required nine. She also said that since the rules are not yet in effect, maintaining the status quo makes sense while the court appeal is pending.

Del Pizzo additionally expressed dismay that the NJRC did not allow jockeys to address the commission on this issue during Wednesday's meeting.

Steven Gleeson, a deputy attorney general who advises the NJRC, said that “The request for a stay simply hasn't shown any irreparable harm that would come about [by] having the new rules go forward this spring when racing reopens. Basically, what they've been arguing is that this rule is different from other jurisdictions. Well that's not irreparable harm.”

As for the jockeys' concerns about safety, Gleeson said, “The rules themselves directly address safety. They permit the use of riding crops when necessary for the safety of the rider or the horse.”

Gleeson also said that the Guild and riders did indeed participate in the public commentary process, and that some of their concerns did, in fact, make it into the final versions of the rules.

Gleeson said the Guild's court appeal has no likelihood of success on legal merits, and that the quorum issue is moot because common-law rule states that a majority of however many members are seated on the board is what constitutes a quorum.

Just prior to the vote, NJRC chairperson Pamela Clyne argued that the commission couldn't just roll back the rules to those that were in place previously.

Commissioner Glen Vetrano said he was disturbed to learn via the Guild's attorney that jockeys who had wanted to testify during the meeting were told they couldn't.

Judith Nason, the NJRC's executive director, replied that the jockeys had been excluded on the advice of the NJRC's counsel based on the determination that the Guild's attorney would be representing them at the meeting.

“We're not tying the hands of jockeys,” Vetrano said, emphasizing that safety usage is still permitted. “And I hope that [stewards] allow them to use that riding crop [for safety] when need be.”

Clyne made a motion for the NJRC to reject the request of the stay. She voted yes, to keep the rules in place, as did Vetrano and commissioner Francis Keegan, Jr.

When Nason asked commissioner Michael Arnone for his vote, he replied, “I don't understand the vote here. To deny it is a no vote?”

No one corrected Arnone or made any clarification that a yes vote was required to deny the stay. It was unclear how his vote was counted; Nason only said, “The motion carries.”

TDN asked Del Pizzo via email after the meeting to comment on the decision. She replied that the Jockeys' Guild “is unable to respond while involved in litigation.”