Gufo Gets It Done in Sword Dancer 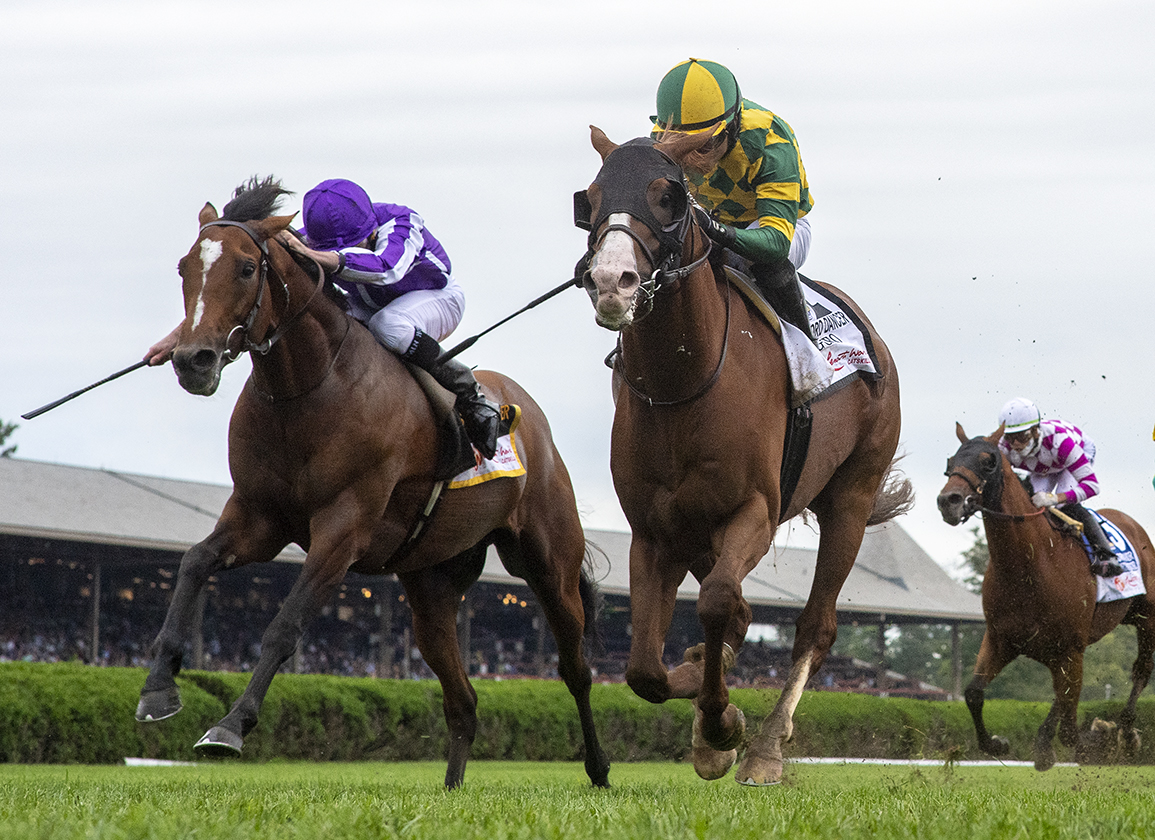 Otter Bend Stables LLC's super consistent Gufo (Declaration of War) held off a furious late bid from European invader Japan (GB) (Galileo {Ire}) to score the second highest-level win of his career in Saturday's GI Sword Dancer S. at Saratoga–a “Win and You're In” qualifier for the GI Breeders' Cup Turf. Last seen annexing the Grand Couturier S. over this trip downstate July 5, the 5-2 shot was content to sit at the back early along the rail. He crept closer as they approached the final turn after a mile in 1:39.16, and split horses outside of Japan to get the jump on that one entering the stretch. He kept Japan pinned in in upper stretch, struck the front with a furlong to run and kept on from there to get the job done. Saratoga-loving GII Bowling Green S. winner Cross Border (English Channel) was a distant third. The winner stopped the clock in 2:28.30.

“I had a very good trip,” said winning rider Joel Rosario. “It looked like they went nice and firm. It was a nice pace and on the backside, I was just moving nicely with my horse and decided to be where I was. He ran a really good race today and turning for home, it was just a really good performance.”

Gufo capped a four-race win streak in last July's GIII Kent S. at Delaware before missing by a head to future triple Grade I winner Domestic Spending (GB) (Kingman {GB}) in this venue's Saratoga Derby Invitational last August. He took the GI Belmont Derby downstate in October, but was third by a neck to Domestic Spending in Del Mar's GI Hollywood Derby Nov. 28. A nose second in Belmont's GI Man o' War S. May 8, he was third behind Domestic Spending again in the June 5 GI Manhattan S. before getting a confidence builder at short odds in the Grand Couturier.

The Christophe Clement barn was coming off a productive Friday in which its representatives took a pair of stakes on the New York-bred Showcase Day.

“I am delighted with this horse and the way he ran today,” Clement asaid. “He is a top-class horse. He's always been a top-class horse. A mile-and-a-quarter, a mile-and-a-half, it really doesn't matter for him. I am delighted to win this race. The race set up perfect. There was plenty of pace. The stable has been lucky [winning] that way this year. This is fun, and it's the kind of race we like to win.”

The GI Joe Hirsch Turf Classic at Belmont Oct. 9 as a stepping stone for the Nov. 6 Breeders' Cup Turf would be a logical path, but Clement said of future plans: “Let's try to wait to decide on that for another moment. We'll enjoy this, and go from there.”

Pedigree Notes:
Gufo is one of seven Grade I/Group 1 winners for Declaration of War, who now stands at Japan's Shizunai Stallion Station. Clement trains another of that son of War Front's most accomplished runners in 2019 GI Summer S. hero Decorated Invader.

Gufo is one of two Grade I winners out of Petionville mares, along with near $3.5-million earner McKinzie (Street Sense). Dam Floy was fourth in her only start, an April 2-year-old race at Keeneland on the Polytrack. She RNA'd for just $1500 at the 2011 Fasig-Tipton Kentucky Winter Mixed Sale just months before her first foal Hogy would kick off a productive 55-race career. The three-time Grade I winner passed away earlier this month at Old Friends. Floy produced a Preservationist filly Apr. 28 and was bred to Hard Spun for 2022.