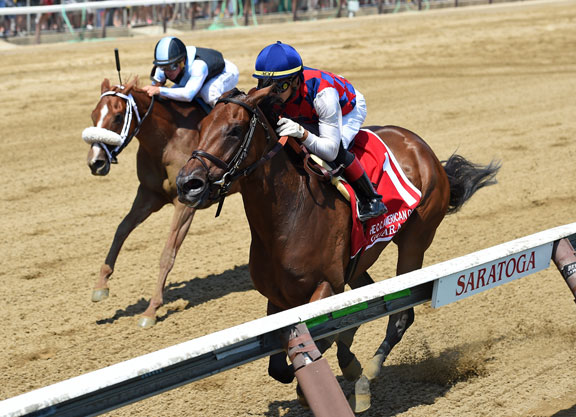 Three Chimneys Farm’s undefeated ‘TDN Rising Star’ Guarana (Ghostzapper) will try to put a stranglehold on the 3-year-old filly championship hunt as the favorite in a layered 11-horse renewal of the GI Cotillion S. Saturday at Parx.

Debuting as a 4-5 favorite Apr. 19 at Keeneland, the homebred ran to the money and then some, cruising home a 14 3/4-length victress, easily good enough for ‘Rising Star’ honors. She backed that up with a devastating six-length triumph in the GI Acorn S. June 8 at Belmont. Stretched out to two turns for the first time in the GI Coaching Club American Oaks July 21 at Saratoga, the bay was much less brilliant, but still triumphant, holding off subsequent GI Alabama S. runner-up Point of Honor (Curlin) by a length after setting a slow pace.

Joel Politi’s Serengeti Empress (Alternation) could launch herself right back into the title race with a victory. Last year’s 19 1/2-length GII Pocahontas S. scorer annexed the GII Rachel Alexandra S. to open her sophomore account and, after a disastrous run in the GII Fair Grounds Oaks, went all the way in a 13-1 upset of the GI Kentucky Oaks. The dark bay was no match for Guarana when second in the Acorn, but she would’ve had to be a super-horse to prevail that day after setting blistering fractions of :21.89, :43.99 and 1:08.03. She again set a fast pace in the GI Longines Test S. Aug. 3 at Saratoga before coming up a half-length short while earning a career-best 98 Beyer for the runner-up finish.

A pair of 2018 star juveniles look to regain their top form in DJ Stable’s Jaywalk (Cross Traffic) and Kaleem Shah’s Bellafina (Quality Road). Jaywalk, named last year’s 2-year-old filly champion for victories in the GI Tito’s Handmade Vodka Breeders’ Cup Juvenile Fillies and GI Frizette S., has scored just once in five tries as a 3-year-old when left alone on the lead in the GIII Delaware Oaks two back. That scenario is unlikely to transpire in this speed-laden group, and the gray comes in off a loss at 1-5 when second behind re-opposing Horologist (Gemologist) in the GIII Monmouth Oaks Aug. 17. Bellafina, a three-time Grade I winner, finished a no-excuse fifth in the Kentucky Oaks and was well beaten when third in the Test last out. Adding blinkers for this test, the $800,000 Fasig-Tipton Gulfstream buy comes in off a five-furlong bullet in :59 3/5 (1/54) Sept. 15 at Santa Anita.