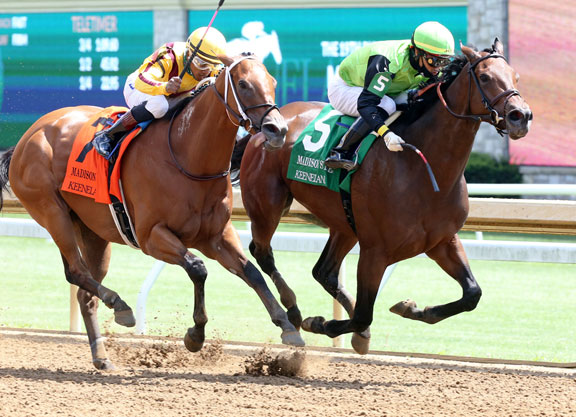 Keeneland’s GI Madison S. was a battle between ‘TDN Rising Stars’ Guarana (Ghostzapper) and Mia Mischief (Into Mischief) from start to finish, but in the end it was Guarana who won the gutsy brawl. Favored at 1-2, Guarana went straight to the front and was hounded by Mia Mischief, who was let go at a surprising at 8-1, through early splits of :22.95 and :45.92. Mia Mischief drew even with Guarana at the top of the stretch and briefly headed her younger rival, but Guarana battled back in the final sixteenth, turning back her elder for a half-length success. It was the 100th Grade I victory for Eclipse winning-conditioner Chad Brown.

“Well during the course of the race, what happened was it unfolded sort of how I feared with Mia Mischief having the better post on the outside of us and being able to hound us a bit,” said Brown. “I thought turning for home that the post really did us in this race and I was started to get a little disappointed. But I could see at the sixteenth pole that she was finding her stride again and I think seven [furlongs] is maybe a tick far for the other filly. We were able to come back on her. She showed her heart. She showed that she’s a very special horse, which we’ve known for a long time.”

He continued, “To [get the 100th Grade I win] with one of Mr. Torrealba’s horses is really special. He’s a real fine man. Very loyal. It’s right up there near the top. It’s a whole body of work from 12 1/2 years now of training. It has to do with my team of co workers, owners, and horses both present and past. They all contributed to the 100 Grade Is. God willing if everything stays in tact, we’ll work on the next 100. But we’re going to enjoy this for now.”

Devastating the field by 14 3/4 lengths in her Keeneland unveiling last April, Guarana romped by sixth in Belmont’s GI Acorn S. last June and followed suit with a win in the nine-panel GI CCA Oaks six weeks later. Finishing second to Street Band (Istan) as the favorite in the GI Cotillion S. Sept. 21, she was subsequently shelved for the season and resurfaced at Churchill June 4 with a dominant optional claimer score in the slop June 4.

Guarana is one of 12 top-level scorers by Ghostzapper and one of 41 graded winners for the Adena stallion. She is bred on the same Ghostzapper/Distorted Humor cross as fellow Grade I winner Molly Morgan. Daughters of Distorted Humor are responsible for 45 graded stakes winners. Magical World, a daughter of GI Breeders’ Cup Distaff winner Pleasant home (Seeking the Gold), is also responsible for stakes winner and GSP ‘TDN Rising Star’ Magic Dance (More Than Ready). Her 2018 colt by Pioneerof the Nile brought $2.1 million from e Five Racing at Keeneland September. The 10-year-old mare did not have a foal in 2019, but had a Gun Runner colt Feb. 25 of this year. This is also the family of MGISWs Point of Entry (Dynaformer), Pine Island (Arch) and Tale of Ekati (Tale of the Cat).