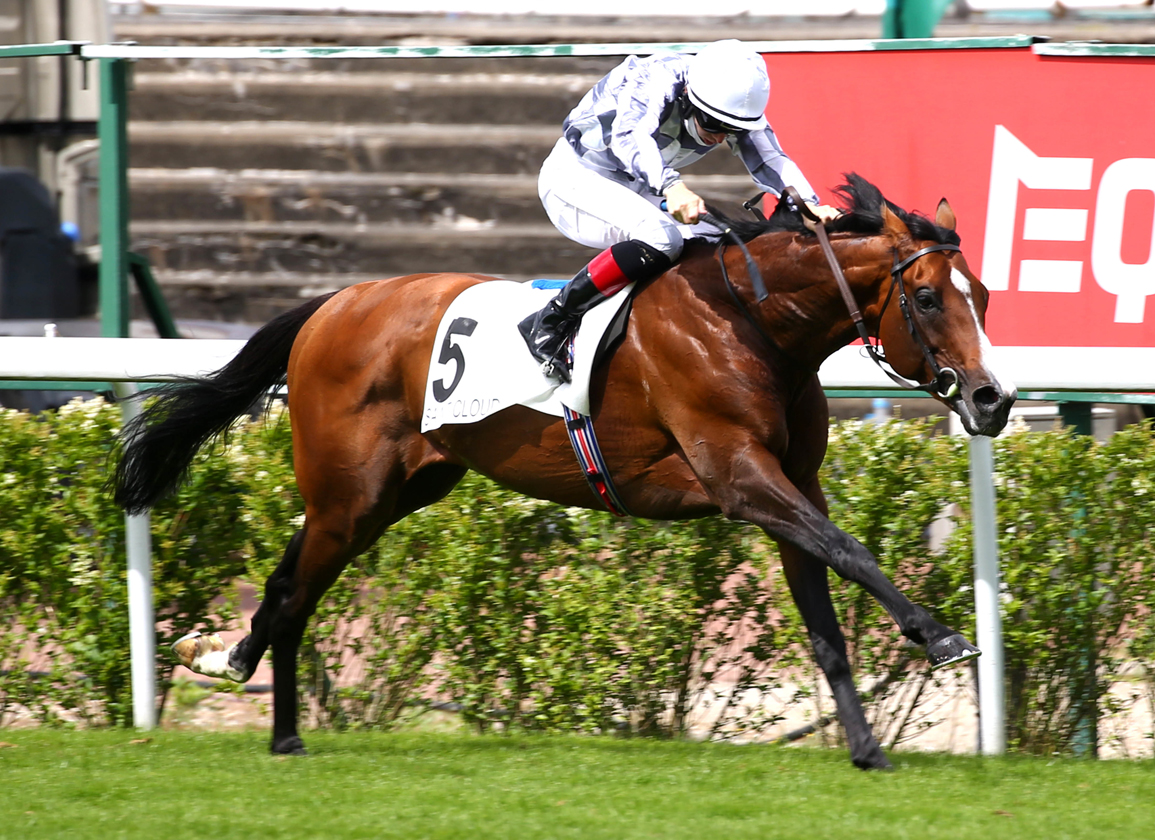 Coming closest in five attempts at group 1 success on his latest in the May 23 G1 Tattersalls Gold Cup, Ballydoyle's Broome (Ire) (Australia {GB}) finally made it count on Sunday leading with every step under Colin Keane in the G1 Grand Prix de Saint-Cloud. Sporting the silks of Masaaki Matsushima, the 5-year-old who had been second to Wonderful Tonight (Fr) (Le Havre {Ire}) in the June 19 G2 Hardwicke S. at Royal Ascot since that narrow Curragh reversal was unperturbed by being asked to take up front-running duties. Stretching his rivals from the top of the straight, the 39-10 shot was typically game as he held Ebaiyra (Distorted Humor) by a length, with Gold Trip (Fr) (Outstrip {GB}) a nose away in third. “Speaking to Aidan beforehand, he said to keep it pretty simple and if nothing was happy to go, to make my own way,” the winning rider commented. “He's a very uncomplicated horse, very genuine and stays well. He pricked his ears and was taking me the whole way and galloped right to the line. He deserved that, as he's been very consistent this year.”

It was in this country that Broome first tried this level when runner-up in the 2018 G1 Prix Jean-Luc Lagardere and after impressive wins in the G3 Ballysax S. and G3 Derrinstown Stud Derby Trial the following Spring was fourth and beaten only around half a length in the G1 Epsom Derby. Missing in action after finishing sixth in the G1 Irish Derby, the bay was out twice last term when fourth in the G1 Coronation Cup staged at Newmarket in June and when last of 13 in Ascot's two-mile G2 Qipco British Champions Long Distance Cup in October. Kept in training despite those disappointments, he took the Listed Devoy S. at Naas Mar. 28, the Apr. 17 G3 Alleged S. and May 3 G2 Mooresbridge S. at The Curragh before succumbing to Helvic Dream (Ire) (Power {GB}) in a photo in the Tattersalls Gold Cup and finding a real ace in his way in the Hardwicke.

This was due reward for Broome's efforts at a lower level this term and general level of consistency and also a breakthrough for Masaaki Matsushima, whose representative Yasufumi Sawada said, “This is Mr Matsushima's first group 1 win–I just spoke to him on the phone and he is very happy. He is such a brave horse, last year he had problems but he's been in very good form this season and the plan is to go for the [Oct. 3 G1] Prix de l'Arc de Triomphe [at ParisLongchamp] if Aidan is happy.”

Alain de Royer-Dupre is looking at sending the G3 Prix Allez France and G2 Prix Corrida-winning Ebaiyra back down in trip again. “She has run her race and it was very satisfactory, but she does have a tendency to do too much early in her races over a mile and a quarter and a mile and a half so I'd like to see her run in a truly-run mile-and-a-quarter race,” he said. “There are plenty of options, such as the [G1] Nassau [at Goodwood July 29] or the [G1 Prix Jean] Romanet [at Deauville Aug. 22].”

Broome's breakthrough success was coming two weeks on from the Listed Chesham S. win of his highly promising 2-year-old full-brother Point Lonsdale (Ire) and it is not a longshot that the dam's tally of group 1 winners will be increased by this time next year. The mare in question is the Listed National S.-winning Sweepstake (Ire) (Acclamation {GB}), who was also placed in the G3 Princess Margaret S. and GIII Appalachian S. and is a granddaughter of the Hesmonds Stud matriarch Galaxie Dust (Blushing Groom {Fr}).