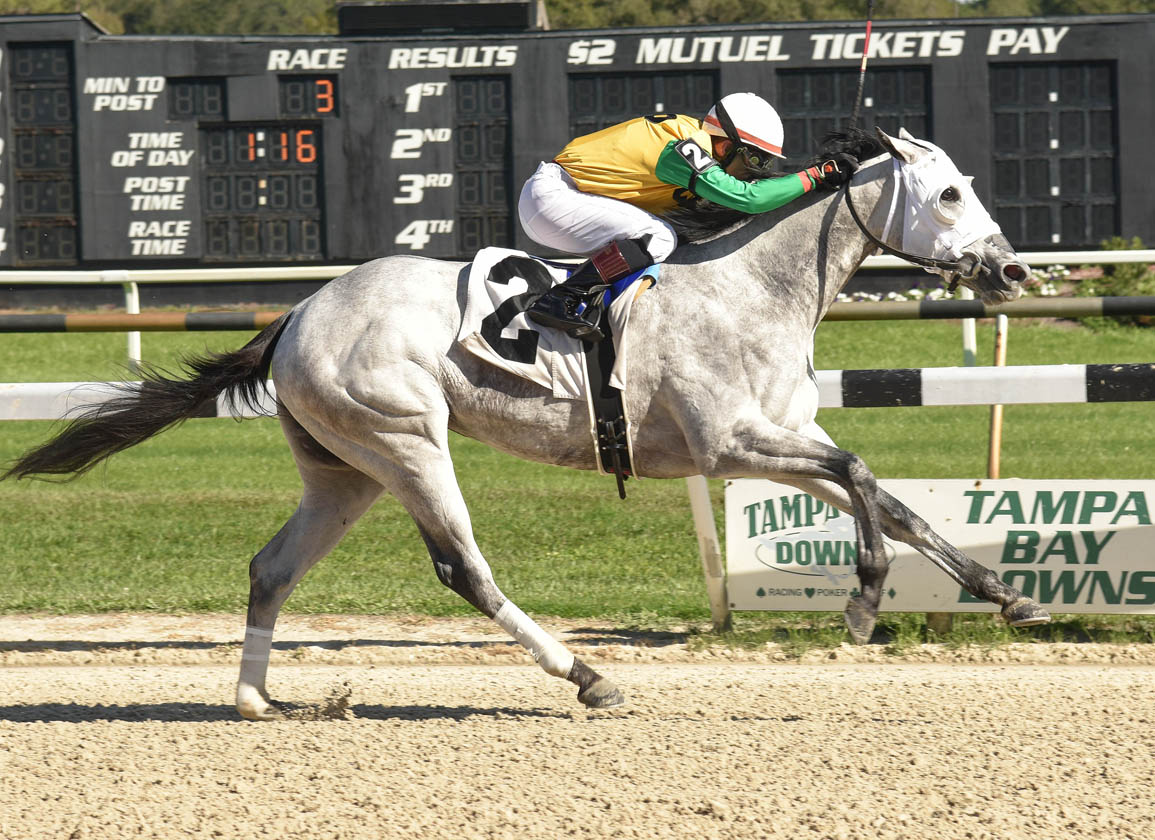 For the better part of two decades, Patricia Grimes and her husband Michael have bred and sold racehorses from their Classic Run Farm in Webster, Florida. Last spring, the couple decided to see what it felt like to race their own horses. They purchased a daughter of Frosted (hip 722) at the OBS April sale for $30,000 and named her Platinum Gem. The filly–just the second to carry the colors of Classic Run Farm–may have earned herself a start in stakes company after a pair of impressive victories at Tampa Bay Downs in December for trainer Maria Bowersock.

“We are surprised and in awe of what she is doing right now,” Patricia Grimes said. “She is incredible and Maria has her feeling great.”

Platinum Gem opened her career with a third-place finish at Delaware Park in October before a resounding 5 1/4-length maiden triumph at 11-1 (video) at Tampa Dec. 4. She came back to score a two-length allowance victory (video) at the Oldsmar oval Christmas Eve. The pair of victories have likely earned the filly a start in the Jan. 15 Gasparilla S.

“We hope to go on with her as long as she stays sound and healthy and her attitude is great,” Grimes said. “We want to go in a stakes with her, of course, and the Gasparilla is what Maria is thinking of.”

Grimes credited trainer Michael Stidham for picking Platinum Gem out of the OBS sale, although she was initially resistant to his choice.

“We weren't even at the sale that day,” Grimes explained. “We had gone the day before to look at some horses with him. The next day, he was still there and he picked her out. He called me and I told him, 'I really want a colt.' He called twice more. And the third time–meanwhile I had talked to my husband, Michael about it–and finally I said, 'Okay. Bid on her.' And we got her.”

A racetrack veteran, Grimes and her husband slowly worked their way into breeding industry, buying mares just off the track. Gion (Meadow Monster) was a stalwart of the band. The now-retired mare produced stakes winner Luke of York (Put It Back).

“When Gion had her last foal, we decided to keep him,” Grimes recalled. “His name was Miami Smuggler. We gave him to Maria and that was our first horse that we ever raced. He did quite well for us. Between Tampa and Presque Isle, he earned $80,000, I think. He won a couple of races and he was in the money 80% of the time.”

While the Grimeses have been in the business of selling their foals, they expect to race future stock.

“For 20 years, we were breeding and selling,” Grimes said. “We only had one or two foals  a year, mostly only one, and we sold them. They all went to the races and they all won. We didn't own any of them except Miami Smuggler. We are not famous or anything like that, but we have quite a few win pictures.”

Expect to see the couple back at the OBS sales next spring.

“We are getting older and it's easier on me and my husband,” Grimes said of buying 2-year-olds. “[With breeding] you have to foal the baby out and you have to worry about the mother and the baby and you've got to wean it. That's why it's better when you just go to the sale. They're already broke. We've started wondering, 'Why weren't we doing this all those years?'”

Platinum Gem's two recent victories have attracted offers to buy the promising filly, but the Grimeses are happy to see where the ride takes them.

“We did have calls, but we've turned them all down, so they quit calling,” Grimes said. “We are enjoying this. Who knows how far she is going to go, right? But we are enjoying the moment.”