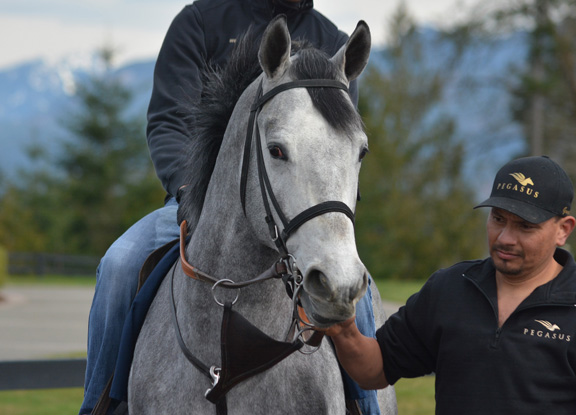 REDMOND, WA – During a brief, but well-delivered toast at a dinner party hosted by Dr. Mark Dedomenico at Daniel's Broiler Steak House overlooking downtown Seattle earlier this week, the cardiovascular surgeon and researcher reiterated his desire to showcase Thoroughbred racing in the Pacific Northwest through the Pegasus 2-Year-Olds in Training Sale.

With prominent longtime Canadian-based owner Peter Redekop buying a total of 10 juveniles for $406,000, led by a $75,000 Candy Ride (Arg)-Sex Appeal (Dynaformer) filly (Hip 6), the auction, on hiatus since 2012, was considered a success by Mike Puhich, trainer and director of horse operations at Pegasus.

“We're gonna name the arena after him,” Puhich said with a big smile of Redekop's support for the sale, held at the indoor arena at Pegasus on a rainy Tuesday afternoon.

Redekop, a real estate developer, owned multiple graded winner Alert Bay (City Zip) and employs trainers such as Blaine Wright and Eddie Truman. He has horses based in California at Santa Anita and Golden Gate and also races at Emerald Downs and Hastings.

“Peter Redekop wanted to support the sale and he just loves the idea of it,” Redekop's racing manager Bryan Anderson commented at the conclusion of the sale. “He likes good horses and they have good ones here. He just wanted to be part of it and support Dr. Dedomenico. Everything is first class here.”

West Point Thoroughbreds went to $90,000 to acquire the sale topper (Hip 5), a colt from the first crop of Graydar. The $50,000 KEESEP yearling, bred in Kentucky by Machmer Hall, was produced by the stakes-placed Salt Lake mare Veronica's Lake. Hall of Famer Jerry Hollendorfer will train.

“We saw this horse at the September Yearling Sale and it's funny how horses sometimes chase you,” West Point's Jeff Lifson commented. “We loved him at the sale, but you can't buy 'em all and he was relatively late in the sale, too. I talked to [West Point CEO] Terry [Finley] [Monday] night and said that this horse was showing like a house of fire. He's beautifully balanced, comes from a great family and Graydar is going to be a very good sire. We're delighted.”

“This is the kind of sale that is a great opportunity for all those people who felt run over earlier in March [at Fasig-Tipton Gulfstream and OBS March],” Lifson added. “I think they're going to be real happy with this sale.”

“I was very happy,” Puhich said of the results. “It meant an awful lot to our crew and Dr. Mark that [Redekop] supported us like that and really sent a message out there. [Owner/breeder] Glen Todd was here supporting us too and those kind of people make us think that this is worth doing again.”

Puhich continued, “We want to put good product out there. The horses that sold are good horses and I hope they go on and do well. I think it's something that we can build momentum off of.”

Dedomenico, who play a major role in developing coronary bypass surgery, has campaigned standouts like champions Blind Luck (Pollard's Vision) and 'TDN Rising Star' She's a Tiger (Tale of the Cat). The recent recipient of a kidney from his wife, Dedomencio was still out making the rounds during the sale.