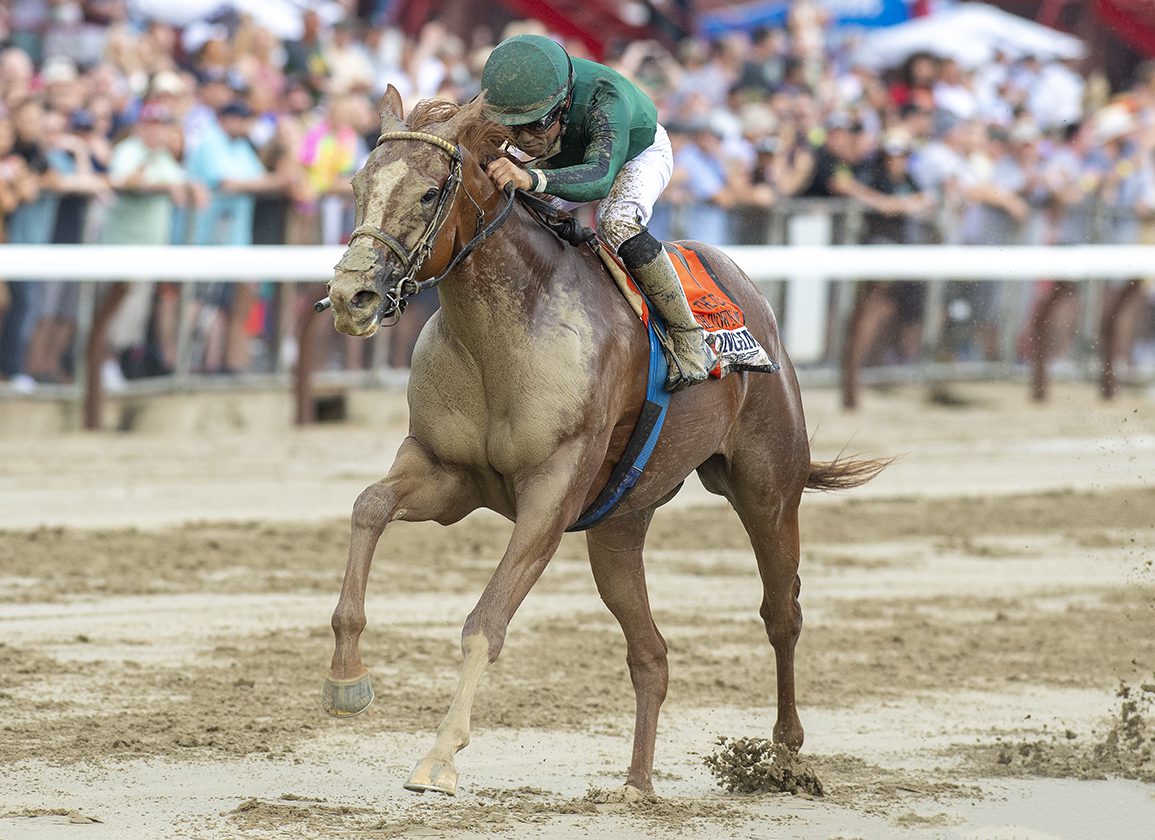 The 'Graveyard of Favorites' claimed another victim Saturday at Saratoga, as Joel Rosario guided Castleton Lyons' Chi Town Lady (Verrazano) to a last-to-first 17-1 upset of overwhelming favorite Matareya (Pioneerof the Nile) in the GI Longines Test S. at the Spa.

Debuting with a three-length score last April at Keeneland, the chestnut went unseen for over four months, but returned with an impressive conquest of the Bolton Landing S. on turf. That had been her last trip to the winner's circle, however, as she concluded her juvenile campaign with a sixth against males in the GIII Futurity S. and a fourth back on dirt in Keeneland's Myrtlewood S. before running last behind Matareya in the Apr. 10 GIII Beaumont S. in Lexington and second in a Churchill allowance May 19.

Having to be backed out and re-loaded after acting up in the gate Saturday, Chi Town Lady settled at the tail of the field as Hot Peppers (Khozan) ran out to a clear lead and Matareya settled in a clear fifth over the recently-sealed track. Hot Peppers clicked off splits of :22.54 and :45.28, while Matareya slipped through at the rail nearing the lane before switching out in early stretch to challenge the pacesetter.

The outcome appeared a fait accompli approaching the eighth pole as Matareya drew on even terms, but Chi Town Lady was just getting going, and soon emerged as a major threat to the dueling leaders after Matareya had a tougher time than expected putting away Hot Peppers. The three came together and bumped at the sixteenth pole, but the contact was inconsequential, as Chi Town Lady had built up a full head of steam by then and kicked clear late, giving Rosario back-to-back graded wins on the card. A brief inquiry was posted, but no action was taken.

“We got lucky. She had been training great and I was looking at this race after her last race in my mind and gave her a little time because she started coming from behind,” said winning trainer Wesley Ward. “I had Joel work her here a couple of times and she was just working phenomenal. I told the owners we were probably going to be running a 30-1 shot, but I wanted to take one shot from way back and do what she's been asking me to do, which is make a big charge and a big grind. We were hoping for a second or third–a graded placing–to see if the race fell apart, and here we are in the winner's circle. She's come a long ways. I just think that I had to kind of learn to listen to her to where she wanted to go easy the first part and come on late. This will be her running style from now on.”

“They went fast in front and she came with a run. That was an amazing race,” added Rosario. “It looked like they came out a little bit and I ran into them a little bit [in the deep stretch bumping incident], but it looked like they were coming more from the inside. My horse was kind of on the wrong lead at that point and I was correcting her trying to keep her straight. She did great.”

As for the beaten favorite, both trainer Brad Cox and jockey Flavien Prat said Matareya didn't handle the track, sealed after mid-day rain.

“My first thought was I didn't think she was traveling that well down the backstretch,” Cox said. “Flavien thought the same, she wasn't really taking them up there. I thought he did a good thing at the three-eighths pole by dropping her down to the inside. It's probably a sign of her just not getting a hold of the track. No excuse really. I think she's a very good filly. Obviously she showed up on maybe not a favorable surface for her, and she still ran a good race.”

“[The rain] changed the track and she never felt comfortable or happy on it,” Prat concurred. “She broke well and after that she spit the bit right away and I never got myself into a nice rhythm and she was just struggling.”

With the victory, Chi Town Lady becomes the seventh graded stakes winner and first Stateside top-level winner for 2013 GI Haskell Invitational S. and GI Wood Memorial S. hero Verrazano. Sold from Coolmore to Brazil's Haras Old Friends in 2019, Verrazano was represented by two Group 1 winners in Chile last year. Chi Town Lady is the first black-type performer from four foals to race thus far out of Toni's Hollyday, whose 2-year-old son Quincy Cafe (Mendelssohn) earned his diploma last Sunday at Laurel. Toni's Hollyday also has a yearling Liam's Map colt and foaled a filly by Game Winner this term before being bred to Not This Time.