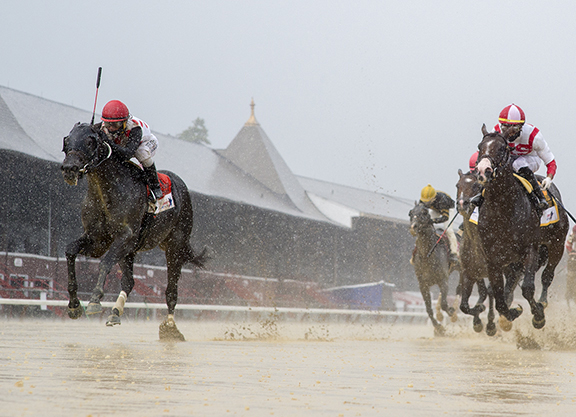 Live Oak Plantation's homebred Win Win Win (Hat Trick {Jpn}–Miss Smarty Pants, by Smarty Jones), victor of the GI Forego S. at Saratoga in his most recent start Aug. 29, has been retired from racing due to a tendon injury. The versatile 4-year-old was targeting a start in the GI Big Ass Fans Breeders' Cup Dirt Mile at Keeneland for trainer Michael Trombetta. Stud plans will be announced at a later date.

“I would like to thank Mike Trombetta and his staff and the Live Oak Stud crew for all the care they gave Win Win Win,” said Charlotte Weber. “He provided us a lot of thrills on the racetrack and I am looking forward to his future as a stallion.”

In the Forego, Win Win Win went from last to first to defeat a field that included four Grade I winners. Last season at three, in his sophomore bow, Win Win Win set a new track record at Tampa Bay Downs in winning the Pasco S., stopping the clock in 1:20.89. He also annexed the Manila S. at one mile on turf at Belmont Park after finishing third in the GII Tampa Bay Derby and second in the GII Toyota Blue Grass S.