Grade I Winner Complexity to Stand at Airdrie 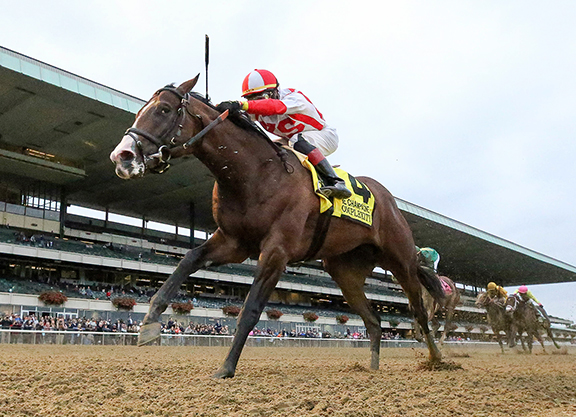 Klaravich Stables, Inc.'s Complexity (Maclean's Music–Goldfield, by Yes It's True) will stand stud at Brereton and Elizabeth Jones's Airdrie Stud upon his retirement from racing, the farm announced Thursday.

Trained throughout his career by Chad Brown, Complexity was a convincing winner of his most recent start, the GII Kelso H. at Belmont, where he defeated multiple Grade I winner Code of Honor (Noble Mission) by two lengths in a time of 1:33.82, earning a 110 Beyer Speed Figure, the highest number earned by any horse at a mile or longer in 2020. Daily Racing Form currently lists him as the favorite for both the GI Breeders' Cup Sprint and the GI Breeders' Cup Dirt Mile.

Complexity was named a 'TDN Rising Star' in his six-furlong 2-year-old debut at Saratoga when drawing off to win by 4 1/4 lengths in 1:09.78. Made the favorite for the Grade I Champagne S. in his second start, Complexity led every step of the way through fractions of :22.51, :45.31 and 1:09.40 en route to a three-length victory over Code of Honor. His final time of 1:34.63 trails only Uncle Mo (by 0.12 seconds) in the last 35 runnings of race, better than Jackie's Warrior, Tiz the Law, Scat Daddy, Daredevil, Union Rags, Maria's Mon, First Samurai, Dehere, Easy Goer and Forty Niner amongst more recent winners.

While a quarter crack partially derailed his sophomore campaign, Complexity still managed to run one of the fastest Ragozin numbers of his 3-year-old crop when earning a 3 in a dominant 7 1/4-length win against older horses at Aqueduct. As a 4-year-old in 2020, Complexity has again returned to top form. Following an impressive allowance victory over Win Win Win (Hat Trick {Jpn}) at Belmont, Complexity laid down fractions of :44.63 and 1:08.90 amidst a blinding rainstorm in Saratoga's GI Forego S. before being caught in the last few jumps by Win Win Win.

Bred in Kentucky by Stonestreet Thoroughbred Holdings, LLC, Complexity is out of the Yes It's True mare Goldfield, who has produced three black-type horses from five to race including Valadorna (Curlin), winner of the Grade III Doubledogdare S. and a narrow second in the Grade I Breeders' Cup Juvenile Fillies. A $375,000 September yearling purchase by Mike Ryan, Complexity was the most expensive yearling from any of the early crops of Maclean's Music.

Said his trainer Chad Brown, “Complexity is a very rare horse that has been number one at every stage of his life. He was the most expensive yearling by his sire, the most highly regarded 2-year-old at Stonestreet and, by far, our stable's best colt of his crop. He's an exceptional talent.”

Added Airdrie's Bret Jones: “We are extremely grateful to Seth Klarman and Chad Brown for the opportunity to stand Complexity. His resume is that of a sensational stallion prospect. He was a brilliantly precocious Champagne winner that has trained on to run the highest speed figure of any horse in America at a mile or more. He's by a truly ascendant sire that looks to have every chance to be important. He's from a top-class Stonestreet female family, he was purchased by one of the all-time great judges in Mike Ryan and his talents are revered by one of the all-time great trainers in Chad Brown. Our hope is that he will be Mr. Klarman's next Breeders' Cup winner and we are committed to giving him tremendous mare support in working to make him a great Airdrie stallion.”

Complexity will stand for $12,500 S&N for any contract signed and returned before this year's Breeders' Cup.

Airdrie also announced the entirety of its 2021 fees. Said Bret Jones, “In keeping with what should always be the goal of any stallion farm, we feel we have priced our stallions where breeders have the opportunity to profit in the sales ring and help their mare produce Saturday horses. We are extremely proud of our young roster that includes Cairo Prince, the leading third-crop sire by stakes winners, stakes horses, graded stakes winners and graded stakes horses; Upstart, who is currently the number one first-crop sire in America by winners and is equaled only by Maclean's Music with his four 80+ Beyer performances by his 2-year-olds amongst all stallions; and Summer Front, who is outpaced only by American Pharoah and Constitution with three graded stakes winners from his first crop of 3-year-olds.

He continued, “All three of these leading young stallions began their stallion careers at a fee of $10,000 and we feel demonstrate the success that comes from the tremendous support they receive from Airdrie and our incredible, loyal breeders. Our Grade I sires Creative Cause and Include have come from similarly humble beginnings to become successful, proven stallions and we could not be more bullish on our young roster that includes Collected, Preservationist, McCraken, American Freedom, Divisidero and, of course, our new stallion, Complexity. As always, we look forward to the upcoming season and helping the wonderful breeders that make our sport happen in any way we can.”

*5% discount applies for payment by Nov. 1 of year bred, on LF terms