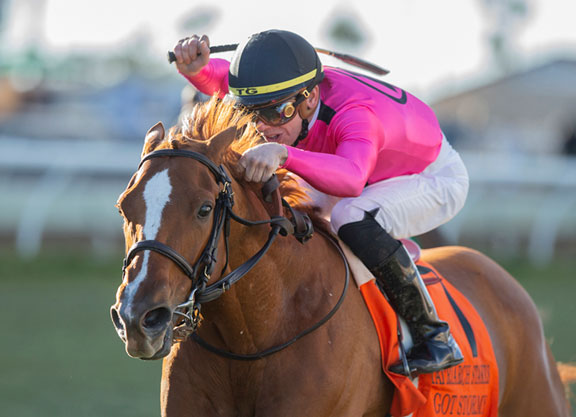 It won't take long for the stars to come out at the abbreviated Belmont spring/summer meet, as multiple Grade I winners Got Stormy (Get Stormy) and Rushing Fall (More Than Ready) headline a stout six-horse field in Wednesday's opening-day feature at Big Sandy, the GIII Beaugay S.

Third at 21-1 behind Rushing Fall in the GI Coolmore Jenny Wiley S. last spring at Keeneland, Gary Barber's Got Stormy developed into a turf terror over the summer, capturing the De La Rose S. Aug. 3 at Saratoga and famously coming back on just seven days' rest to soundly beat the boys in the GI Fourstardave H. Runner-up against males again in the GI Ricoh Woodbine Mile S., she filled the same slot behind champion Uni (GB) (More Than Ready) in an all-female exacta in the GI TVG Breeders' Cup Mile, and capped her scintillating 4-year-old campaign with a score in the GI Matriarch S. Dec. 1 at Del Mar. The chestnut will look to bounce back from a pair of defeats to kick off her 2020 campaign, as she was an uncharacteristically dull fourth at 1-5 in the GIII Endeavour S. Feb. 8 at Tampa before finishing second by a neck last out at 11-10 in the GI Frank E. Kilroe Mile S. Mar. 7 at Santa Anita.

e Five Racing Thoroughbreds' Rushing Fall also will try to rebound from a pair of losses as the heavy favorite in her first start since October. Beaten just a neck in her first seven outings, a stretch that included victories in the GI Breeders' Cup Juvenile Fillies Turf and GI Queen Elizabeth II Challenge Cup S., she picked up where she left off last spring with a pair of triumphs in the Jenny Wiley and GI Longines Just A Game S. Not quite able to stay with powerhouse barnmate Sistercharlie (Ire) (Myboycharlie {Ire}) when second in the GI Diana S. July 13 at Saratoga, the bay was last seen running fourth behind Uni as a 13-10 chalk in the GI First Lady S. Oct. 5 at Keeneland.

R Unicorn Stable's Call Me Love (GB) (Sea The Stars {Ire}) adds international intrigue as she makes her first North American start for the Christophe Clement stable after spending her first two seasons in Italy for Alessandro Botti. Starting her career with three dominant victories, the chestnut was third in the G2 Derby Italiano, G2 Oaks d'Italia and Pietro Bessero S. Back on track with an easy conquest of the G3 Verziere Memorial Aldo Cirla Oct. 12 at San Siro, she earned her most significant win to date in the G2 Premio Lydia Tesio last out Nov. 3 at Capannelle.

Rounding out the field are millionaire Fifty Five (Get Stormy), Xenobia (Ire) (Falco), an impressive winner of the course-and-distance GIII Athenia S. last fall, and Passing Out (Orb), an improving longshot for the Shug McGaughey barn.