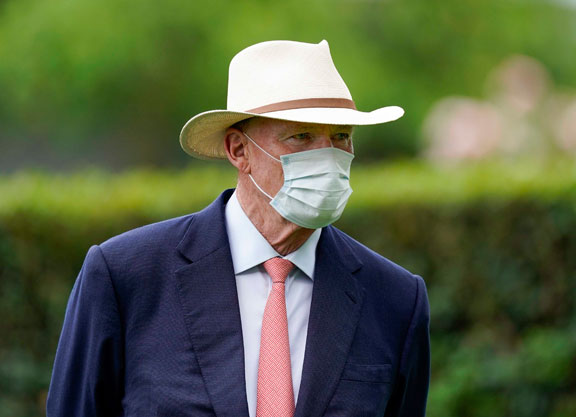 Racing Post reports that Gosden stated at a hearing on Tuesday that Royal Line received 15 milligrams of the medication Adcortyl, which contains TCA, in both hind fetlocks 17 days out from the 2019 Long Distance Cup, which is outside the 14-day mandatory stand-down period for the medication introduced in 2015. Gosden said he accepted responsibility for the positive test but said he feels trainers and veterinarians need greater guidance from the BHA, which does not have a published detection time for TCA.

“The BHA does not provide detection time for intra-articular corticosteroid because it recognises the difficulty in establishing reliable ones,” Gosden said in his pre-submitted statement to the panel. “It abdicates almost all responsibility in this matter, leaving vets at the coalface with the lingering feeling that they are in effect conducting clinical trials for the regulator and suffering the consequences along with their clients of any adverse analytical finding. TCA is the most commonly used intra-articular corticosteroid in the equine practice. It has been shown in peer review studies to have therapeutic protective effects on articular cartilage–it does not destroy the cartilage.

“I'm very conservative with my use of any medication and the horse's welfare is paramount. I followed all guidelines and advice and the negative publicity from this matter reflects badly on the trainer, the highly respected Newmarket Equine Hospital practice and inevitably damages the image of racing. I feel exceptionally let down by this process.”

Gosden added, “What I'm really asking is that the BHA, who are doing a fine job of policing our racing, give us more help on this matter. There's no point recalibrating [testing] machines and literally just trying to trap us all. Something we've done for 25-30 years is suddenly no longer correct. I do feel I'm walking in a minefield now. I fully accept the findings, he had it in his system, but I do worry very much for our future as to quite how we're meant to manage this situation. I would prefer a more collegiate approach with the BHA where we work together.”

The BHA panel said they did not suspect anything untoward in this case, but the rules of strict liability led to the fine and disqualification.