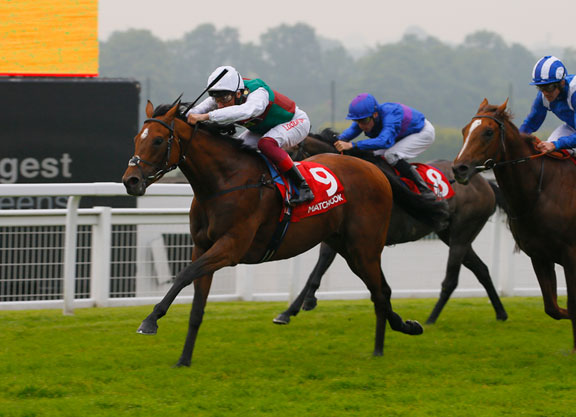 As breeders of unbeaten Triple Crown hero Justify (Scat Daddy) John and Tanya Gunther have had an unforgettable summer so far and things could get even better for the father and daughter team when their homebred Without Parole (GB) (Frankel {GB}) togs out for the G1 St James’s Palace S. at Royal Ascot next week. The John Gosden trained half-brother to GI Breeders’ Cup Dirt Mile winner Tamarkuz (Speightstown) missed his engagement in the G1 QIPCO 2000 Guineas due to a bruised foot but recovered from that to land the Listed Heron S. at Sandown May 24 and preserve a perfect three race record. “The ground was against him at Sandown and we did the minimum of work to go there as he had that bruised foot and he stood in his box for 12 days,” John Gosden said. “He worked last Saturday and we are happy with him. The plan now is to run in the St James’s Palace Stakes.” Without Parole, who is near favourite for the race at this early stage, will face a different calibre of opposition at Ascot compared to what he has faced so far and they could include horses that have already won or been placed in Classics, such as Tip Two Win (GB) (Dark Angel {Ire}) and Romanised (Ire) (Holy Roman Emperor {Ire}). Ken Condon’s G1 Tattersalls Irish 2000 Guineas winner Romanised is rated 10 pounds superior than Without Parole and bookmakers seem to be treating his Curragh performance with caution as he is currently an 8/1 chance for Ascot despite a clear-cut victory over US Navy Flag (War Front).