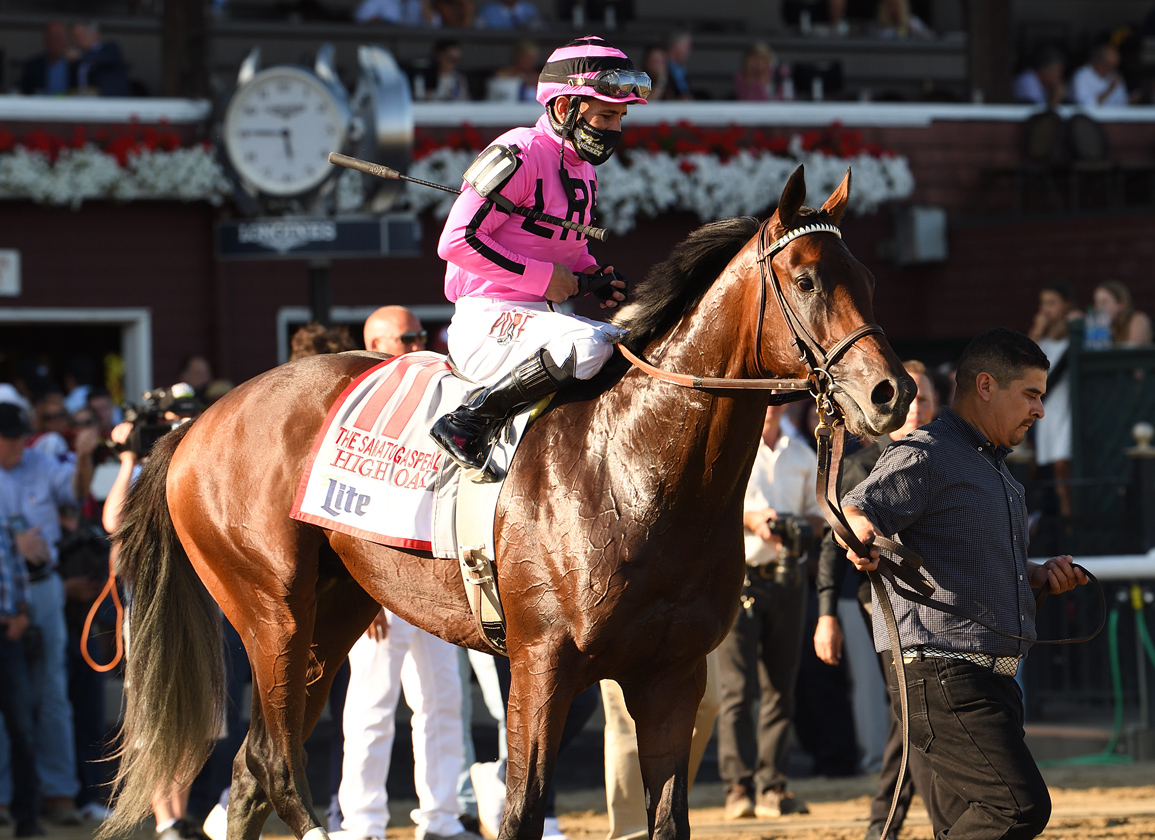 Having signaled his readiness with a :48.11 bullet breeze last week on the Oklahoma Training Track in company with his older Grade I-winning stablemate Casa Creed (Jimmy Creed), who would finish third in the GI Fourstardave H. one race later, the bay stalked out wide behind splits of :21.82 and :44.93 set by Gunite. He ranged up in the clear to challenge at the top of the lane, wore down the pacesetter past the eighth and poured it on from there to prove clearly best.

“He broke very sharp today,” noted winning rider Junior Alvarado. “He was a whole different horse today. He was mentally prepared and sharp. To be honest, I was just a passenger today. He put me in the spot that I wanted and he took me all the way around. When I turned for home, I just had to ask him a little bit and he took off.”

“We were just off the pace so he was right behind them,” Mott said. “He was running plenty fast enough himself. When they hung up those fractions, I thought he'd have to be pretty good to hang in there himself.”

As for working the youngster with 5-year-old Casa Creed, who is also owned by Lee Einsidler's LRE Racing and Mike Francesa's JEH Racing: “If they're going to run in these kind of races they better be able to do that. We just gave him some company to go with and thought they looked like a good pair. He was very professional today. We were very pleased. He's been a little tough to handle, but great in the paddock, great on the race track. He did everything right.”

The GI Champagne S. Oct. 2 appears a logical next step.

“You certainly would look at him and say that a one-turn mile is going to be okay,” Mott said. “I guess you find all those things out as you go along. It's usually guesswork until you do it… I'm sure there will be plenty of discussion with Lee. He's probably not going to want to pass up too many spots, but we'll talk and figure out a game plan.”

High Oak is one of six winners for Spendthrift freshman Gormley, a debut winner late in the Del Mar meet as a juvenile who stretched out to take the GI FrontRunner S. in 2016 and added the GI Santa Anita Derby the following year. Gormley was also represented last month by GIII Sanford S. runner-up Headline Report.

Dam Champagne Sue was an $80,000 KEENOV '10 purchase by Catherine Parke while in foal to Seeking the Dia. The Oaklawn maiden special weight and Fair Grounds allowance winner is a half to GSWs Golden Itiz (Tiznow) and Sapphire n' Silk (Pleasant Tap)–also a graded stakes-winning produer–as well as the dam of GI Breeders' Cup F/M Turf heroine Shared Account (Pleasantly Perfect). Champagne Sue produced a Super Saver filly in 2020. She was barren to West Coast the following season, and was bred to Instagrand for 2022.