Home » Archive » Shared News » Good News, But Not For Korea, In KRA Trophy

Good News, But Not For Korea, In KRA Trophy 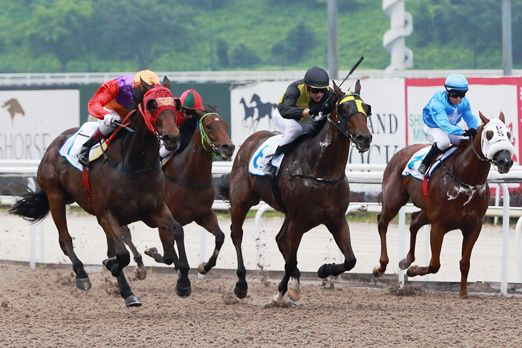 The H. K. Tan-trained Good News (Aus) (Charge Forward {Aus}), the 6-1 third choice in a field of 10 for last Sunday's S$250,000 Korean Racing Authority Trophy (1200m AWT) at Singapore's Kranji Racecourse, endured a wide trip around the turn, but kicked on nicely to post a one-length victory over 8-5 favorite Lincoln Road (NZ) (Swiss Ace {Aus}) (video). Triple Five (Girolamo), best-backed of the three horses in from Korea for the event, disputed the pace, but dropped away to finish ninth at odds just under 9-1. The highest finisher of the invading trio was 53-1 Parang Juuibo (With Distinction) in sixth.

“This horse has been with me for only a short while [previously with Alwin Tan], but he's proven himself to be a very genuine individual,” said the winning conditioner. “He got over some ulcer issue after his last start and his work has been good leading up to this race. Though I didn't know much about the Korean horses, I was confident we had the home advantage. The fast pace suited him. I was smiling when I saw them fighting for the lead, but I was still worried he would not be able to make it. Lincoln Road is a good horse, but I thought before the race we could beat him as he only has a short sprint.”

“On that win, I will have to enter him,” said Tan. “[Jockey] Benny [Woodworth] is very keen to go as well, as he's ridden there before and knows the track well.”

Trainer Steven Burridge also has his eye on the Korea Sprint with the progressive Luminiff Lad (Ire) (Iffraaj {GB}), who annexed a BM67 handicap to score for the fourth time in nine starts Sunday afternoon (video). The 4-year-old gelding had been under consideration for the KRA Trophy before opting for the softer spot.

“I thought I'd throw him in [the KRA Trophy], but went for that race in the end,” said Burridge, who took over the training of Luminiff Lad when former trainer Brian Dean relocated to Korea. “Before today's race, I told myself I would consider that Korean race if he wins, and now that he's won, I guess I will be talking to the owners very soon.”

The Korean Sprint is the race formerly known as the Asia Challenge Cup, which Singapore-based El Padrino (NZ) (Mr Nancho {Arg}) scooped in 2014.