Good Magic to Stonestreet For a Break, Classic Still Possible 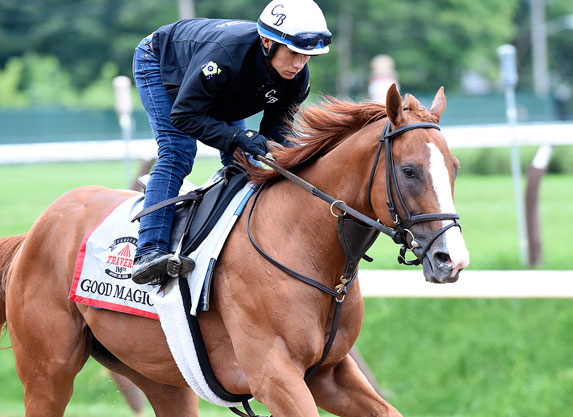 Though champion Good Magic (Curlin) did not come out of his lackluster performance in the GI Travers S. with any apparent problems, his owners have decided to send him to Stonestreet Farm in Lexington in order to give him an extended break. Stonestreet is the co-owner of Good Magic along with Bob Edwards's e Five Racing.

“We'll go back to Kentucky and will get him checked out and then turn him out and let him be a horse for a little bit,” Edwards said. “We'll let him tell us what he wants to do next. He'll get treated like a king at Stonestreet. Once he's in Kentucky, we'll let the horse tell us what he wants to do. He doesn't look terrible. He was a little dull personality-wise after the race. He's a competitor and maybe he was disappointed in himself. He's back to his old self, happy and friendly. It's nice to see him back that way.”

Edwards believes that a long campaign finally caught up with Good Magic.

“It was probably a combination of things, including going through the Derby preps and the [GI] Kentucky Derby and the [GI] Preakness and then the [GI] Haskell. It was a long campaign and it takes a lot out of a horse. He just didn't fire. He came out of the gate a little off and just couldn't make up the speed. It was a speed-oriented race. That 1-2-3 spot around the track was super fast that day. The winner ran an unbelievable race and deserved to win. He deserves some time off. He's done real well by us and he hasn't been out of training at all and has been running hard since the [GII] Fountain of Youth and now deserves a break.”

Good Magic was never a threat at any point in the race, which was won by Catholic Boy (More Than Ready). He broke awkwardly, but managed to move into sixth down the backstretch. From there, though, he began to back up and finished ninth of 10. He was beaten 15 1/2 lengths. Edwards, who, during his brief time as an owner, has not experienced many setbacks, admits he was a bit numb after the race.

“You have to draw a line through it,” he said. “It's his only bad race and everybody has a bad race now and then. I had my 24-hour period of mourning. We're not used to getting pounded like that. I texted [Stonestreet's] Barbara [Banke] and asked what the acceptable mourning period is and she said one day. Like any sport you have to have a short memory”

Because the Haskell is a 'Win and You're in” race for the Breeders' Cup, Good Magic will not have to pay entry fees to enter the GI Breeders' Cup Classic.

“We have a free pass to get into the Breeders' Cup and we don't want to waste it,” Edwards said. “If the horse tells us he wants to go there we'll go there. If it doesn't look like he's ready we won't go.”

A well-bred horse who is a Grade I winner at two and three, Good Magic has already established his credentials as a sire, but Edwards said that it is likely he will run next year.

“He's a competitor so I expect he's going to want to sign another year contract and compete again,” he said. “I had dinner with Barbara a few nights ago. They're not opposed to running him next year and neither am I. There's some big money races out there. Look how well they did with Gun Runner (Candy Ride {Arg}).”

As for the other top horse in his barn, Edwards said that Rushing Fall (More Than Ready) came out of her win in the GII Lake Placid in good shape and will be pointed for the GI Queen Elizabeth II Challenge Cup at Keeneland.

“She's a monster,” he said. “She's something special. She's only a few stalls apart from Good Magic and it's amazing how much bigger than him she is.”