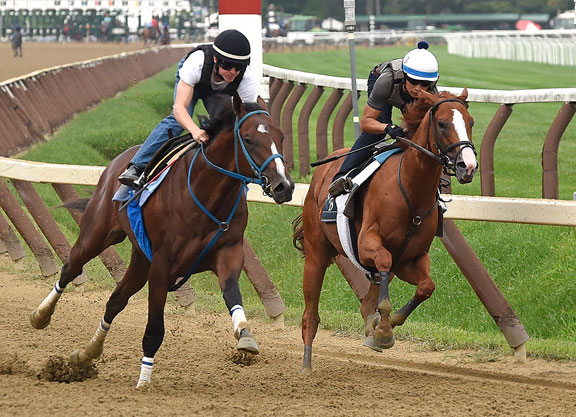 eFive Racing and Stonestreet Stables' Good Magic (Curlin) tuned up for next Saturday's GI Runhappy Travers S. with a strong five-furlong drill Friday morning that was clocked in 1:00.44 (1/17) over the Saratoga main track.

“He worked great,” trainer Chad Brown told the NYRA notes team. “He couldn't have done any better. I would have preferred to work him Saturday, but I left Friday as an option based on the schedule he's been on. I just wanted to work him one of those two days.”

Brown said that Gronkowski (Lonhro {Aus}), last seen finishing second to Justify (Scat Daddy) in the GI Belmont S. June 9, would have his final pre-Travers workout either Saturday or Sunday.

“He's on a different schedule,” said Brown of the Phoenix Thoroughbreds runner. “I have to do what's best for my horse. I'm flexible. I have a lot of options.”

Vino Rosso (Curlin), who will look to give trainer Todd Pletcher a third win in the Midsummer Derby, worked to the inside of his stablemate and 2017 GI Belmont S. hero Tapwrit (Tapit) and was credited with a half-mile in :49.02. Pletcher said that the GII Wood Memorial S. hero “worked very well, enthusiastic and galloped out nicely. It was the work I was hoping he'd put in before the Travers.”

Fourth in the Belmont, Vino Rosso found his best stride too late when beaten three-quarters of a length into third by Tenfold (Curlin) in the GII Jim Dandy S. July 28.

“He can be an inconsistent sort, he's a little bit finicky about how much moisture is in the track,” said Pletcher. “In retrospect, that track was a little wetter than he liked in the Jim Dandy, and I think that was the reason it took him so long to get involved. He seems to like a drier surface, so we'll see what happens on Travers day.”

Queen's Plate and Prince of Wales S. winner Wonder Gadot (Medaglia d'Oro) has eschewed Saturday's GI Alabama S. against her peers and the third leg of the Canadian Triple Crown–the Breeders' S.–in favor of a start in the Travers, in which she'll try to emulate her sire who won the race in 2002. Working by her lonesome just before 6 a.m. Friday morning, the Gary Barber colorbearer was timed in :47.60 for four furlongs, with an opening two panels in :23.81. She galloped out five-eighths of a mile in 1:00.66, a time that would have ranked second at the distance behind Good Magic.

“She goes in 47 and three[-fifths] like most horses go in 51. She's truly amazing,” said trainer Mark Casse. “She's sharp. She has a high level of energy all the time. By the time she's finished cooling out this morning, she'll be jumping around and trying to kick people. Now, you want to have an easy week and hope everything goes smoothly. This is our lives: you get them to a point where they're ready and now you're sitting and waiting.”

*The Travers appears set to have a European flavor, as trainer Aidan O'Brien is set to saddle tearaway G2 UAE Derby winner Mendelssohn (Scat Daddy) and Seahenge (Scat Daddy). Each made their most recent appearances in the GIII Dwyer S., finishing well-beaten in third and fifth, respectively, to GI H. Allen Jerkens S. candidate Firenze Fire (Poseidon's Warrior). The Ballydoyle runners are due into Saratoga Tuesday.