Good For You, Todd 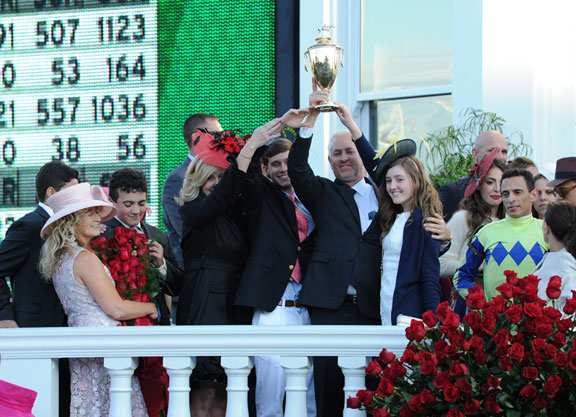 Even a pair of sunglasses couldn't hide the tears that were streaking down Todd Pletcher's face as he was being interviewed moments after Always Dreaming (Bodemeister) crossed the wire on top in the GI Kentucky Derby. It was not exactly what you would have expected from Pletcher. Mr. Cool, Calm, Collected.

No matter what he might have said all these years and in the aftermath of yesterday's win, those tears told the real story. One-for-45. How he must have hated that stat. And how can you blame him?

Pletcher is the most successful trainer of his generation, yet he somehow became better known for what he hadn't accomplished than what he had. Even with a Derby win to his credit, Pletcher had become the guy who couldn't close the deal. The great quarterback who had never won the Super Bowl. The golfer who bogeyed the last hole to lose the Masters. He didn't have a monkey on his back. He had a gorilla.

Yet, he never got snippy with anyone who brought up his Derby record or let on that it truly bothered him. The numbers took on a life of their own and became an awkward, uncomfortable story for a trainer who is blessed to, every year, start off the season with a dozen or so talented 3-year-old colts in his barn. But Pletcher handled the matter with admirable class and patience, all the more remarkable when you see how emotional he was yesterday after the victory.

Pletcher is anything but the underdog, but it was impossible not to feel good for him yesterday. He may be racing's Goliath, and the worst horse in his mammoth barn is better than the best one in the stable of most trainers. Usually, you root against guys like that. Yet, there's not an arrogant bone in his body and Pletcher got to where he is because he works his tail off and he's very good at what he does. He deserved this.

“There was a lot of talk about our Derby record and we were hoping for another winner, and that made this one all the more sweet,” Pletcher said only a few minutes after the race.

When asked by NBC's Kenny Rice if those were tears he saw underneath the sunglasses, Pletcher could barely get out an answer.

“Yeah,” he said and then paused. “Absolutely.”

And these were not crocodile tears. He was flat out, seriously, big-time crying.

He seemed more composed about 15 minutes later during the official winner's circle ceremony. That was all the time that was needed for Todd to be Todd again.

“How tired had you grown of that narrative?” NBC's Laffit Pincay, Jr. asked him in reference to 1 for 45.

“A lot less tired today,” he said. “We've run a lot of horses in it and some of them didn't run so well, but you look at it now and in 17 years we have had two wins, two seconds and three thirds, so it's become a little more respectable now.”

Yes, if you really examined Pletcher's record in the Derby you could explain away a lot of the losses. Always Dreaming was the first favorite he had ever run in the race and he had entered a bunch of horses that didn't really belong. That may have been under orders from his owners or it might have been a case of no one turns down a chance to run in the Derby anymore if their horse has the points or earnings to get into the field. He's also had a bunch of really good horses get hurt in between their last Derby prep and the Derby itself.

Pletcher's horses had a tendency to peak prior to the Derby, leaving their best races on the track in the GI Florida Derby, the GII Wood Memorial or in some other prep. Did he push his horses too hard to get to the Derby only to see them come up short on the biggest day of their racing lives?

He probably did, but if he had been making mistakes on his way to Churchill Downs, he has clearly learned from them. Pletcher usually dominates juvenile racing in New York but he won just one graded race on the dirt for 2-year-old males last year and that was in a sprint, with Theory (Gemologist) in the GIII Futurity S. It was indicative of a trainer who was showing more patience with his prospects.

Pletcher did not train Always Dreaming as a 2 year old. Dominick Schettino did. When Vince Viola's St. Elias Stable bought into the horse, Always Dreaming was transferred to his trainer, Pletcher. He hasn't lost since.

His year started off rather innocently, with a maiden special weight win at Tampa Bay Downs. He then won an allowance at Gulfstream and then rocketed to a fast, impressive win in the Florida Derby. Always Dreaming was following a typical Pletcher pattern. Even though he was a late-developer, would he crash and burn after running so fast in the Florida Derby?

Apparently, Pletcher has learned something along the way, and it is reflected in the way he has had so many 3-year-olds of late come out of the woodwork, at the Gulfstream meet. And he's learned to keep something in reserve. Always Dreaming didn't regress off the Florida Derby. He got better.

Because he's been at this so long and has always been in the spotlight, people forget how young Pletcher is. He's 49. He could easily have starters in the next 30 Kentucky Derbies.

There's going to come a time when nobody is talking about how bad his record is in the Kentucky Derby. The subject, some day, is going to be whether he'll win his sixth Derby, tying Ben Jones for most wins in the race.