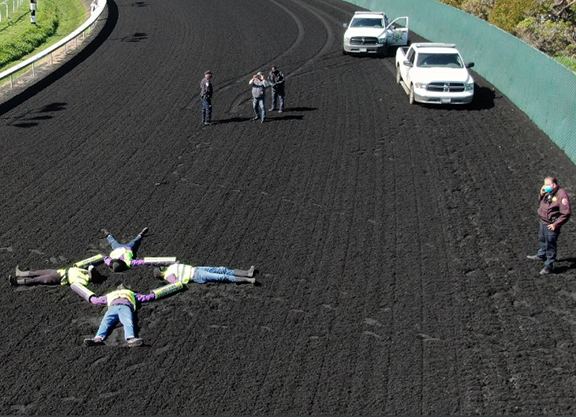 In response to an animal rights-driven disruption to live racing earlier this month at Golden Gate Fields, the company which owns the facility has filed suit against the party responsible, Direct Action Everywhere, a self-described global grassroots animal rights network.

On Mar. 4, four animal rights protestors ran on to the track before the first race, lighting flairs and chaining themselves together with inter-locking pipes over their arms. The organization also flew a drone over the action, which was used to broadcast a live feed of events via Facebook.

The suit, first reported by the San Jose Mercury-News, was filed Mar. 9 in Alameda County Superior Court, and seeks, among other requests, a temporary restraining order against the defendants, and damages of an amount “to be proven at trial.”

Also documented in the suit is the resulting disruption that day to a vaccination drive being conducted on the racetrack grounds.

“The Berkeley Public Health Division was forced to cancel approximately 200 vaccination appointments scheduled for that day,” the filing states. “Defendants' misconduct therefore not only damaged the GGF business but also risked public health and safety.”

The suit specifically lists four members of the animal rights organization–Omar Aicardi, Rachel Ziegler, Rocky Chau and James Crom–believed to be the ones responsible for the disruption.

The suit adds, however, that these are believed to be “fictitiously-named defendants,” and that plaintiffs will seek to amend this complaint “to set forth their true names and capacities when ascertained.”

In a statement, Direct Action Everywhere quotes Chau, who is named in the suit.

“The billionaires pulling the strings here have no regard for horses or workers, and they want to crush anyone who stands in their way. But money can't stop the changing tide of public sentiment. Threats and lawsuits will not stop us from working to end animal racing in the Bay Area and beyond,” Chau is stated as saying.

The Bay Area racetrack has been under a fierce local spotlight lately, due largely to a significant COVID-19 outbreak within the facility at the end of last year that saw hundreds of workers contract the virus.

The prior October, Berkeley City officials wrote the California Horse Racing Board (CHRB) requesting an investigation into equine fatalities at the track.

The CHRB responded with a letter explaining how catastrophic injury rates at the track had remained flat compared to the year prior, before listing a series of increased medication and safety measures the board had recently undertaken state-wide, and intended modifications for the future, including those specifically geared towards Golden Gate.

The suit appears to try to pre-empt expected further actions from Direct Action Everywhere, which is calling for Golden Gate Fields to be shut down.

“Defendants are planning, and will continue, to engage in similar unlawful actions in the future until Defendants achieve their stated goal of shutting down the horse racing business,” the suit states.

On their website, Direct Action Everywhere advertises a meetup scheduled for this weekend to discuss “disruption strategies and tools.”

TDN reached out to a representative for Golden Gate Fields but has not yet received a response.