Going 'Public' In the Hill Prince 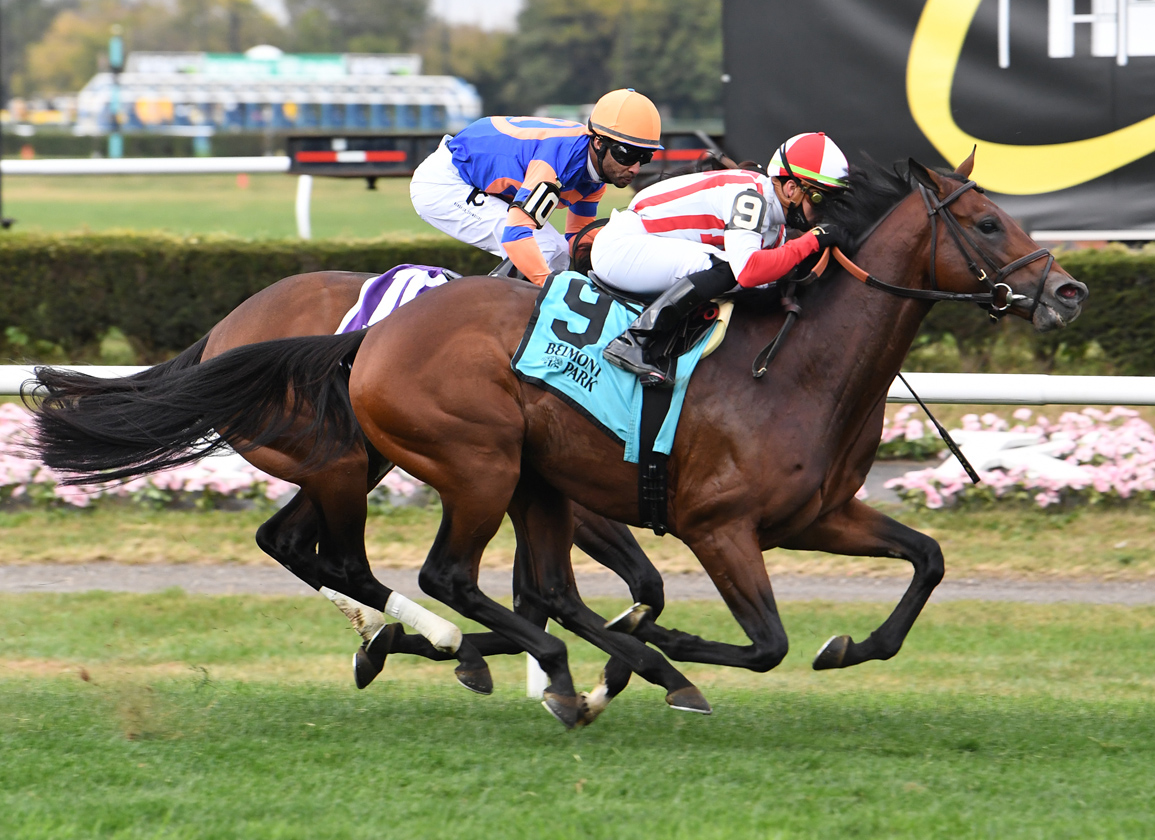 It had been an almost-unheard-of five years since trainer Chad Brown unsaddled the winner of Belmont's GII Hill Prince S., but Klaravich Stables' Public Sector (GB) (Kingman {GB}) put pay to that 'streak', racing within shouting distance of a surprisingly moderate tempo, then finishing with a telling late turn of speed to run his graded stakes winning skein to three Saturday afternoon on Long Island.

A firming 33-10 chance after trading as high as 5-1 early in the wagering, the 170,000gns Tattersalls October yearling acquisition landed in third position and raced a touch keenly as a headstrong Never Surprised (Constitution) took them along through a quarter in :24.35 and a half in just :49.71 while chased by 45-1 It Can Be Done (Temple City). Racing in the two and three path on the turn while slowly gaining on the pace-advantaged leaders, Irad Ortiz, Jr. took a confident look behind and to his right aboard Public Sector with about 2 1/2 furlongs to travel, set his sights on Never Surprised entering the final eighth of a mile and reeled that stubborn rival in to add to his two most recent victories in the GII Hall of Fame S. and GIII Saranac S., both at Saratoga. Never Surprised held for second ahead of It Can Be Done.

Soldier Rising (GB) (Frankel {GB}), favored off runner-up efforts to Saturday's G1 Cox Plate hero State of Rest (Ire) (Starspangledbanner {Aus}) in the GI Saratoga Derby Aug. 7 and to the GI Longines Breeders' Cup Turf-bound Yibir (GB) (Dubawi {Ire}) in the Jockey Club Derby Sept. 1, was done no favors by the lack of tempo and could finish only fifth after racing near the tail of the field. His final three furlongs were clocked in :33.68, bettered only by the fourth-placed Hilliard (Temple City, :33.67).

“He has a great mind, this horse,” the winning jockey commented. “He switched off when I wanted him to and when I asked him to respond, he gave me a great turn of foot.”

Brown indicated that Public Sector would follow in the hoofprints of Domestic Spending (GB) (Kingman {GB}) and make his next appearance in the GI Hollywood Derby at Del Mar Nov. 27.

Public Sector is one of 42 stakes winners and 22 group/graded winners for his wildly successful Banstead Manor-based stallion, whose progeny are flying his flag with distinction all across the globe. Kingman's five-time Group 1-winning son Palace Pier (GB) won the G1 Lockinge S., the G1 Queen Anne S. and repeated in the G1 Prix Jacques le Marois and was second to the unbeaten Baaeed (GB) (Sea The Stars {Ire}) in the G1 Queen Elizabeth S. at Ascot earlier this month. He was recently retired to Darley's Dalham Hall Stud.

Domestic Spending has built on his Hollywood Derby victory this term, adding the GI Old Forester Bourbon Turf Classic (dead heat) and the GI Manhattan S. ahead of a pace-compromised second in the GI Mister D. S. The 4-year-old makes his next start in the GI Longines Breeders' Cup Turf. Kingman is also the sire of top Japanese miler Schnell Meister (Ger), winner of the age-restricted G1 NHK Mile Cup in May and who recently bested G1 Yasuda Kinen hero Danon Kingly (Jpn) (Deep Impact {Jpn}) in a thrilling renewal of the G2 Mainichi Okan.

The last listed produce for Parle Moi is a yearling colt by Golden Horn (GB) that was purchased by SackvilleDonald for 100,000gns at this year's Tattersalls October Book 1 sale.