Going Global the One to Beat, Again, in American Oaks 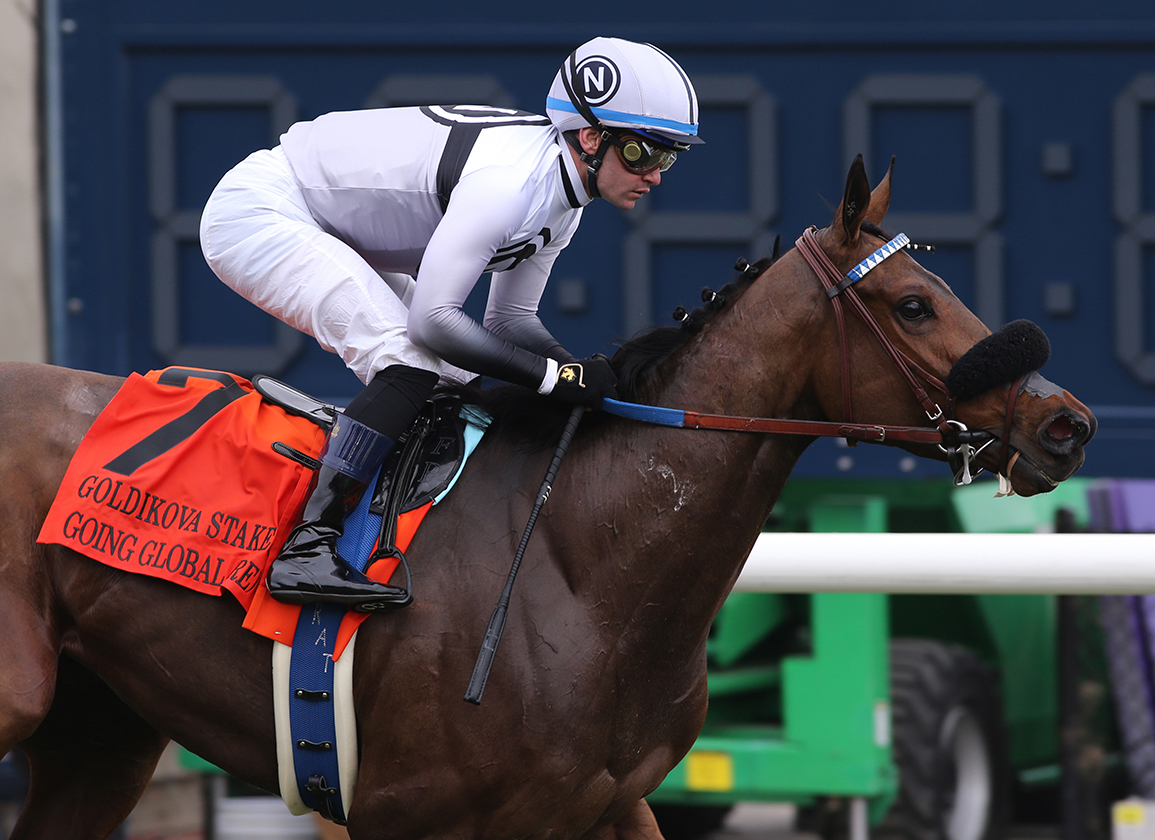 With a 7-6-1-0 record since being imported from Ireland, and having already bested a number of these foes previously, Going Global (Ire) (Mehmas {Ire}) is strictly the one to beat in Sunday's concluding event at Santa Anita, the GI American Oaks. The Phil D'Amato trainee's lone runner-up effort in the States came when she was beaten a half-length in the GII San Clemente S. over a Del Mar mile in July, but she bounced back with a victory in that venue's nine-panel GI Del Mar Oaks Aug. 21. Closing Remarks (Vronsky) was second that day–her third time playing second bridesmaid to Going Global–and Fluffy Socks (GB) (Slumber {GB}) and Ivy League (Medaglia d'Oro) were third and seventh, respectively. Going Global earned a career-best 99 Beyer Speed Figure for her GII Goldikova S. wins over older foes back at a mile at Del Mar Nov. 6 last out. She's never tried this 1 1/4-mile distance, but seems as likely as anyone to handle it. D'Amato will also saddle last-out GIII Autumn Miss S. heroine Burgoo Alley (Ire) (Footstepsinthesand {GB}) for some of the same partners as Going Global.

Trainer Michael McCarthy has four of the field's 11 entrants, and none would be a shock–especially at this distance. Katsumi Yoshida's Nicest (Ire) (American Pharoah) was third in the G1 Juddmonte Irish Oaks while in the care of Donnacha O'Brien, and finished fourth over yielding ground in Keeneland's GI Queen Elizabeth II Challenge Cup S. before being transferred to McCarthy. She was third beaten just a half-length in the 1 3/8-mile GIII Red Carpet H. Nov. 25 at Del Mar. Single Soul (GB) (Dubawi {Ire}) broke her maiden going this distance in New York, and was transferred from Graham Motion to McCarthy after finishing last of five in the Red Carpet. Charges Dropped (Lemon Drop Kid), a daughter of MGSW Criminologist (Maria's Mon), has been on the board in three straight allowances against her elders. Lightly raced Queen Goddess (Empire Maker) comes off a close third in a Del Mar optional claimer Nov. 25.