Goichman Hoping For Some 'Devine' Intervention 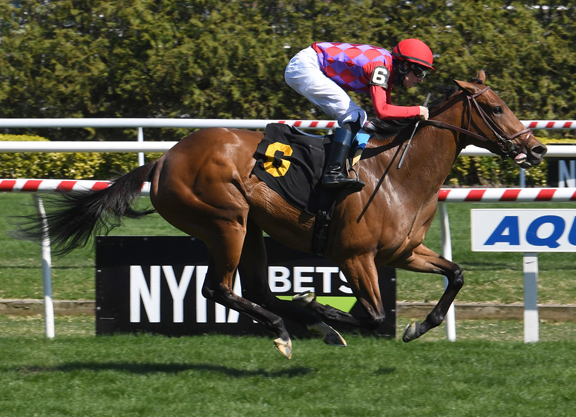 When entries were taken the previous Friday for a six-furlong Aqueduct turf maiden scheduled for Thursday, Apr. 8, you can safely assume that owner Larry Goichman wasn't necessarily brimming with confidence. After all, he was pitching his 200,000gns Tattersalls October Book 1 purchase Star Devine (Ire) (Fastnet Rock {Aus}) in against two well-meant runners from the all-conquering Chad Brown barn, a Godolphin homebred trained by Hall of Famer Bill Mott and a second-timer from the always potent Christophe Clement shedrow.

Goichman approached the start with a can-do attitude.

“You've got to be a positive thinker,” he said. “You have to see the invisible and you've got to feel the intangible and then try to achieve the impossible.”

Going three-quarters of a mile leaves little room for error, but the 3-year-old filly's race was nearly over before it really started when she spotted her rivals several lengths at the start.

“When she kind of walked out of the gate, I'm saying, 'Are we going to be able to achieve the impossible.' Then she rounded the turn and you say, 'Wow!'”

“We're so used to grinding it out, so when you see something that's really special, you're jaw drops,” said Goichman, the founder and president of the Stamford, Connecticut-based SGC Capital. “You can't be a pessimist. It's overcoming the difficult situations that sets apart those of us who are optimists from the pessimists. It's been fun.”

Another Tattersalls Buy For Ryan…

“I am a very big fan [of Fastnet Rock], you don't see too many of them here, and certainly it's a turf family. She's out of a Galileo mare, so if there was ever a recipe for a great turf horse, that's it.”

Star Devine was bred by Rockhart Trading Ltd. and is the second foal from Stars At Night (Ire) (Galileo {Ire}), a full-sister to Irish MGSP Exemplar (Ire) and a half-sister to Blue Bunting (Dynaformer), winner of the G1 QIPCO 1000 Guineas, G1 Darley Irish Oaks and G1 Yorkshire Oaks en route to champion 3-year-old filly honors in England in 2011. Stars At Night was purchased by Mick Flanagan for 350,000gns in foal to Mastercraftsman (Ire) at the 2016 Tattersalls December mares sale.

“She was Mike Ryan's first choice,” he continued. “We were talking on the phone and I loved the pictures I saw of her, I loved her walk. Mike is an excellent judge of horses. I love Mike and when he gives his best judgment, 90% of the time he's right on. Just because a horse walks really well–and I loved the way she walked–doesn't mean they can run at all. Mike said, 'This is the one for you,' and I was actually lucky, because that was my last bid. She could have belonged to somebody else.”

Going Back To The Well…

Goichman is no stranger to European bloodlines and knew soon after getting into the business in 1989 that he wanted to cast his net as far and wide as possible to afford him the maximum opportunity for success.

“I realized that I didn't have the pedigrees that I really wanted, so I began to realize that there are a lot of interesting pedigrees available in Europe,” he said. “So, for about five years, I kept going back there and kept buying horses.”

The first mare he acquired from Europe was the unraced Juddmonte Farms-bred Quiet Rumour (Alleged), who Goichman imported from France in 1997. The mare's second foal for the breeder was Beebe Lake (Grand Slam), a stakes winner of better than $195,000. Goichman later bred Quiet Rumour to another son of Gone West–Elusive Quality–and the resulting foal was Elusive Rumour, whose daughter Myhartblongstodady (Scat Daddy) is a two-time stakes winner in New York-bred company and the current star of Goichman's racing operation.

Goichman employed the services of John Walsh Bloodstock to buy Bubbling Heights (Fr) (Darshaan {GB}) for 22,000gns in foal to Gold Away (Ire) at the 2000 Tattersalls December Mares sale. She would go on to become the dam of Goichman's talented New York-bred turf distaffer J'ray (Distant View), a four-time winner at the graded level and close to $970,000 earner and herself the dam of two-time black-type winner General Jack (Giant's Causeway).

In 2002, Goichman bought Elhasna (Danzig), a full-sister to Dayjur and a half to MGISW Maplejinsky (Nijinsky II) (dam of champion Sky Beauty), for $92,000 from the Shadwell consignment at Keeneland January. That mare's daughter Shea d'Lady (Crafty Prospector) has gone on to produce MSW Kathryn the Wise (Uncle Mo), whose first foal is a colt by American Pharoah that was born in Kentucky Mar. 5.

“Nothing good falls off an empty wagon, and if a page is not a good wagon, you're not going to be successful,” he said. “You look at the opportunity you have with those European pedigrees and there are years and years of history. We are lucky in the sense that over in Europe, it's hard to keep and race a good horse, because the purses are so lousy. In this country, a lot of people are happy to keep a good racehorse and keep a good broodmare.

He continued, “Two of my better mares came from Juddmonte reductions. [Buying out of reductions] is no longer a secret. People have great success with it. I am a devotee of Tesio and I do focus on what I am doing with my pedigrees. You buy a mare over there and end up with a horse like Read the Footnotes and Dean Henry.”

What To Do For An Encore?…

Goichman said there is most likely a stakes race in Star Devine's near future.

“We're really just in the talking stage, but we think there is an opportunity,” he said. “The [seven-furlong GIII] Soaring Softly S. [May 15 at Belmont] may be the next step. It's about a month timing-wise, it'd give her a chance to stretch her legs and go a bit further. So that's what we're thinking about right now. It's the next logical step and it's right in her back yard.”

Can Star Devine be the next feather in the cap of the eternally optimistic Larry Goichman?

“Time will tell. I hope so, I really do. I hope to be having another conversation after hoisting a trophy!”