Goffs UK Riding The Crest Of A Premier Wave 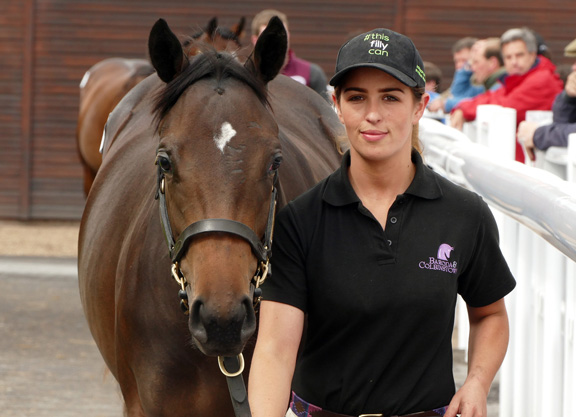 The trend we've seen evolving in recent years at the Goffs UK Premier Sale was emphatically reinforced over the last two days, with records tumbling across all sectors at an auction where 88% of the horses put through the ring could brandish a 'sold' sticker on exit.

There's still a day of selling to be done at Doncaster and if the Silver Sale can boast similar levels of improvement as its Premier big brother then Goffs UK Managing Director Tony Williams and his team will have plenty to smile about come the close of trade today.

As it stands, Goffs UK has been widely praised by an increasingly diverse band of buyers who have descended on Yorkshire to select the cream of a precociously bred group of yearlings from Britain, Ireland, and even a handful from France thanks to Anna Sundstrom and her Coulonces Sales.

The second day failed narrowly to match Tuesday's top price of £270,000 but the Hong Kong Jockey Club's continuing participation on Wednesday saw the session's bestseller signed for at £250,000 by Mark Richards, as ever working the sale in harness with Nick Columb and Grant and Tom Pritchard-Gordon. The sale of lot 295, Camas Park Stud's Dark Angel colt out of the unraced Snowfields (Ire) (Raven's Pass), took the team's expenditure to £855,000 for five colts. A half-sister to Godolphin's Listed winner Army Of Angels (Ire) (King's Best), Snowfields was bought from the Darley draft at the 2013 Goffs November Sale for €120,000 and also has a 2-year-old colt by Sea The Stars (Ire).

Parkin Makes His Mark
Peter and Ross Doyle regularly joust with Shadwell buyer Angus Gold for leading purchaser claims at the Premier Sale and the two operations were near the head of affairs again this time around, with Shadwell spending £1,832,000 on 15 yearlings and the Doyles signing for 21 for a total of £1,297,000.

Ed Sackville and Alastair Donald were also kept busy by a number of different clients, selecting 20 yearlings for £1,345,000, while Joe Foley, buying on behalf of Steve Parkin, bought four colts and five fillies for £1,035,000. Parkin, who races under his company name of Clipper Logistics, has spent the last few years developing Branton Court Stud with Foley's help and currently has 12 broodmares at the North Yorkshire farm.

His list of purchases included the sale's overall top lot–Tuesday's £270,000 Bated Breath colt–and was augmented on Wednesday lot 372, who was bought for £200,000 and was one of three Dark Angel (Ire) yearlings among the group. Bought by Farranamanagh House Stud through Howson & Houldsworth Bloodstock as a foal for 70,000gns, the grey colt was the first foal of the juvenile winner and Listed-placed Abbakova (Ire), a daughter of Dandy Man (Ire), who stands at Foley's Ballyhane Stud.

“He's a really nice colt and the fact that the mare is by Dandy Man is even better,” Foley joked. “Actually she was a really tough mare who was unlucky not to win a Listed race at Tipperary.”

As a purchaser and a vendor at the sale–Ballyhane Stud sold six yearlings for £325,000–Foley was in the perfect position to assess the sale from both angles and was swift to praise the team at Doncaster.

He said, “The quality of horse here has risen noticeably here. Yes, trade is strong but we said on Sunday that we felt there was a really nice bunch of horses here and everybody here had long lists.”

Results of recent years can only have helped to pay a part in the improved standard of yearling on offer at the sale and a number of buyers and vendors pointed to the fact that the traditional type of horse associated with Doncaster is gradually becoming a classier individual.

Tony Williams maintains that this is more a case of evolution rather than a deliberate change in policy from the selection team. He said, “There's no question that we're still after the early type, but also one with a bit of scope–a horse who has the strength and speed to be racing at two but who can go on to be a seven-furlong horse or a miler at three. There hasn't been a change in the selection process but I think that as the profile of the sale has risen, vendors are putting forward horses with more quality.”

Love Of The Dark
No stallion could compete with the mighty Dark Angel at Doncaster this week. From 30 yearlings catalogued, 28 were offered and 24 sold for an average of £114,667. No fewer than 11 brought a six-figure return for their vendor.

On Wednesday, the Dark Angels included lot 327, a filly out of Listed runner-up The Thrill Is Gone (GB) (Bahamian Bounty {GB}), bought by Shadwell for £200,000. The filly's third dam Crime Of Passion (Dragonara Palace) has been a loyal servant to Chris Wright's Stratford Place Stud, her descendants including Bungle Inthejungle (GB) ((Exceed And Excel {Aus}), whose first yearlings are for sale this season. But Wright is entitled to feel attached to both sides of this filly's pedigree as he also raced Dark Angel in partnership with Catherine Corbett.

Where Dark Angel treads, his great rival Kodiac (GB) is never far behind and the Tally-Ho Stud sire was right up there in the reckoning on day two via his son from the winning Hector Protector mare Spring Surprise (GB) (lot 304), who was sold for breeder South Acre Bloodstock through the Norris Bloodstock draft. The half-brother to G2 Dubai Duty Free Mill Reef S. winner Toocoolforschool (Ire) (Showcasing {GB}) will be trained by Ger Lyons, who picked him up for £210,000 for an unnamed client of his Irish stable.

Beckford Boom For Mukhadram Filly
At £200,000, Stratford Place Stud's Dark Angel yearling shared the title of the most expensive filly of the sale with lot 355, a half-sister to one of the best juveniles in Ireland this season, Beckford (GB) (Bated Breath {GB}), from the first crop of Shadwell's Mukhadram (GB).

Bred by Joyce Wallsgrove, who bought the filly's dam for just 9,500gns, she was bought as a foal by Alex Elliott for 31,000gns last December.

“I signed for her as Azziza which was the name of a yacht I once cruised around the Mediterranean on,” laughed the agent, who was unsurprisingly thrilled when the filly, whom he shared with consignors David Cox and David Myerscough of Baroda & Colbinstown Studs as well as fellow agent Mick Flanagan, was knocked down to Eamonn Reilly of BBA Ireland at £200,000.

Reilly confirmed that she had been purchased for Maurice Regan of Newtown Anner Stud. “We bought her half-brother Beckford for Newtown Anner after he won his maiden well for Gordon Elliott, who has done a brilliant job with him. Beckford has a number of entries but I think it's likely he'll go for the Middle Park,” he said.

A Group 1 victory would be the icing on the cake for Beckford, who took the G2 Railway S. at the Curragh on just his second start before finishing a close second to Sioux Nation (Scat Daddy) in the G1 Keeneland Phoenix S. A further update for the family has come this season in the form of the G3 Glorious S. win of Poet's Word, a half-brother to Beckford's dam Whirly Dancer (GB) (Danehill Dancer {Ire}).

Rebel Charge For Next Rajasinghe
With assistance from Bobby O'Ryan, Phil Cunningham's Rebel Racing bought Rajasinghe (Ire) at last year's Premier Sale for £85,000 and, clearly emboldened by the G2 Coventry S. victory for the Choisir (Aus) colt, they joined forces again to strengthen trainer Richard Spencer's string of 2-year-olds for next year.

Top of the list of six purchases by price was a first-crop son of Darley stallion Slade Power (Ire) (Dutch Art {GB}), himself a £5,000 graduate of this sale in 2010. Lot 408 proved to be another good result for Ballyhimikin Stud, which consigned Tuesday's top lot. The son of juvenile winner Black Rodded (GB) (Bahamian Bounty {GB}), from a family that includes Slade Power's fellow G1 July Cup winner Sakhee's Secret (GB) (Sakhee), is his sire's most expensive yearling in the sale at £120,000 of three sold for an average of £69,000.

Ever the optimist, O'Ryan was pleased with the day's purchases and, asked if he'd found the next Coventry winner, he said with a wink, “I believe we have.”

Look Heer
On Monday, TDN profiled Paul McCartan's Ballyphilip Stud, which has been responsible in recent years for breeding Dark Angel colts Harry Angel (Ire) and Battaash (Ire). McCartan spoke of his interest in Dark Angel's first-crop sire son Heeraat (Ire), who stands at Richard Kent's Mickley Stud for £4,000. Impressed by the foals he saw at Mickley last year, McCartan bought several from the field, including the colt out of Lily Agnes S. winner All Fur Coat (GB) (Multiplex {GB}), as well as a breeding right in the stallion.

That decision is now looking a sound one, as All Fur Coat's Heeraat yearling (lot 384) sold for £150,000 to Sheikh Hamdan, who also raced Heeraat, while the stallion's three yearlings at the sale all found buyers at an average price of £76,667.

Among the other yearlings by freshman stallions to find favour at Doncaster was lot 246, an Olympic Glory (Ire) colt from the family of Passing Glance (GB) (Polar Falcon), who sold from the Coulonces Sales draft for £140,000, also to Shadwell.

Rathbarry Stud resident Xtension (Ire), another high-class performer bred by Paul McCartan, had just one yearling in the Premier Sale, lot 205, who was sold on Tuesday by Whatton Manor Stud for £115,000.

Wrapping up a bumper few days at Goffs UK, Tony Williams commented, “This was undoubtedly the strongest ever Premier Sale catalogue we have assembled, we marketed it globally in an effort to establish a world-class buying bench and we achieved that with the sale now enjoying a truly international following.”

He added, “The results this sale consistently achieve on the track gave everyone confidence going into the sale and the last two days have been simply phenomenal, having produced marked increases in figures across the board following a record sale last year. To see the number of six-figure horses grow from 32 to 42 clearly demonstrates that this sale is very much competing for Europe's best yearlings.

“The growth achieved over the last six years has been significant and the demand for 'Donny yearlings' has never been higher following the exploits of horses like Barney Roy and Harry Angel to name just two. We are indebted to our vendors who have once again raised the bar with regards to the quality of yearlings they send to us and we wish our buyers, who descended on Doncaster from around the world, the very best of luck with their purchases.”