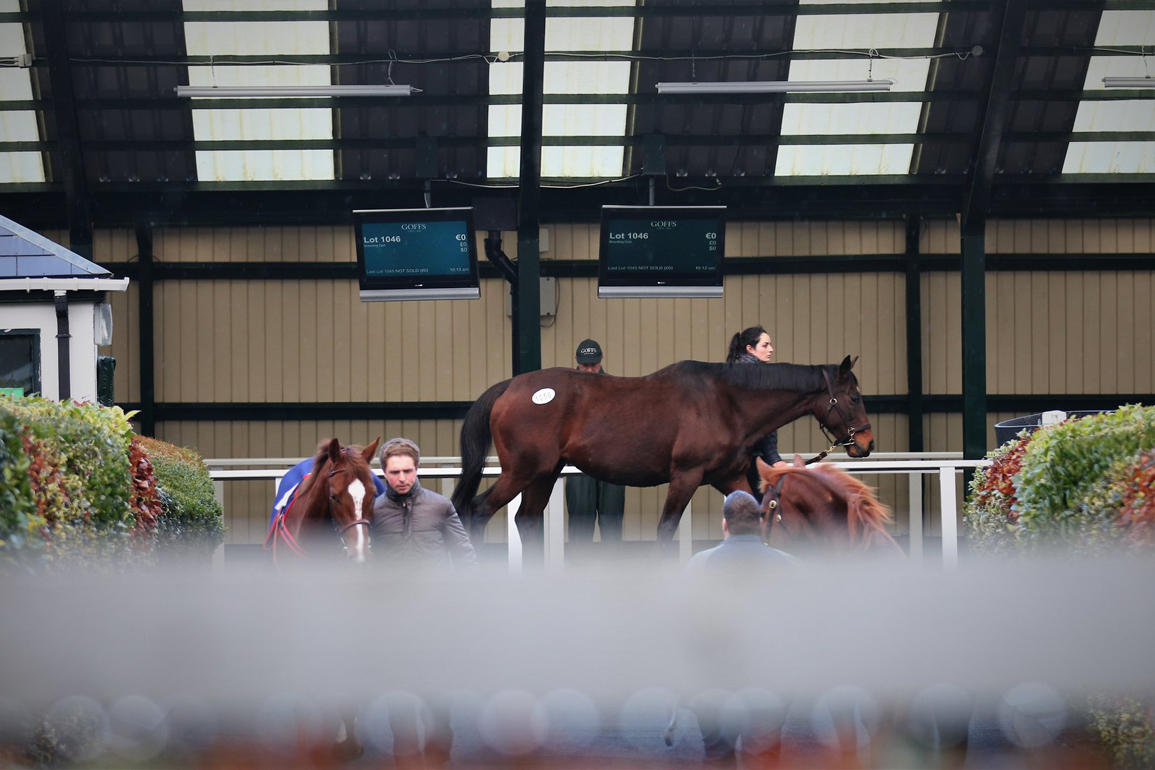 As the bloodstock auction industry rides a wave of resurgence into its final sector of the season, Goffs provides the curtain-raiser in its November Foal and Breeding Stock sales. The action begins next week with four days of foal sales from Nov. 15 to 18, which rolls right into two days of breeding stock on Nov. 19 and 20.

The European marketplace provided some welcome upbeat surprises amid the overall tumult of the pre-vaccine pandemic in 2020, but this year has proven an extreme revelation everywhere, and nowhere moreso than Goffs, where results at the Orby and Sportsman's yearling sales far outpointed their 2020 counterparts and came close to matching some of the sales' headiest past editions. The buoyancy in the yearling market at Goffs trickled down to the recent Autumn Yearling Sale where, even when removing the Derrinstown Stud dispersal that accounted for 24% of turnover, figures were well up on recent renewals.

“We're coming off the back of a strong yearling season, essentially everywhere but none moreso than Goffs at our Orby, Sportsman's, and our most recent Autumn Yearling Sale,” said Goffs Group Chief Executive Henry Beeby. “From right at the top of the market, the millionaire level down to the lower level, we've had an extremely successful time.”

Reflecting on the rebounds of 2021, Beeby added, “last year was a very traumatic time for the world. Whilst we recognize we were a lot better off than a lot of other people were, in bloodstock auctioneering terms we had as much of a challenge as any other sales company in Europe and perhaps the Northern Hemisphere. Ireland took a very conservative approach to Covid, and that's not a criticism, that's what our government decided to do and we're very supportive of that. But it made our lives even harder than it did for some of our competitors. So to be able to rebound in 2021 with a very strong Orby sale held at Kildare paddocks was a delight and a relief. We were very grateful to the Irish breeders who had a rough time last year who then still listened to what we had to say, engaged with the new Goffs Million concept and the new agents and the proactive approach we took. We feel like we're back on track and we have a vibrant sales programme to offer at all levels of the market and for all sectors of the market.”

Demand from foal sellers means the Goffs November Foal Sale catalogue is back up to four full days for the first time since 2018, with 1,015 catalogued.

The Goffs November Foal Sale will provide the only opportunity at a European auction house this autumn to secure members of the penultimate crop of Galileo (Ire). There are three Galileo foals signed on, including a filly who is the second foal out of GI Frizette S. winner Nickname (Scat Daddy) (lot 624), whose full-sister topped this year's Orby sale when bought by MV Magnier for €1.5-million. She is offered by Baroda Stud, while The Castlebridge Consignment sends out a Galileo filly who is the first foal out of G2 Queen Mary S. winner Signora Cabello (Ire) (Camacho {GB}) (lot 665), and a Galileo colt who is the second foal out of the G3 Albany S. third Take Me With You (Scat Daddy) (lot 689), whose full-sister sold to Newtown Anner Stud for €360,000 at Orby.

“The jewels in the crown are the three Galileos,” Beeby said. “They read very well–we're very grateful to the vendors for sending them and we think they'll be very appealing to the market. But it's a foal catalogue of depth and diversity. It has something at all levels.”

Also among the highlights of the catalogue are three foals by Galileo's heir apparent Frankel (GB), and those include a half-brother to G3 Chartwell Fillies S. winner and G1 Matron S. second Lily's Angel (Ire) (Dark Angel {Ire}) and the listed-winning and group-placed Zurigha (Ire) (Cape Cross {Ire}) (lot 626) and a half-sister to Classic winner and sire Sea The Moon (Ger) (lot 652).

The Goffs November Foal Sale has been a happy hunting ground for both end users and pinhookers. The likes of Alcohol Free (Ire) (No Nay Never), Ghaiyyath (Ire) (Dubawi {Ire}) and Blowout (GB) (Dansili {GB}) were sourced by their owners at the foal sale, while River Boyne (Ire) (Dandy Man {Ire}) and this year's G1 Flying Five S. winner Romantic Proposal (Ire) (Raven's Pass) were Goffs November foals pinhooked at the Sportsman's and Orby sales, respectively. This year's Orby sale featured a handful of high-profile pinhooks that were sourced at last year's November Foal Sale, including the Footstepsinthesand (GB) half-brother to Lucky Vega that turned €300,000 into €630,000; a €70,000 foal re-sold for €260,000; a €30,000 foal turned into €150,000 and a €75,000 foal sold for €225,000.

“It's a real pinhookers sale, but it's also a sale that end users have been very successful in,” Beeby said. “It's a very, very good catalogue and we think there will be some very good horses to come out of it, but also, as importantly, some very good pinhooks. We'd be very hopeful going into this year's foal sale that we can return a good trade based on what happened in the yearling market.”

The Goffs November Breeding Stock Sale returns to two days after it was pushed to late December (due to Covid restrictions) and reduced to one session in 2020. The highlight is doubtless Alcohol Free's 11-year-old dam Plying (Hard Spun) (lot 1185), also the dam of listed winner Alexander James (Ire) (Camelot {GB}) and in foal to Lope De Vega (Ire), but substantial drafts from the likes of Godolphin, Derrinstown Stud and the Aga Khan Studs mean that there is strength and depth straight through the sale.

“Last year wouldn't be a good example, but the couple years before that perhaps we had a smaller catalogue than we would have liked since the heady days of the Paulyn and Wildenstein dispersals,” Beeby reflected. “It's really bounded back this year. The horse most people will talk about going into it is Plying, the dam of Alcohol Free in foal to Lope De Vega, and we're absolutely delighted to have her as the centrepiece given that we sold Alcohol Free for her breeder. They [Plying's owner/vendor Jossestown Farm] had a very difficult decision to make because there are plenty of alternatives that do a very good job themselves, but it's wonderful to have her in the sale.

“Several other major breeders have also sent us really significant drafts. We have over 100 horses between Godolphin, and Shadwell under the Derrinstown banner. The Derrinstown dispersal continues and we're delighted they're using Goffs for so many good mares. Godolphin has sent us a very significant draft again, and the Aga Khan has sent us another significant draft. Moyglare Stud has also sent us some very good horses, and The Castlebridge Consignment and Baroda have some very nice mares from their various clients.

“We think it's a catalogue that's deeper and stronger than it's been for a number of years. The purchasers will tell us whether we're right, but that's certainly our view and that's been the initial feedback when people have read the catalogue.”

“We're very proud of both catalogues,” Beeby added. “We're very grateful for the support we've had. I think a key part of our message to people at the moment is that Goffs is continuing to provide a deep, very international buying bench for Irish breeders, and we're very gratified and grateful that Irish breeders are supporting us with such quality. We will do everything in our power to repay that and we look forward to it.”