Goffs, It's Good To Be Back 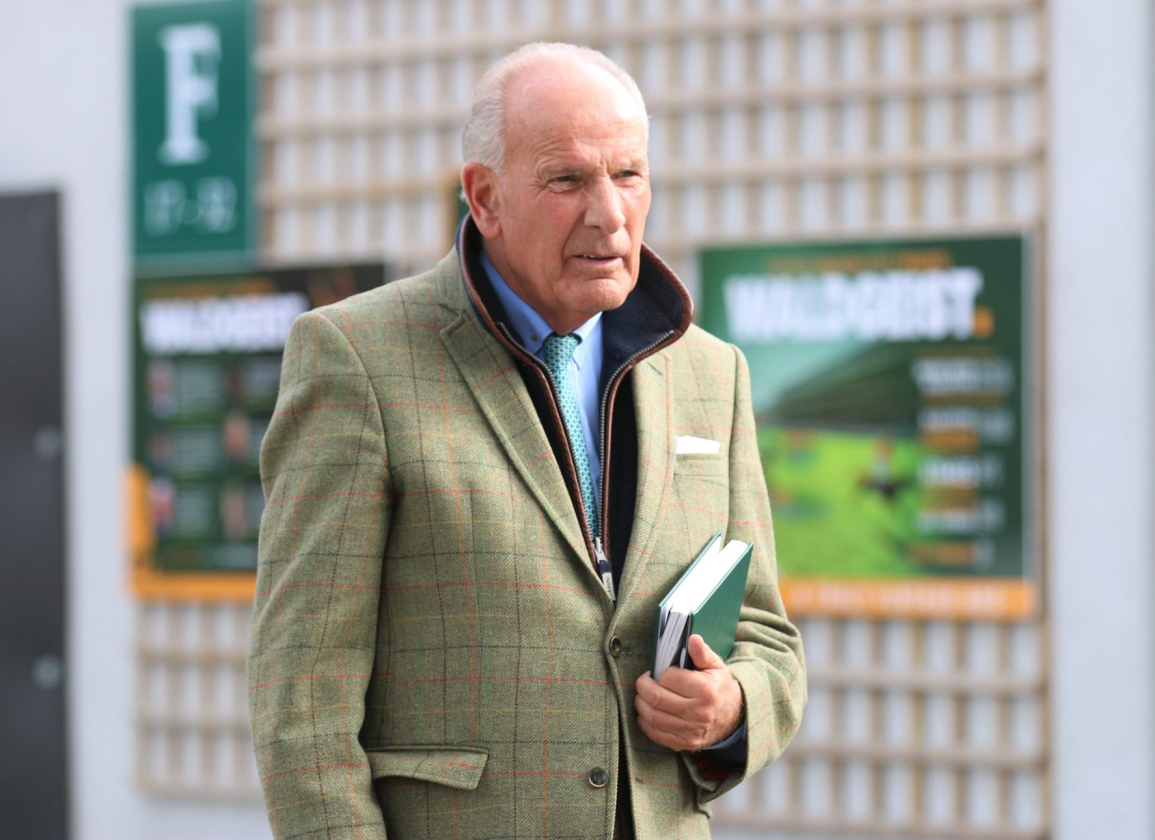 Sir Mark Prescott, trainer of Alpinista and her grandam Albanova, at Goffs

KILDARE, Ireland–There's no denying that bloodstock sales are an important part of the business but it is what happens on the racecourse that truly counts and recent events have put an extra spring in the step of a number of breeders at Kildare Paddocks ahead of the start of the Goffs Orby Sale.

Standing outside her draft of six from Staffordstown on Monday morning was Kirsten Rausing, chatting happily with her staff and brand new director of the stud John Oxx. Rausing broke off every now and then to accept congratulations from passers-by on the second Group 1 win for her homebred Alpinista (GB) (Frankel {GB}) in Cologne on Sunday. One of those passing was fellow owner/breeder Liz Barry of Manister House Stud, whose Astadash (Ire) (Zoffany {Ire}) had won the previous weekend's G3 Denny Cordell Lavarack & Lanwades Fillies S. The race is sponsored by Rausing, who was delighted to see a photo of Barry's grandson Alex holding aloft the giant trophy won by their homebred.

“We all know how much can go wrong with horses,” said Rausing with the experience of a breeder of some 50 years' standing, who has learnt, as we all must, to appreciate the good days.

Fortunately there have been many good days this year for the horses racing in her white and green-hooped colours, as well as for those who started their days in the paddocks of Lanwades and Staffordstown. The weekend started in excellent fashion when Zaaki (GB) (Leroidesanimaux {Brz}) extended his group-race winning streak to five when landing the Underwood S., his second Group 1 victory in Australia for British ex-pat trainer Annabel Neasham.

Later that afternoon, Rausing was on the Rowley Mile to watch Sandrine (GB) (Bobby's Kitten), already the winner of the G2 Duchess of Cambridge S. and G3 Albany S., finish third in the G1 Juddmonte Cheveley Park S. And the breeder was already in Ireland on Sunday afternoon by the time the Sir Mark Prescott-trained Alpinista emulated her grandam  by winning the Preis von Europa 17 years after Albanova (GB) (Alzao) made Germany her own in a glorious summer of three Group 1 victories in Dusseldorf and Cologne.

Germany's leading older horse Torquator Tasso (Ger) (Adlerflug {Ger}) and top 3-year-old Sisfahan (Ger) (Isfahan {Ger}) fought out a thrilling finish to the G1 Grosser Preis von Baden earlier this month, but Alpinista has got the better of both of them independently, the former when she won the Grosser Preis von Berlin in August, while Sisfahan was third in Sunday's Preis von Europa.

So prolific is the Lanwades 'AL' family that it is no surprise that four relations of Alpinista feature among the Staffordstown draft, including a Sea The Stars (Ire) colt out of the G3 Oh So Sharp S. runner-up Alamode (GB) (Sir Percy {GB}), who features as lot 336. The only filly in the consignment (lot 337) features Lanwades stallions on both sides of her pedigree: the daughter of Sea The Moon (Ger) is the first foal of Albizzia (GB) (Archipenko), whose Galileo (Ire) half-sister Alegra (GB) has already produced two stakes winners.

Rausing takes understandable pride that all 20 horses whose names appear in bold type on Albinista's pedigree page were bred at Lanwades, and it is doubtless the long-term thinking, planning and devotion to cultivating various families that has led to a record-breaking season for Lanwades on the racecourse this year.

Power To The Breeders

Similar comments apply to Patrick Burns of Newlands House Stud, whose draft of four contains a full-brother to another of this season's Group 1-winning fillies, Winter Power (Ire) (Bungle Inthejungle {Ire}), herself a graduate of the 2019 Orby Sale.

The breeder points to the catalogue page on the door of the colt who will sell as lot 294 on Wednesday and highlights the names to have appeared since he bought Winter Power's grandam Nordic Living (Ire) (Nordico) as a 4-year-old from Jim Bolger's Glebe House for IR£1,200 in 1995.

“The family's been good to me, and so has the stallion,” Burns said of the clan which includes Winter Power's listed-winning half-sister Hay Chewed (Ire) (Camacho {GB}) and G2 Ridgewood Pearl S. winner Devonshire (Ire) (Fast Company {Ire}).

The stallion in question is his brother Maurice's Bungle Inthejungle, resident of Rathasker Stud and sire of another member of the Newlands House Stud draft (lot 370), the full-brother to G2 Lowther S. victrix Living In The Past (Ire). He has indeed been good to Burns, but then good breeders help to make stallions, too.

Tally-Ho Stud's season just keeps getting better and better, latterly thanks to one of the standout juvenile colts of the year, Perfect Power (Ire) (Ardad {Ire}), who on Saturday added the G1 Juddmonte Middle Park S. to his earlier successes in the G1 Darley Prix Morny and G2 Norfolk S. The enjoyment is undoubtedly extra sweet given that Tally-Ho also bred Perfect Power's sire Ardad–one of two freshman stallions to have supplied the winners of Newmarket's Group 1 races at the weekend, the other being Caravaggio, whose daughter Tenebrism came with a late flourish to land the Juddmonte Cheveley Park S.

Perfect Power's three-parts sister by Kodiac (GB) features among a strong draft from the stud as lot 214, alongside another five yearlings by Tally-Ho's flagship stallion, as well as one by Kodiac's son Kessaar (Ire), who has his first yearlings for sale this year. That colt (lot 384) is out of Bisous Y Besos (Ire) (Big Bad Bob), a mare who has already worked well with another of the farm's young stallions, Galileo Gold (GB), to produce Oscula (Ire), who has provided three updates since the catalogue was printed in winning the G3 Prix Six Perfections and finishing third in both the G2 Prix du Calvados and G2 Rockfel S. on Saturday.

Another whose page has had a major boost since publication of the catalogue is lot 205, Tinnakill House's Dandy Man (Ire) half-sister to the GI Saratoga Derby Invitational S. winner State Of Rest (Ire) (Starspangledbanner {Aus}). The filly may have been bred just down the road from Goffs but the page has a proper transatlantic feel to it. Her dam Repose is an unraced daughter of Quiet American, while the third dam is the champion race filly It's In The Air (Mr Prospector), whose 16 wins include five Grade 1s, while her dynasty boasts such names as the Group 1 winners Storming Home (GB) and Musical Chimes.

Not only has the major win for State Of Rest–who has recently touched down in Melbourne for the next stage of his globetrotting tour–improved the page significantly but the mare's next foal, 2-year-old Tranquil Lady (Ire) (Australia {GB}), won at Galway on Sept. 7 for the same connections, Teme Valley Racing and Joseph O'Brien.

“It's all happening in the family, it's very exciting,” said Dermot Cantillon of Tinnakill House, who bought the grandam Monaassabaat (Zilzal) at Goffs back in 2007 from the late Sheikh Maktoum Al Maktoum's Gainsborough Farm. “She's a lovely filly and seems to be going down very well.”

“We've always been big fans of Invincible Spirit and we bred his first ever winner,” said Hugh Hyland. “We are also fans of his sons, which was why we used Profitable. Quick Suzy was such a nice model that we sent the mare back. It's all about the Breeders' Cup now for Quick Suzy and we're looking forward to cheering her on.”

Quick Suzy's dam, the dual winner Snooze (Ire), also has a Belardo (Ire) colt foal on the ground and is now back in foal to Profitable.

The stud also offers a three-parts-sister to Marcel, by Invincible Spirit himself, as lot 123.

A beautiful autumnal morning for the final day of viewing added to the sense of joy for many at the sale being back in its rightful home of Kildare. Henry Beeby regularly bounds up and down the stairs next to the Goffs press room with a sprightliness that belies his fifty-something years, and his sectionals were livelier than ever on Monday.

“We're delighted to be back here,” said the Goffs Group Chief Executive. “This is what it's all about. It is the Irish national yearling sale and it needs to be in Ireland. Vendors are happy because that's where they want to be. It didn't bear contemplating going elsewhere so we're very happy to be here.”

This year's sale also features the return of the Goffs Million, a race that sets out to do exactly what it says on the tin, offering guaranteed minimum prize-money of €1 million. Graduates of this year's Orby Sale are eligible for the seven-furlong contest, which will be staged on the Curragh on Sept. 24, 2022.

Beeby said, “A noted breeder said to me that it isn't that people might come because of the Million, they will have to come. And happily the purchasers have engaged with it and said it's at the right time and at the right trip. Seven furlongs at that time of the year is the stepping stone to Classic distances, and that's what we are aspiring to sell.”

Acknowledging the difficulties faced by the the relocation of the 2020 Orby Sale to the Goffs UK complex in Doncaster, he continued, “It's no secret that last year's sale was a disappointment to us and wasn't what we hoped it would be, so it was important that we were proactive in addressing those issues, and the Million was a key part of that. We looked at lots of different things. There are some very good incentives and bonus schemes around, but generally the consensus was to have something you could get your teeth into–it's got prize-money down to tenth place, and it's got the Group 1 bonus if the winner goes on to win a Group 1 race. We've also appointed new agents in America, and created an entirely new role and agent in England and in France to add to our other agents, and that's been important. After last year we did a lot of talking to a lot of people and we had to be proactive.”

He added, “Time will tell but, happily for us, breeders have backed us with some lovely horses and the standard of the individuals is high. I've been getting some very good feedback over the last few days.”

The Goffs Orby Sale takes place on Tuesday and Wednesday from 10am each day.