Godolphin's Clean Sweep On The Cards As Coroebus Scores 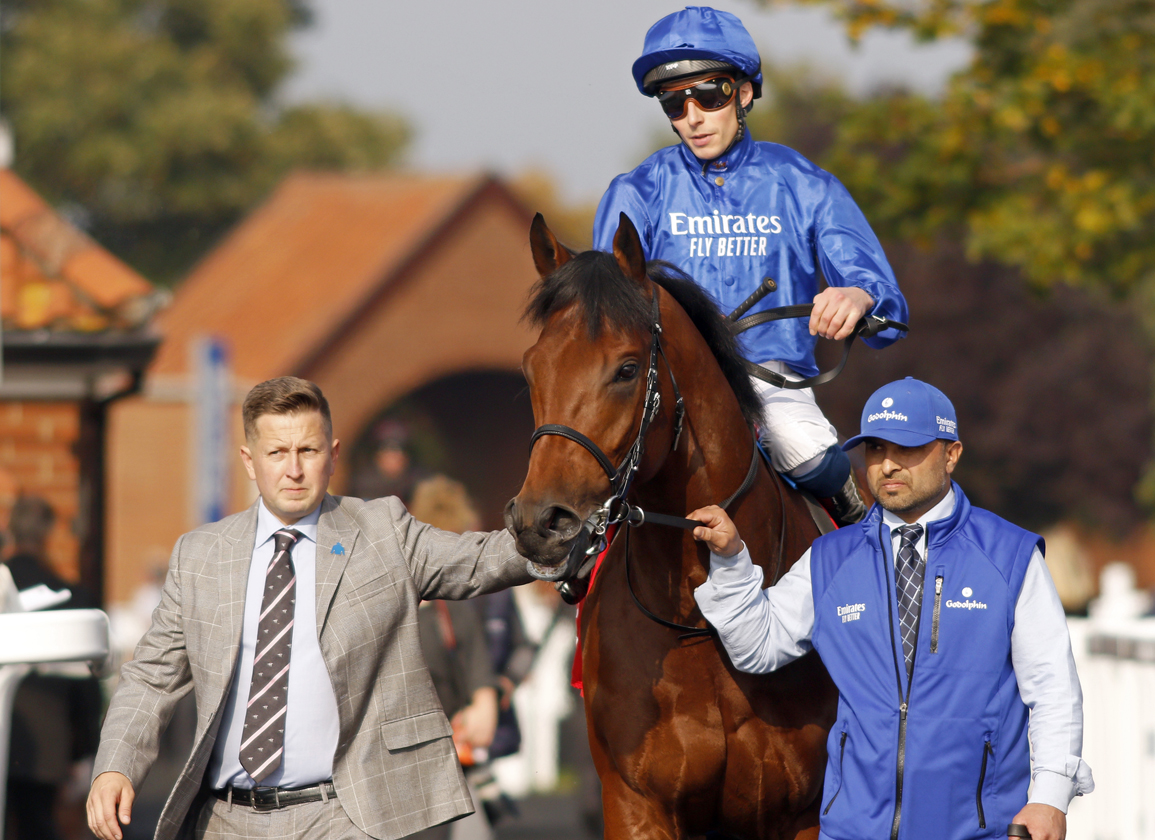 With Goldspur (Ire) (Dubawi {Ire}) having provided the warm-up act in the G3 Godolphin Flying Start Zetland S., the impressive Coroebus (Ire) (Dubawi {Ire}) duly extended the domination of Godolphin's Charlie Appleby stable on Future Champions Day in the G3 Emirates Autumn S. Caught close home having shown above-average acceleration in the G2 Royal Lodge S. over this course and mile trip last time Sept. 25, the imposing homebred was in last from the break this time with the anchor down. Despite racing away from the pace throughout, the 4-5 favourite tanked to the front with William Buick unable to contain him any longer 1 1/2 furlongs out and from there he was in a class of his own en route to a two-length success from Imperial Fighter (Ire) (The Gurkha {Ire}), with Dubai Poet (GB) (Lope de Vega {Ire}) 2 1/2 lengths away in third. “The last day, he surprised me how fast he picked up and we were aware of that today and rode him accordingly,” Buick explained. “I didn't think they went very quick and expected the dash to be on three down and it was, but there was nothing there to take me and again he got a bit lonely in front. He can really turn it on and horses like that can't sustain their run for very long, but you can sit on him until the last furlong and a half and he showed that today. He cruised down the dip and when I pressed the button it was all over. He's a lovely big horse and he'll come back better and stronger after the winter.”

Coroebus, who was off the mark on his only other start over this trip on the July Course Aug. 13, is to join the day's G1 Darley Dewhurst S. hero Native Trail (GB) (Oasis Dream {GB}) in the mile Classic here next May in what promises to be a fascinating encounter. “William was very disappointed after the Royal Lodge, but you can blame me as I told him to get him rolling into the dip on that fast ground and so he got racing a bit sooner than he wanted,” Appleby said. “He had always impressed us at home and he travelled for fun that day–I wasn't disappointed, as it's all about the group 1s and if they get beat on the way so be it. William said he came too good again today, but there was always going to be a time to press the button and he's a different animal now. He was a big raw baby in the Royal Lodge, but he's more the finished article today.”

Intriguingly, his trainer was effusive about Coroebus even after Native Trail had garnered the day's feature and added, “They are two nice colts and to have these results in half an hour is what it's all about,” he added. “They are both big colts and one could do better physically than the other over the winter and need a trial more, while one could get more athletic in that time and go straight there, it's too hard to say now. It's a long way off, but I do like Coroebus. He's a supreme traveller and although you cannot fault what Native Trail has done, you've got to be able to travel in a Guineas and what Coroebus does have is a high cruising speed. You'll never take him off the bridle before the two-pole.”

“He's a horse who has always been exciting–even in the spring he was doing stuff he shouldn't have been doing for the size of him. I could have run him in May if I'd wanted to,” Appleby continued. We'll put him away for the winter and look forward to the spring. It doesn't worry me if he doesn't have a Guineas trial, but I'd imagine we will probably just to give him that edge going into it. He wouldn't want much further than a mile. If anything, when he strengthens up he'll get quicker.”

Coroebus is the second foal out of the G3 Oh So Sharp S. scorer First Victory (Ire) (Teofilo {Ire}), who is one of five black-type winners out of the top producer Eastern Joy (GB) (Dubai Destination). They include the four-times group 1 and grade I-winning Godolphin flagbearer Thunder Snow (Ire) (Helmet {Aus}), the G2 May Hill S. winner and G1 1000 Guineas-placed Ihtimal (Ire) (Shamardal) and Always Smile (Ire) (Cape Cross {Ire}) who was runner-up in the G1 Sun Chariot S. and third in the G1 Falmouth S. The third dam is the G2 Sun Chariot S. winner Red Slippers (Nureyev), a full-sister to the G2 Jockey Club S. winner and G1 Epsom Derby-placed Romanov (Ire) and a half to the G1 Irish Derby and G1 Epsom Oaks heroine Balanchine (Storm Bird) who was responsible for the G1 Prix de Diane heroine West Wind (GB) (Machiavellian). First Victory's yearling colt is by Shamardal.