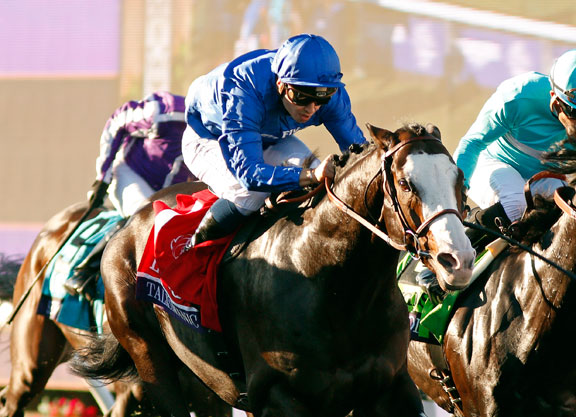 DEL MAR, CA–Trainer Andre Fabre pulled the biggest upset in Breeders' Cup history when Arcangues (Sagace {Fr}) won the 1993 Classic at odds of 133-1, and while Talismanic (GB) (Medaglia d'Oro)'s price of 14-1 in Saturday's GI Breeders' Cup Turf was nowhere near those proportions, the master French trainer yet again found himself on the winning end of a longshot gamble. The white-faced dark bay had turned heads all week at Del Mar and had been named 'Best Turned Out' prior to the $4-million Turf, and he soon made his 19-length defeat in last year's G1 Prix de l'Arc de Triomphe look a distant memory. In fact, he had made marked improvement this season, hitting the board in all six starts including a win in the G2 Prix Maurice de Nieuil in July. Moving off the rail to race alongside defending winner Highland Reel (Ire) (Galileo {Ire}) when they turned into the stretch, Talismanic kicked away from that rival and overtook second-favourite Beach Patrol (Lemon Drop Kid) inside the final furlong to win by a half-length, with Highland Reel sticking on for third.

It was a good day for Godolphin, which just two weeks ago was officially crowned leading owner in Britain for the season. Wuheida (GB) (Dubawi {Ire}) ensured that trainer Charlie Appleby has been successful in each of his two trips to the Breeders' Cup. He won the G1 Juvenile Turf with Outstrip (GB) (Exceed and Excel {Aus}) in 2013 in his rookie season, and returned to the meeting for the first time since this weekend with Wuheida and Friday's Juvenile Turf sixth Masar (GB) (New Approach {Ire}). Wuheida had ventured to four countries for four prior starts this year–England, Germany, Ireland and France–looking for her preferred fast ground, and she overcame odds of 11-1 on Saturday when she at last got it. The connections of Rhododendron (Ire) (Galileo {Ire}) will be bemoaning that this race was shortened to 1 1/8 miles this year as the G1 Prix de l'Opera winner was a closing second.

Two races after Rhododendron made late progress to grab second in the Filly & Mare Turf, the same connections' Lancaster Bomber (Ire) (War Front), who had served as pacemaker for Churchill much of this season, outran his 13-1 odds to finish second in the GI Mile. Suedois (Fr) (Le Havre {Ire}) and Ribchester (Ire) (Iffraaj {GB}) were fourth and fifth, respectively.

The GI Turf Sprint held no joy for the Euros. G1 Nunthorpe S. winner Marsha (Ire) (Acclamation {GB}) failed to land a blow while racing down the outside in the stretch, finishing sixth, while Washington DC (Ire) (Zoffany {Ire}) made some headway up the rail from last but could do no better than eighth. He was one spot ahead of the favoured G1 King's Stand S. winner Lady Aurelia (Scat Daddy), who flattened out after stalking the pace. Dual Group 1 winner US Navy Flag (War Front) dueled for the lead in the GI Juvenile in his first try on the dirt, but was struggling as they turned into the stretch and faded to tenth. Dual Guineas winner Churchill (Ire) (Galileo {Ire}) failed to land a blow in his first dirt try and likely career swangsong in the $6-million GI Classic, finishing a distant seventh. The 3-year-old retires to Coolmore next year.