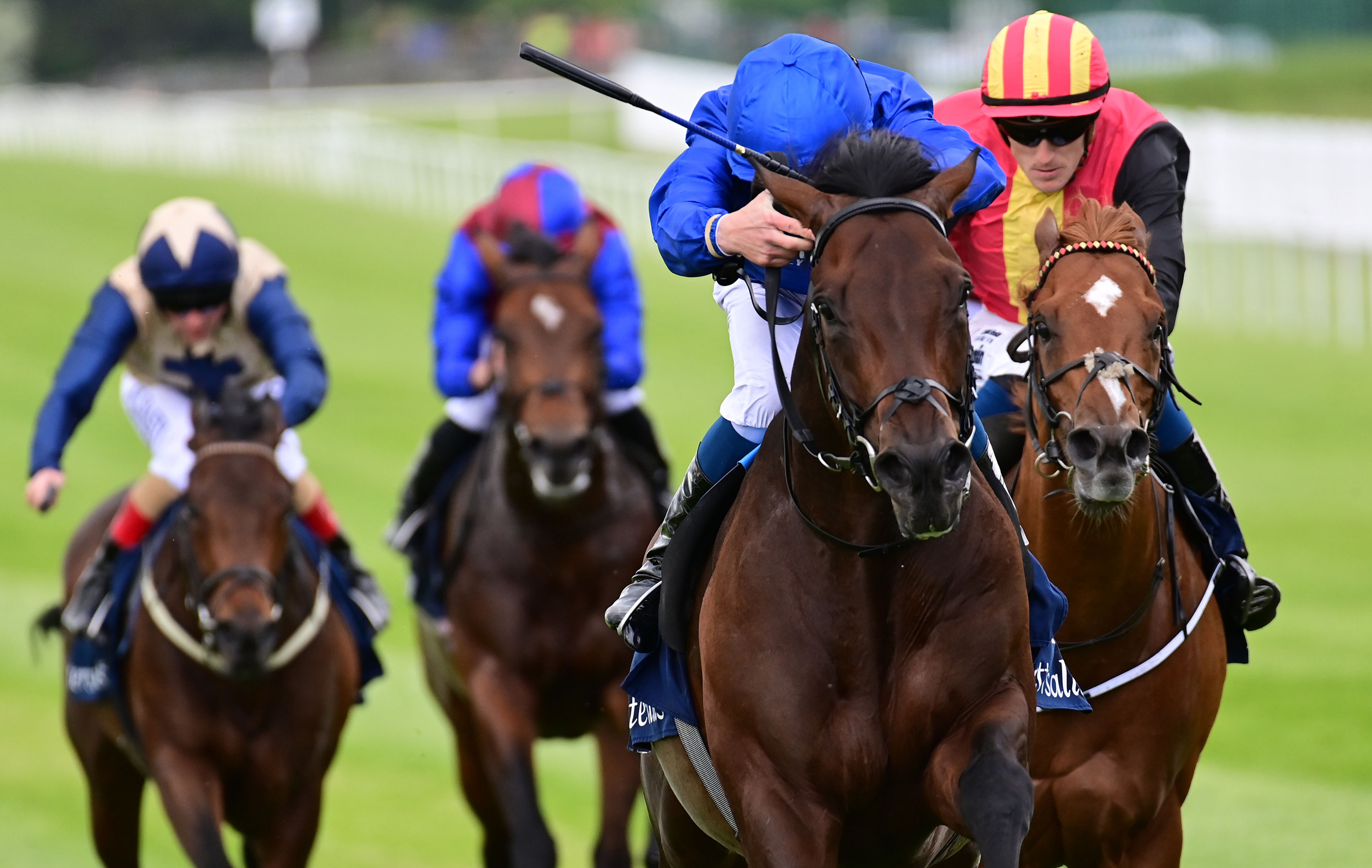 With Coroebus (Ire) (Dubawi {Ire}) and Modern Games (Ire) (Dubawi {Ire}) setting it up for him, Native Trail (GB) (Oasis Dream {GB}) carried the heavy burden of hope into Saturday's G1 Tattersalls Irish 2000 Guineas at The Curragh but with William Buick at his coolest the trinity of Guineas victories was completed with a degree of comfort. While the winning performance was not much more than workmanlike as the champion juvenile of 2021 grafted to deny the outsiders New Energy (Ire) (New Bay {GB}) and Imperial Fighter (Ire) (The Gurkha {Ire}), the take-out was the unprecedented achievement of Charlie Appleby collecting the three group 1 2000 Guineas of Europe in England, France and Ireland with three different colts. “Coming into today as calm and collected as you try to be, I knew what we were trying to achieve,” his trainer said. “Firstly trying to win a Guineas but, dare I say, trying to make history. That's what this horse has done for the whole team today.”

Imperious when winning the G1 Vincent O'Brien National S. here in September, Native Trail was flying high by the time he hit the lids for the 2000 Guineas with Newmarket's G1 Dewhurst S. and G3 Craven S. also in the satchel. It can be argued now that all three of those contests have suffered from knocks to the form, but in the instant that he could only split Coroebus and Luxembourg (Ire) (Camelot {GB}) in the Apr. 30 Classic there was an air of deflation surrounding fans of the giant-striding bay. Connections refused to lose any faith and with the 2000 Guineas-Poulains-Irish 2000 Guineas masterplan laid out at Moulton Paddocks the wave of positivity seemed sufficient to carry Native Trail to glory here.

Any fears that Buick might be prisoner to tactics were certainly not troubling the man himself, whose career has taken another trajectory this season and who rode here with the calm of one of the all-time greats. Staying behind and on the rail, he kept the favourite in his own rhythm with main market rivals Ivy League (Ire) (Galileo {Ire}) and Buckaroo (GB) (Fastnet Rock {Aus}) to his outer and the 100-1 shot Malex (GB) (Kodiac {GB}) taking up front-running duties. There was a point three out when Ryan Moore on Ivy League looked as if he might be able to keep him pinned in, but Native Trail is an imposing prospect at the best of times and was coming out no matter what.

As TDN Rising Star Wexford Native (Ire) (Teofilo {Ire}) stretched on with Kevin Manning looking to escape, it was fellow TDN Rising Star New Energy who loomed as a genuine danger in the slipstream of Native Trail and despite the much-improved effort of the runner-up he found that giving a headstart to the winner was always a losing battle. “He is an exceptional horse and a joy to ride–he's uncomplicated and is there when you need him,” Buick said. “I knew from a fair way out I would be having to work my way out, but I had the horse to do it as he's got plenty of size and it was actually very straightforward. On faster ground, you might have seen a more explosive performance as this ground blunted his turn of foot a bit. He will get a mile and a quarter.”

Appleby was not ruling out another stand-off between the stable's Newmarket one-two in the G1 St James's Palace S. at Royal Ascot. “In all sports, you like to see the best two take each other on, whether it be tennis or football teams. At the moment these colts are the best around over a mile, so you'd like to see them have a crack at each other,” he said. “He lost nothing in defeat at Newmarket–Coroebus is a horse we thought highly of and had they be drawn together it could have been a closer contest. We'll never know that, but this horse doesn't have to prove himself any more. We all know that the St James's Palace is a fantastic race and the last chance for these three-year-olds over a mile to compete against each other.”

In his customary humble manner, Appleby was keen to share around the praise for the feat. “When I saw him cross the line today, I have to say it was a sigh of relief to say he's got the job done,” he added. “It's amazing–the team at Moulton Paddocks have done a fantastic job all winter and this horse has never missed a beat. I was confident in William, as he knows him so well and has rode him all of his racing career and plenty at home. He knows what this horse can do.”

Whether Native Trail lines up at Royal Ascot, New Energy who is like the winner a breeze-up purchase is likely to be there according to trainer Sheila Lavery. “We could always have dropped back to the Jersey, but we put him in the St James's Palace so why not live the dream,” she said. “I'm delighted for John [Lavery, owner and brother], who has put so much money into it and faith in me. Billy [Lee] gave him a beautiful ride and the only thing is my heart goes out to Robbie Colgan, who would have been on him except that he got injured off a horse at my place a couple of weeks ago. I was really looking forward to running him, he has run four times, won his maiden here first time but in the other races he hasn't been able to get a proper lead. In the Tetrarch he had to lead and we weren't quite sure exactly what we had. Billy thinks he's still going to improve from that, because he'll have learned from that.”

Andrew Balding said of Imperial Fighter, who was recording a career-best, “He probably, ideally, could have done with the ground even softer, but he is fairly versatile,” he commented. “I was thinking we could go a mile and a quarter in the [G3] Hampton Court, but it depends. If Ben [Coen] says a mile is his trip, he won't be going there.”

A triumph for the Breeze-Ups, Native Trail who was in hindsight a bargain 210,000gns purchase at the Tattersalls Craven Sale is the first runner for the unraced Juddmonte cast-off Needleleaf (GB) (Observatory) who was bought by the MAB Agency for only 60,000gns at the 2015 Tattersalls December Mares Sale. She is a full-sister to the G1 Haydock Sprint Cup heroine African Rose (GB) and the G3 Prix d'Aumale winner and G1 Prix Marcel Boussac runner-up Helleborine (GB), who was in turn responsible for the G2 Coventry S.-winning sire Calyx (GB) (Kingman {GB}). African Rose also became a stakes producer herself, throwing the talented G3 Princess Margaret S. winner Fair Eva (GB) (Frankel {GB}).

The second dam New Orchid (Quest For Fame {GB}), who was third in the G3 Lancashire Oaks, is a daughter of Musicanti (Nijinsky II) who also produced the 1999 Dewhurst hero and sire Distant Music from a mating with Observatory's sire Distant View. Musicanti is kin to the GI Jockey Club Gold Cup, GI Washington D.C. International and GI Suburban H.-winning champion Vanlandingham (Cox's Ridge) and to the dams of the GII Keeneland Turf Mile and G2 Prix Eugene Adam-winning sire Kirkwall (GB) (Selkirk) and to the GI American Oaks heroine Funny Moon (Malibu Moon). From the family of the GI Belmont S. hero and sire Temperence Hill, Needleleaf's 2-year-old filly Tranquil Rose (Fr) by Calyx's sire Kingman was bought by Godolphin for €950,000 at the Arqana Deauville August Sale. She also has a yearling filly by Siyouni (Fr).