Global Group Of Trainers, Jockeys Reflect On The Pandemic 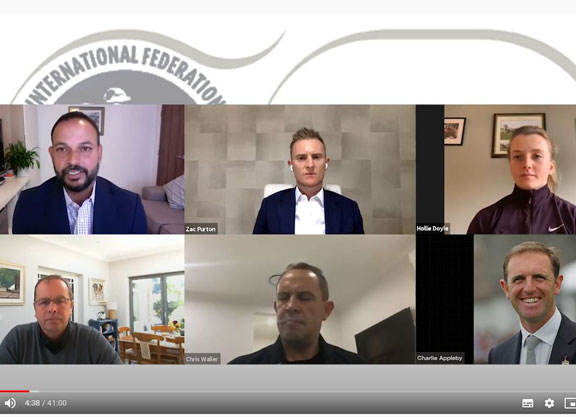 Racing has been fortunate to forge ahead in 2020 without crowds, but it is imperative that they return as soon as possible. That was one of the overriding themes of the third panel of the virtual International Conference of Horseracing Authorities released on Monday and entitled “Participating and working in racing during a global pandemic.” Moderator Rishi Persad spoke with trainers Charlie Appleby, Chris Waller and Ger Lyons as well as jockeys Hollie Doyle and Zac Purton about the experience of being a racing professional in 2020.

“When the country was in lockdown we'd probably be what you termed the lucky ones, because we were out carrying on as normal,” Lyons recalled of the early days of the pandemic. “You could feel it in the staff that they knew they were doing a normal day's work while everyone else was in lockdown, so that actually became a positive. The initial fear was that we weren't going to get back racing, but they worked wonders and got us back racing relatively early. I think they did a great job and rescued a season that looked like it was in turmoil.

Appleby described reacting to the crisis while part of his team was in Dubai.

“The situation arrived in the spring when we were in Dubai so we were just at that crossover point with the horses and our staff shipping back,” he explained. “We already had the majority of the team back in the UK and a small team still in Dubai to look after those horses that were due to participate on Dubai World Cup night. So it was making sure first and foremost that they were alright and comfortable with what they were doing.

“Similar to what Ger mentioned, we're lucky with the industry we're in that we're outdoors. So that was a plus, but you still have to address it in the correct manner with the staff and make sure they're comfortable in coming to work and also that their families are comfortable with them doing that as well.”

Waller described the experience of going racing in Australia without crowds.

“It was quite surreal, but it was good because everyone was watching racing,” he said. “We were lucky in Australia, we were the first sport up and running; we didn't stop. Australia was locked down and for at least two months there was no sport whatsoever. So racing stood tall and for all the right reasons it was seen to be a responsible sport. Through that we got a lot of good recognition. We saw that responsibility and carried it through.”

Waller was quick to praise his country's governing bodies, particularly those in New South Wales.

“It's all about good administration, not just in dealing with global pandemics but in racing in general,” he said. “That's where the world needs to come together and see the countries that are doing well and the ones that are struggling and figure out why. We're all beneficiaries of those good administrators and it's sad to see some countries lagging behind.”

Waller said Australia's experience dealing with a shutdown of racing in 2008 due to the equine influenza outbreak likely helped lay the foundation for the path forward this time.

“Going back in Australia to 2008 we had the equine influenza, and that did shut racing down,” he said. “I think that made the government stand up and realize how important racing is to the economy and society. We stopped racing for about three months and there was a lesson there to make sure we support racing. I think just as much as having good administrators it is about having a good relationship with the government.”

Another district that has continued to race throughout the pandemic is Hong Kong. Leading local rider Zac Purton described how international punters latched onto the product.

“One of the byproducts of the commingling that the Jockey Club has brought in here in the last few seasons has been that when other countries were not able to go ahead with their sports and different products, they were all of a sudden locked into what we were doing here in Hong Kong and commingling went through the roof,” he said. “We benefitted quite a lot from it. Our prizemoney remained the same and it's actually gone up this year.”

Doyle and Lyons have each experienced major career milestones this summer at spectator-less meetings, and they reflected on those experiences. Doyle, who has ridden her first Royal Ascot winner and group-race winner this year, noted that the quiet has been good for some horses but a hindrance to others.

“At Ascot, for example, I had a 2-year-old running that I thought, 'this will be ideal with no crowd. He's a bit hot-headed, this should suit him.' And it did,” she said. “But on the other hand I had an old handicapper running and he's like the yard hack at home, you wouldn't even think he's a racehorse. But he comes alive at the races with the crowd and atmosphere. I rode him at Ascot and he was just like the old hack at home; he never came alive. So I think it affects horses in different ways.”

Lyons won his first Classic in June with Siskin (First Defense) in the G1 Irish 2000 Guineas and his second with Even So (Ire) (Camelot {GB}) the next month in the G1 Irish Oaks.

“It's just typical me to win the two Classics in a year where there's no crowds and prizemoney is cut,” he said.

“First and foremost, racing is about the owners in my opinion and you need owners,” Lyons added. “Myself or Chris or Charlie as trainers will handle no crowds and it's possible we can actually do our work better on a raceday with no crowds. But we'll all agree that racing won't survive without crowds and we need people to come racing. You need an atmosphere and we need crowds back for the whole game to survive.”

Appleby added, “The word Ger used there that summed it all up was atmosphere. If you're lucky enough to have a winner, as much as you get the satisfaction of winning the event, you get an immense sense of achievement when people are applauding yourself, the horse, the jockey, the owner. That's very missed on those big occasions. We're racing, which is the main thing, but in a sporting industry crowds are very important.”

One of the rules imposed on jockeys by the British Horseracing Authority from racing's resumption in June was that jockeys would be permitted to ride at just one meeting per day. That became an industry talking point over the summer with many riders touting the benefits-both for career advancement and mental health. Doyle reflected on the rule, saying, “I think it swings both ways. For me now I have a retainer so it's a bit complicated. For example, if he has a runner somewhere and Archie [Watson], who is also my boss, has a runner somewhere else, it is a bit annoying that I can't ride for both, but I think from a mental health side of things it's a lot nicer on everyone. I've picked up better spare rides on Saturdays, for instance, because the top blokes can't do two meetings.