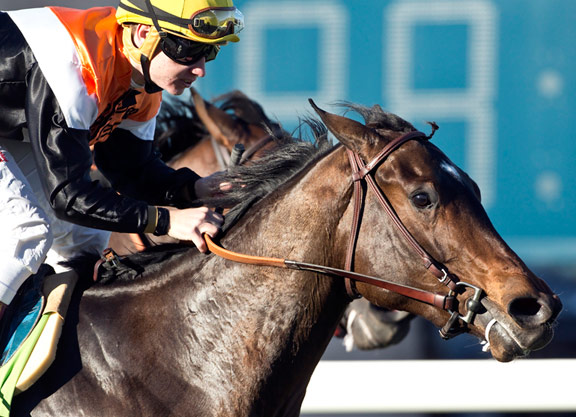 After a pair of impressive victories by homebreds Family Meeting (Sky Mesa) and Chiropractor (Kitten’s Joy) at Del Mar Saturday and with several other promising young runners in the pipeline, it looks like 2016 could be a banner year for Glen Hill Farm and trainer Tom Proctor.

The 2-year-old filly Family Meeting got the ball rolling Saturday afternoon when producing a powerful late run to capture the GIII Jimmy Durante S. at odds of 37-1 (Video).

“We thought she would run really well,” Glen Hill Farm’s Craig Bernick told the TDN Tuesday afternoon. “She only had three weeks between the race in Maryland [Nov. 7] and the [Jimmy Durante]. We wouldn’t have put her on the plane if we didn’t think she would run well and we didn’t think she was a really good horse. I was really surprised at the number she got in that race in Maryland and sort of figured she would be a big price. I think the poor figure she got and bad post [breaking from the 12-hole in the Jimmy Durante], maybe just contributed to her price. I wasn’t surprised that she won at all. She’s a pretty nice filly and came out of the race great.”

Fourth on debut sprinting over the Delaware main track Sept. 30, Family Meeting earned her diploma next out when switched to the turf at Laurel Nov. 7. The bay’s next start is undetermined at this time, but Bernick has high hopes for the filly’s sophomore season.

“There are not a lot of races because she is a Grade III winner already,” Bernick remarked. “There are not a lot of named stakes in California for her. There may be some that pop up as overnight stakes, but I don’t see a race in California until April that is for a 3-year-old filly on the turf. There are a few races in Florida and she is Florida-bred, so we may go that route. There is the Tropical Park Oaks, which is [Dec. 19] at Gulfstream, and then the [GIII] Florida Oaks at Tampa [Mar. 12] is a good race. I hate to send a horse out to California and then ship them right back, but the fact that she won may mean that is what we have to do due to the lack of a stakes program out there for her until the spring.”

Talented sophomore Chiropractor made it a day to remember for Glen Hill a few races later with a determined victory over March (Blame) and a dozen other runners from across the country in the GI Hollywood Derby (Video).

“His last two races, when we put the rider up in the paddock, he acted really poor and sort of lost his race before he even got in the starting gate,” Bernick said of the colt, who went off at 14-1 Saturday. “His race was also three weeks out, so he didn’t need a lot of training, but they did a lot of schooling. They shipped to Santa Anita and then they would bring him down to Del Mar every week just to school him and get a rider up on his back while the races were going. He went to the post perfect on Saturday. He obviously ran his best race. He had been running against older horses and even with his antics, he was performing pretty well. He was second last time and ran a good number. He probably should have won, but he got a bad trip and lost it in the post parade. We thought if we could get him to the post in order, he would run a good race and obviously he did. He beat a bunch of good horses and to step up from an allowance race to a Grade I and win is phenomenal.”

A second-out graduate at Delaware June 17, Chiropractor made a pair of allowance starts against fellow sophomores at Del Mar, finishing second Aug. 8 and coming back to win just 22 days later. Taking on older rivals in his next two outings, the chestnut finished fifth at Santa Anita before checking in a hard-luck second last time over this course and distance Nov. 28 behind Sunday’s GIII Berkeley H. winner Poshsky (Vronsky).

“He woud have won that [last] race with a good trip and he acted a little bit like a lunatic before that last race,” Bernick remarked. “We thought if we could get his behavior right we wouldn’t have much problem stepping him up from the allowance race to the Grade I. He was running against older horses and was the only 3-year-old in the field and a lot of those horses had been running in stakes. I didn’t look it as as large of a jump as some people from the two-other-than because he was running against straight 3-year-olds [in the Hollywood Derby.”

The gelding exited Saturday’s race in good order and will remain in training in California for next season.

“He came out of the race great,” Bernick enthused. “He has been coming out of his races really well and growing. He’s just a really good horse. There is a race Jan. 2 at Santa Anita [the GII San Gabriel S.]. It is a mile and an eighth [on the turf] against older horses. He will run there if everything is okay.”

Family Meeting and Chiropractor may be the latest Glen Hill runners to prove their talent, but the Ocala-based outfit still has a few more tricks up his sleeve with several promising juveniles preparing to run. In addition to their string of 2-year-olds, Glen Hill Farm also has a pair of well-bred females looking to take the next step up.

“[MGISW] Marketing Mix (Medaglia d’Oro)’s [half] sister, she’s a 3-year-old, she won an allowance at Aqueduct [Nov. 4],” Bernick said. “She will run in a stake in Florida. Her name is Promotional (Artie Schiller) and she looks like a really nice filly. Theatre Star (War Front) is going to run in [the GIII Monrovia at Santa Anita Jan. 3]. She will race another time or two before she is bred. She is going to Medaglia d’Oro. We hope to get her a graded win. She is really well bred. She is a half-sister to [GIII Go For Wand H. winner] Taris (Flatter) by War Front. She is a stakes winner and graded placed, but hasn’t won a graded stakes yet, so we hope that she can before she retires.”