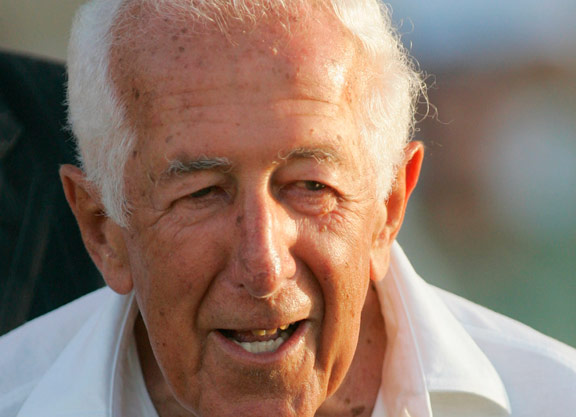 That was the motto of self-made entrepreneur, World War II combat veteran, racehorse owner/breeder and philanthropist Leonard H. Lavin, who died at age 97 Wednesday, Aug. 2, surrounded by his family at his home from complications related to pneumonia.

Although Thoroughbred endeavors occupied only a slice of Lavin's richly diverse life, he enjoyed immense pleasure from founding Glen Hill Farm in Ocala, Florida, in 1966. A half-century later, Lavin was honored with the 2015 Eclipse Award of Merit for his decades of service within the Thoroughbred industry.

Craig Bernick, Lavin's grandson, who has overseen the daily operations of Glen Hill since 2008, confirmed Lavin's death via phone Thursday, explaining that his grandfather passed while surrounded by family members.

“Most people couldn't live to 97 and do a tenth of what he did,” said Bernick. “He was a very tough guy, he did a lot of things in the Thoroughbred business and helped a lot of people.  He could not have lived a fuller life. He really loved horses and horse racing. He wasn't the kind to buy 'made' horses. He really liked mining for gold and making his own horses.

“He liked racing, but he really liked being at the track in the mornings and the days on the farm,” Bernick continued. “He loved the process and being around the horses. He wasn't one of those guys who'd just show up on days he was favored for the stakes race. He appreciated people and treated everyone well. He grew up going to the track and never forgot it.”

Born in Chicago Oct. 29, 1919, Lavin came of age during the Great Depression. As a 9-year-old in 1928, his father took him on a train from Chicago to see Reigh Count win the GI Kentucky Derby. As a teenager, he skipped school to bet on Equipoise when he ran at Washington Park or Arlington Park.

Lavin studied at the University of Washington prior to serving in the United States Navy during World War II,  and he participated in a dozen Pacific invasion maneuvers. When the war ended, Lavin embarked upon a career as a salesman, but quickly discovered he would rather own a company than work for one. He purchased a fledgling West Coast-based beauty supply firm called Alberto Culver Corporation, which would come to be nationally known for a hairstyling product called VO5 (for five vital oils). Over decades, he grew that regional company into a Fortune 500 corporation.

As a young man, Lavin had dreamed of one day being able to own racehorses. But because the commercial market in the 1960s didn't allow for newcomers to gain a significant foothold by buying top horses from well-established generation-to- generation breeding families that preferred to race their best stock, Lavin made a go of starting from scratch by buying a few bargain yearlings, then later selecting his own matings and raising the offspring himself.

Lavin counted among his racing career highlights a 1972 match race victory by his filly Convenience over national champion Typecast, which drew more than 50,000 people to Hollywood Park.

Yet among some 184 stakes wins at 28 tracks, Bernick said his grandfather's proudest moment was winning the GIII Equipoise Mile with homebred Split Run in 1993.

That's because that race coincided with the 50th reunion of Lavin's naval shipmates aboard the USS DuPage, and 100 of the men he fought alongside in battle made the trip to Arlington Park for the race.

“The 50th year reunion was a big deal, and the reunion was being held in Chicago and he took everyone to Arlington,” Bernick recalled. “I know it was wonderful for him to win that race. Obviously he'd won bigger races, but that was a special day for him.”

In 2008, Lavin appointed Bernick as president and chief operating officer of Glen Hill, but he remained very much involved in an advisory role.

“It's very unique for a founder to turn over control of his business, but my grandfather felt I would benefit from his guidance, which has proven true,” Bernick said when he accepted the 2015 Eclipse Award on Lavin's behalf. “He has been a hard, but fair boss. Our disagreements have been about horses, never business principles. Those have been consistent and straightforward: be a man of your word, pay your bills on time, be patient with horses, stand up for what you believe, whether it's popular or not, [and] never suggest an idea to someone that you wouldn't do yourself. Most of all, he has stressed that Glen Hill Farm is an extension of the Lavin and Bernick families, so make sure everything associated with it is done properly and with class.”

In a prepared statement that accompanied the acceptance of his Eclipse Award, Lavin wrote this: “From the normal Thursday cards to racing in the Breeders' Cup and everything in between I have found every moment to be a thrill and a reward. With that has come the wonderful relationships made with people throughout the industry, the camaraderie with our team at Glen Hill Farm, and of course the horses we've had the pleasure of breeding, owning and racing. And now this award provides a capstone that leaves me both humbled and grateful.”

The Breeders' Cup also honored Lavin, saying, “Leonard Lavin was an enormous success in nearly every aspect of his full and remarkable life. Whether it was taking a small cosmetics beauty supply company and turning into a major consumer products giant in Alberto Culver Company or developing Glen Hill Farm into a prominent Thoroughbred racing and breeding operation, Leonard Lavin's determination and entrepreneurial spirit made him a winner in so many ways. As an owner, Mr. Lavin raced more than 80 stakes winners with such prolific horses as Relaunch, Convenience, Rich in Spirit, and Breeders' Cup champion One Dreamer. Mr. Lavin also made a significant impact on the Breeders' Cup as one of the first and enduring marketing partners of the World Championships in a sport that he loved and cherished. We remember all of his accomplishments with great pride, and extend our deepest sympathies to the Lavin family.”

Beyond the world of racing, in 1997 the Illinois governor awarded Lavin the Order of Lincoln, the state's highest honor, in the area of Business and Industry. Lavin also authored a book, Winners Make It Happen: Reflections of a Self-Made Man. He supported a number of charities (both inside and outside of racing), made major donations to various educational institutions, and was keen to provide financial support to victims of Hurricane Katrina.

Despite declining health, Bernick said that his grandfather had made three trips to the Florida farm this past winter and spring.

“He was in good shape, not great, but he never stopped going,” Bernick said. “His body had deteriorated, but his mind was still there. Even [Wednesday], he knew that we had [recently] won a couple of races at Del Mar, and knew we had horses in [Thursday].”

Lavin's funeral services and burial will be private. A public memorial service is in the planning stages for late next week at the Lavin Family Pavilion at the Northwestern University downtown medical campus in Chicago.