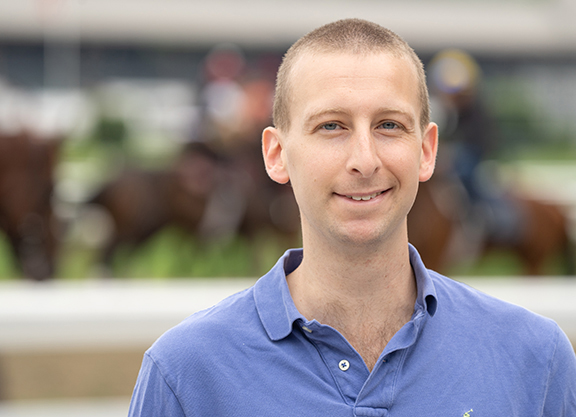 For the past week leading up to Giving Tuesday, the TDN has been offering space to charities providing services to the people and animals in the racing industry.
We invited charities to submit their stories, annual appeals, and holiday fund-raising drives so that our readers could make educated decisions about their Giving Tuesday donations.

Today, we thought we’d run one more appeal for the charity closest to our own hearts: Ben’s stall.

By now, regular TDN readers know the story: we lost our News and Features editor, Ben Massam, on November 1 to cancer. He was 31, and it was Breeders’ Cup day, which somehow made it even more heartbreaking, as Ben loved Breeders’ Cup day.

At his interview Breeders’ Cup week in 2014, we asked Ben if it would be a problem working nights and weekends. He was 26 at the time, and we worried that poring over race results when others were out with their friends wasn’t what the young people wanted to be doing.

But Ben said, “Right now, I stay in Friday nights and do my handicapping, and then I watch all the racing on t.v. on Saturday and Sunday.” When we told him that that’s exactly what his job description would be, he was in heaven.

And so were we, to have him for the five years we did.

When he passed, we searched for a way to honor and remember him, and decided to name a stall at New Vocations at Mereworth Farm in Lexington, Kentucky. The stall sponsorship program is part of New Vocations’ capital campaign to build the nation’s premier racehorse aftercare facility in the heart of the country’s racing and breeding region. (Read more about the program here.)

The stalls at the facility provide a safe landing for the hundreds of horses that go through the New Vocations program on their way to a new life, serving as their temporary home while they are being retrained for a new career.

We’re sure that there will be one or two of them who will pass through the stall that Ben came across while handicapping, which he continued to enjoy right up until his last days. We thought that it would make him happy. And we hope that somewhere, it does.