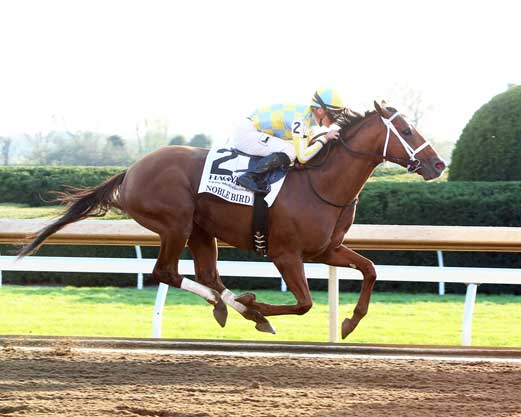 John Oxley's Grade I-winning millionaire Noble Bird (Birdstone–Anyhow, by Tiznow) has been retired and will take up stud duty at Ocala Stud in Florida. A fee will be announced at a later date.

“Noble Bird is a Grade I winner that was fast enough to run Beyers of 110, 109 & 108 and set a track record at a prestigious racetrack like Keeneland, where he still holds the 1 1/8-mile mark on dirt,” said Ocala Stud's J. Michael O'Farrell. “He's another tremendous stallion prospect from the racing program of owner John Oxley and trainer Mark Casse, and we're excited to have the opportunity to stand him. Physically, Noble Bird is a handsome, grand-looking horse, and I believe breeders are going to like him.”

A $105,000 FTKJUL purchase, Noble Bird registered a career high with a victory in the 2015 GI Stephen Foster H. The Mark Casse pupil's other top achievements include scores in the 2016 GIII Pimlico Special H., Lukas Classic and GII Hagyard Fayette S., in which he set a new track record at Keeneland. The 6-year-old retires with a record of 23-7-4-0 and earnings of $1,327,945.

Noble Bird will stand as property of Oxley and Ocala Stud and is now available for inspection.