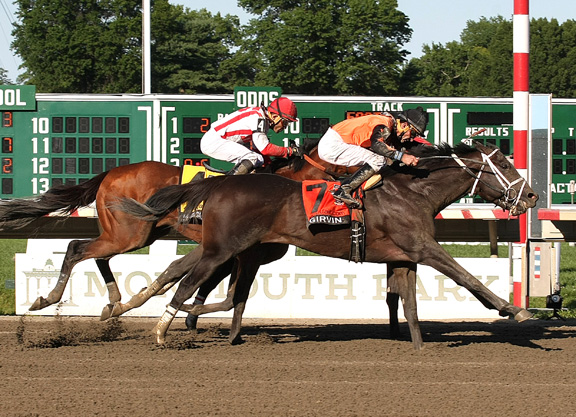 Girvin (Tale of Ekati–Catch the Moon, by Malibu Moon) has been retired from racing and will take up stud duties next year at Ocala Stud, it was announced Thursday. He will stand as property of Brad and Misty Grady's Grand Oaks Farm in partnership with Kentucky's Airdrie Stud in a deal brokered by West Bloodstock.

A $130,000 Fasig-Tipton October grad, Girvin was a debut winner late in his juvenile season for trainer Joe Sharp before annexing the GII Risen Star S. and GII Louisiana Derby early in his sophomore year. His signature win came that July in Monmouth's GI Betfair.com Haskell Invitational S., and he was most recently second in the GIII Steve Sexton Mile S. at Lone Star in May. Girvin retires with a record of 10-4-3-0 and earnings of $1,624,392.

“We've been big fans of Mr. Grady's horse for a long time and are hugely appreciative of the opportunity he's given us to partner on his stallion career,” said Brereton Jones of Airdrie. “Girvin was a tremendously talented racehorse that was versatile enough to out-sprint his rivals at two and stretch out to win the Louisiana Derby and Haskell at three, and he's as gorgeous as he is gifted. Between the Grady family, the O'Farrell family and Airdrie Stud, there will not be a better-supported horse standing in Florida this season. We wholeheartedly believe Girvin's going to reward us for it.”

Bred in Kentucky by Bob Austin and John Witte, Girvin is a half-brother to GSW Cocked and Loaded (Colonel John). His stakes-winning second dam is responsible for stakes-winning juvenile What a Catch (Justin Phillip) and MSP Dubini (Gio Ponti).

“Physically, Girvin is a handsome, grand-looking horse who was precocious and became one of the best and most accomplished 3-year-olds of his generation,” said Ocala Stud's David O'Farrell. “We are excited about having the opportunity to stand Girvin and to work with the Gradys and Airdrie Stud.”